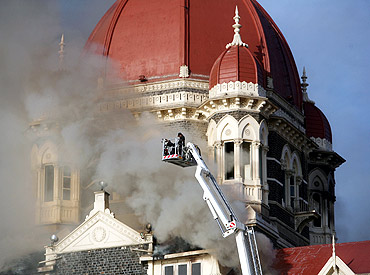 Image: Firefighters try to douse a fire at the Taj Mahal Hotel in Mumbai during the 26/11 terror attacks
Photographs: Punit Paranjpe/Reuters
It has been two years since the horrific 26/11 attacks shook Mumbai and India, but there are still plenty of loose ends in the case thanks to the fact the Pakistani spy agency Inter Services Intelligence and the Lashkar-e-Tayiba relied on operatives from around the globe to execute the dastardly attacks, reports Vicky Nanjappa.

Just when the Indian investigation agencies thought that they had completed the probe in the 26/11 case in record time, the name of Pakistani American LeT operative David Coleman Headley cropped up.

While his interrogation put an end to all doubts as to who conducted the recee for the attacks, there were still some doubts on the financing of the operation, the obtaining of the SIM cards used for the terror communications and also the creation of fake documents.

Today when one takes into account the investigation into the 26/11 case, it looks incomplete, thanks to the fact that there has not been much cooperation internationally.

There has been Italian, Omani, Spanish and Thai connections to the probe and these countries have not yet responded the way India would have wanted them to.

A look at the people whose custody India wants to crack the case: Abdul Al Hooti from Oman, Athar Butt from Spain/Thailand, Mohammad Yaqub Janjua and Aamer Yaqub Janjua from Italy and Tahawwur Rana from the United States.

Barring Al Hooti, all the rest are Pakistani nationals who have settled down in various parts of the globe and have been helping terror groups carry out operations.

Click NEXT to read about these men, their networks and their conspiracies.. 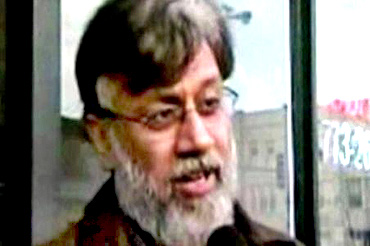 Tahawwur Rana was an associate of the notorious David Headley who conducted a survey of all the targets that were attacked in India.

Indian intelligence agencies feel that interrogating Headley is not sufficient, but they need to get access to Rana as well since he can fill in the blanks.

Although the interrogation of Headley has given India a strong case against Pakistan, Rana would help solve the mystery behind the suspected 'local links.'

Rana was not just involved in the 26/11 attacks, but he has helped survey other targets in different places in the country. It appears that Rana may have taken the help of locals in these recee operations.

Indian agencies are waiting to interrogate Rana, currently under Federal Bureau of Investigation's detention, and if possible also seek his extradition into India.

However, there are various legal formalities, which are being worked out between India and the US. 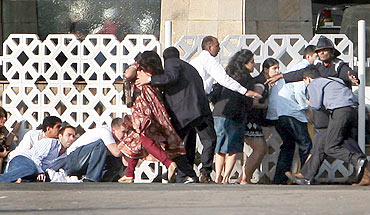 Image: People duck as gunshots are fired from inside the Taj Mahal hotel in Mumbai during the 26/11 terror attacks
Photographs: Punit Paranjpe/Reuters

There was some noise regarding this Omani national. The first leg of the 26/11 probe which concerned obtaining of SIM cards used for terror communications and the information regarding their suppliers led to various places in India, including Kolkata.

Not one of that could be established and there was a huge vacuum when the chargesheet was filed. However, the arrest of Al Hooti in Oman in connection with a plot that he had planned on his mother country led to various other aspects.

Through intelligence channels it had been established that he had used his contacts in India to arrange for the SIM cards.

Another crucial aspect that came to light during his interrogation by Omani authorities was that he had gone around arranging for money to facilitate the 26/11 attacks.

It was a kind of a given that such an important member of the Lashkar-e-Tayiba would be involved with this attack.

This was largely due to the fact that his mother hails from Mumbai and he had visited the city prior to the attack. Although he was aware of the terrain of the city, he was not made part of the recee operations since it would have been too obvious.

However, he was asked to focus on the financing part of the operation and it is believed that he had raised funds through rich businessmen.

A couple of days after his arrest a year back, India made efforts to extradite him. However, that was not possible since he was being tried in a case pertaining to terrorism over there.

Today Al Hooti has been sentenced. Indian agencies say that an extradition at this point of time would be difficult, but modalities are being worked out to interrogate him in Oman, which would give more clarity to the role played by him in the 26/11 attacks.

The Janjuas: From Italy, with terror 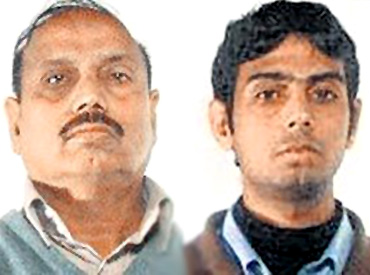 The father-son duo of Mohammad Yaqub Janjua and Aamer Yaqub Janjua, who were arrested in Italy last year, also hold a key to the investigations into the 26/11 attacks. Hailing from Pakistan, this duo was involved in financing terror operations for both the Al Qaeda and the Lashkar.

In addition to this, they had are also alleged to have transferred money to Mumbai a day before the attack. The money is said to have been used to activate the internet phone account which was used by the attackers.

This helped the attackers communicate during the attack.

When the arrests took place, the Indian agencies were confident that this would provide more clues into the operation. A letter seeking permission to interrogate the duo was sent to the authorities in Italy.

However, Indian agencies claim that till date they have not received any reply from their Italian counterparts.

"We will continue to push for the interrogation of these two men since it is crucial to our investigation," intelligence sources told rediff.com. 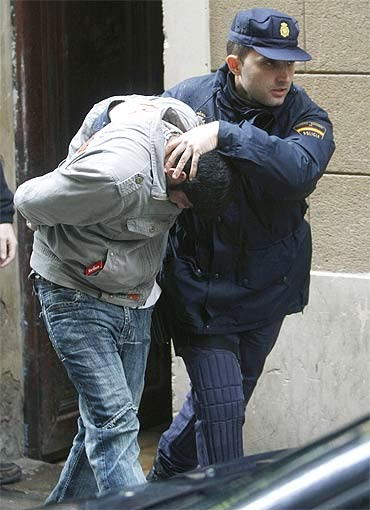 Image: Police officers take an arrested man into a car after a police operation in Barcelona.
Photographs: Albert Gea/Reuters

Athar Butt is the latest in the list of names that India would like to get its hands on. He was arrested in Spain a couple of days back. Operating between Spain and Thailand, Butt and nine others were involved in creating fake documents.

It is believed that they had created documents for the Lashkar terrorists who carried out the 26/11 attacks. Butt was a full-fledged operative for terror groups and had coordinated with local criminals to carry out his job.

He had instructed local criminals to steal documents from tourists and later forged them and handed them over to terror groups.

The Indian agencies say that it has just been two days since the arrest and they would have to wait a while longer before they make a formal request to interrogate these men.

"However, we are on the job and hope to probe these men as well," Indian interrogators say.