A father's fight for his martyred soldier son 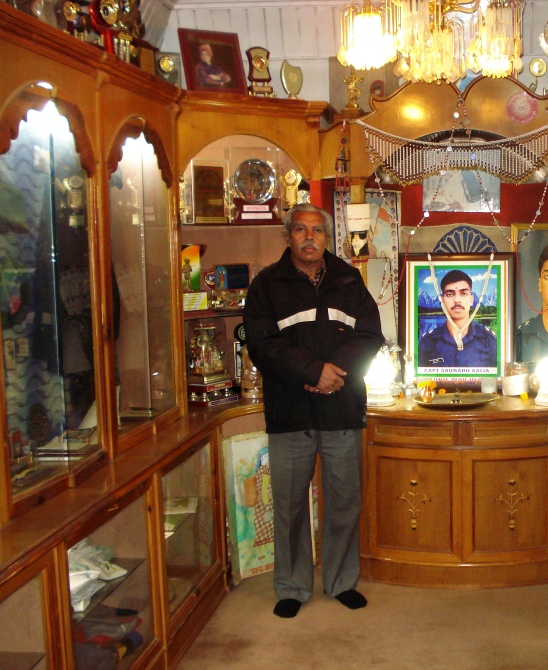 'By pursuing this case, Captain Saurabh Kalia and the five soldiers will not come back to us, but this is the least I can do as a humble citizen of India to honour Indian soldiers,' says Dr N K Kalia on his struggle for justice for his son who was brutally tortured, mutilated and killed by the Pakistan army in the Kargil war.

Kargil's first heroes, Captain Saurabh Kalia, 22, and his patrol of five soldiers were brutally tortured and killed in captivity by the Pakistan army. Their mutilated bodies were returned after 22 days on June 9, 1999 at the peak of the Kargil War.

For 14 years since then, Captain Saurabh Kalia's father, Dr N K Kalia, a retired scientist, has been relentlessly pursuing the Indian government to take up the case with the United Nations Human Rights Council.

Dr Kalia has waged a constant struggle to have this declared a war crime in accordance with the Geneva Convention so that the guilty are punished.

Seeing that the government had not taken appropriate action, he approached the Supreme Court in 2012 seeking its direction to the government to raise his son's case at the International Court of Justice at the Hague.

Continuing his tireless fight, Dr Kalia also filed a petition with the United Nations Human Rights Council along with Rajya Sabha MP Rajeev Chandrasekhar last year and hoped that the government would back his petition.

Last week, the Indian government washed its hands off and said that it would not raise the issue internationally because India was committed to settling its differences with Pakistan only through bilateral talks.

Fully aware that this is an issue between nations and cannot be fought alone, Dr Kalia is not one to give up hope. "I will continue to fight, hoping against hope till my last breath," he says.

"By pursuing this case, Captain Saurabh Kalia and the five soldiers will not come back to us, but this is the least I can do as a humble citizen of India to honour Indian soldiers who serve our country in harsh conditions ranging from minus 50 to plus 50 degrees temperatures everyday," he told Rediff.com's Archana Masih in a telephone interview from his home in Palampur, Himachal Pradesh.

What are you going to do now that the GoI has said it will not pursue this case at the international forum according to the Geneva Convention because this is a bilateral matter between India and Pakistan?

I am basically an optimist by nature and I believe in never say die. Now I pin my hopes on the honourable Supreme Court of India where our case is pending for hearing.

'If the government had displayed its teeth in 1999, Pakistan would not continue indulging in such crimes' 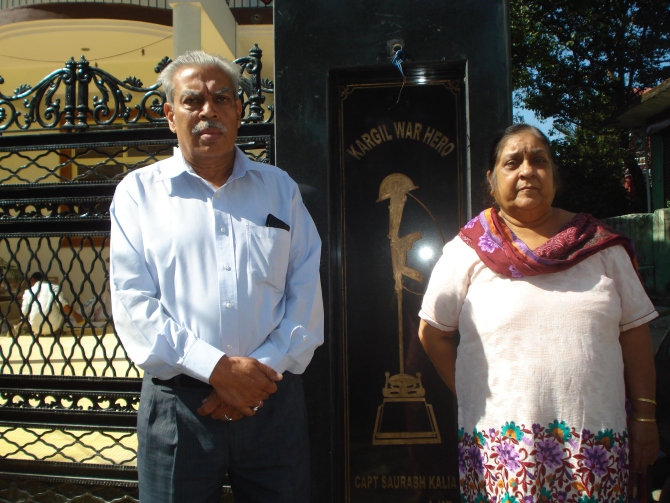 In July 2012 there was an admission by the Pakistan army that was relayed by most of the television channels in India where a Pakistani soldier admitted to killing Captain Kalia and five soldiers.

All these years, Pakistan -- right from the common man to its highest officers -- has not admitted any role in Captain Kalia's murder, so with these developments we have a stronger case to pursue with Pakistan, and internationally too.

I wonder what is keeping our leaders from not pursuing this case. So long as these incidents go unnoticed and no concrete action is taken by the Indian government, such incidents like the beheading of our soldiers, violations of the Line of Control, killing our fishermen and such things will continue.

Pakistan is a notorious country and will continue indulging in these kinds of heinous crimes.

Do you believe that if India had pursued your son's case earnestly, there would not have been such incidents like the beheading and mutilation of two Indian soldiers earlier this year?

Absolutely correct. Had the government displayed its teeth in 1999 itself, Pakistan would not have dared to indulge in these kinds of heinous crimes in future.

Pakistan won't understand the language of 'Aman ki Asha', of embracing India, rather it stabs us in the back.

I am an optimist, I will continue to fight, hoping against hope till my last breath.

Again, I want to emphasise that this is not about Captain Saurabh Kalia, but about the dignity of our brave soldiers who are safeguarding every Indian's life by serving in harsh conditions ranging from minus 50 to plus 50.

This is what I can do as a humble citizen of India for those brave soldiers.

'Our pain cannot exceed that of Captain Kalia and 5 soldiers' 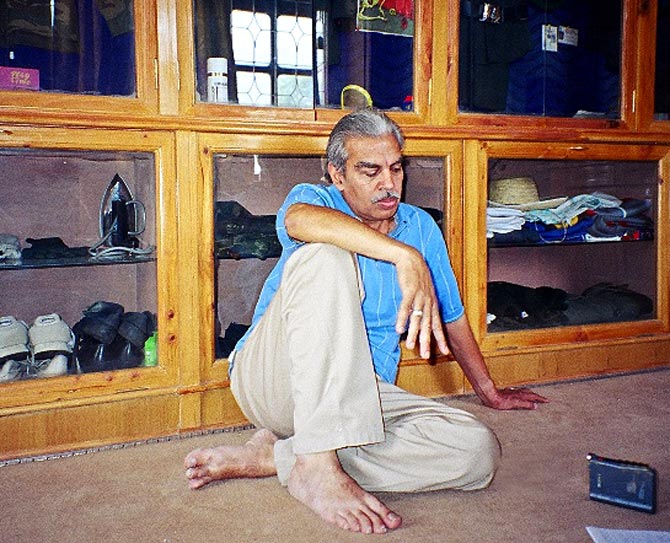 You have pursued this case for 14 years relentlessly, what drives you? What keeps you going?

It is because of the support of millions of people in India and abroad. The media has always highlighted this issue and I personally feel what Captain Saurabh Kalia and his five soldiers suffered at the hands of the Pakistan army, our pain and suffering cannot exceed that.

When I think about that, it gives me infinite inspiration and power to keep fighting.

Every Indian knows about the functioning of our bureaucracy. Babudom is prevalent everywhere. For them our brave soldiers are just numbers -- khatam bhi ho jayengey to aur a jayengey -- unfortunately that is the thought prevalent in our bureaucracy.

I don't claim to be a very learned person, but if you scan through the history of the last 60 years with Pakistan, I as a dimwitted person, I wonder what is our policy towards Pakistan?

Sometimes we offer the Most Favoured Nation status, sometimes we invite their artistes -- that nation never gives us MFN status, that nation has been exporting terror, fake currency, drugs...

You see their attitude, Pakistan's foreign policy is all about bleeding India. If India's appeasement continues, it will never help India. Rather it makes us a laughing stock at the international level.

'This issue is between nations. I cannot fight it alone' 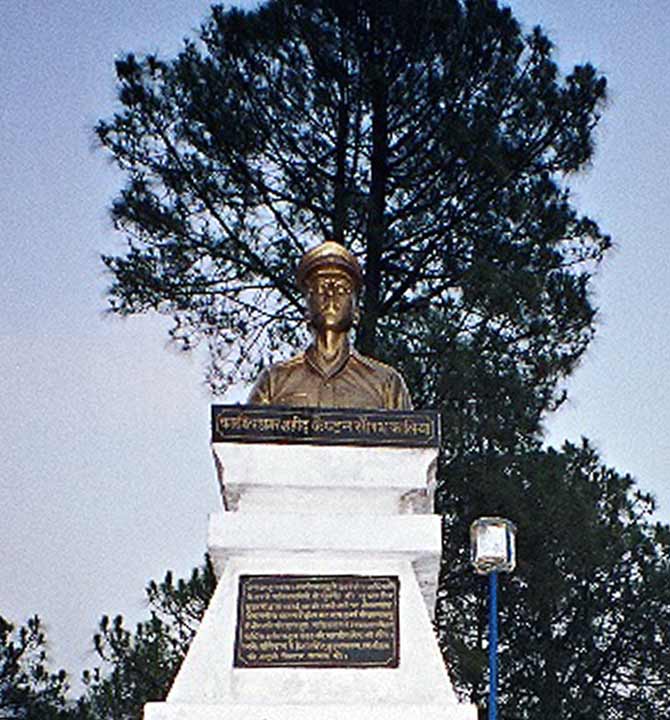 Do you think your case will get a better hearing if the BJP were to come to power?

Unless radical action is taken by whatever ruling government is there at the Centre, things will not improve.

I must clarify that this issue is between nations. I cannot fight it. Only the Prime Minister's Office or the ministry of external affairs can pursue this case. How much determination they will be having in their minds, it matters.

You will continue to fight till your last breath. You have never lost hope?

Of course. I am ever hopeful and our culture and country has an established line of thought. Satyamev Jayate -- Truth always Prevails.

After the barbaric death of your young son at the hands of the Pakistan army, would you like your grandchildren or other children in your family to join the armed forces?

Of course, in case they are physically fit as per the standards of the armed forces.

If all Indians feel like this, then who will defend the honour of our motherland?

So your last hope is the Supreme Court?

The honourable judges will see all the documents, all the developments and all the actions taken by the Indian government into account and do something that will be in favour of the dignity of the armed forces.

I want to say that this is not about Captain Saurabh Kalia and the five soldiers, it is a question about the honour of the entire armed forces.