6-year-old twins, kidnapped from school bus in MP, found dead in UP

The six-year-old twin sons of a businessman kidnapped at gunpoint in Madhya Pradesh's Satna district have been found dead in the Yamuna River in Uttar Pradesh, police said on Sunday. 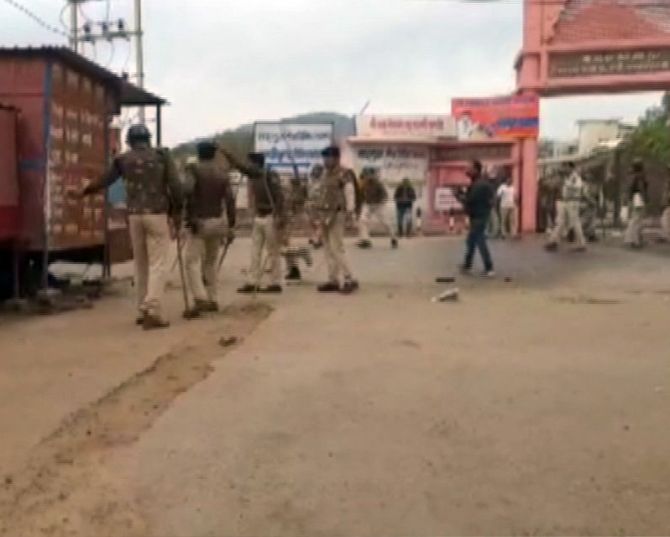 IMAGE: Violent protests erupt after the news of the children's death came in Chitrakoot . Photograph: ANI

Six persons, including the tuition teacher of the siblings and two engineering students, have been arrested for the crime, a senior police official said.

The children, both in kindergarten and sons of oil merchant Brijesh Rawat, were kidnapped at gunpoint by two masked persons from Chitrakoot when they were returning home in their school bus on February 12.

He said the bodies of the children were found floating in the Yamuna river near Baberu village in Uttar Pradesh's Banda district late Saturday night.

The bodies were later fished out from the river and sent for post-mortem to a hospital in Banda, he said.

He said the bodies of the siblings were recovered late Saturday night from the Yamuna river on the basis of information provided by the arrested kidnappers during interrogation.

The accused killed the twins on February 21 after getting a ransom amount of Rs 20 lakh a day earlier and threw the bodies in the river after tying stones to them, the IG said.

IG Shekhar said a pistol, Rs 17.67 lakh cash, three motorcycles and a sports utility vehicle have been recovered from the arrested persons.

He informed that "ram rajya" was written on the number plates of two motorcycles and the SUV had a BJP flag on it.

Shekhar said two days after the incident, the victims' father had received a Rs two crore ransom call and it was tracked to UP's Banda district.

After the call was tracked, it was found that it was made by the accused from an unknown person's phone, adding that the perpetrators used this modus operandi several times to get in touch with the victims' kin by using phones of random unsuspecting people.

He said the accused used internet telephony on February 19 to get the father to talk to his abducted twin sons. 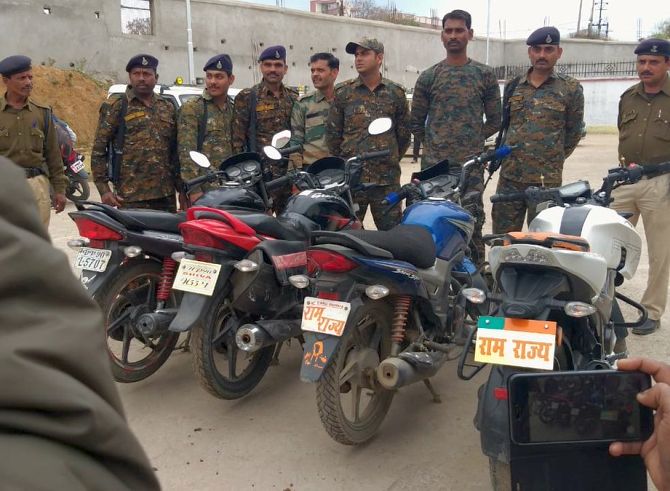 IMAGE: Vehicles used in the crime seized by the MP police. Photograph: ANI

A day later, on February 20, the victim's father paid the ransom amount of Rs 20 lakh, the IG informed.

Narrating the sequence of events that led to the arrest of the kidnappers, Shekhar said one of the persons whose phone was used by the accused to make a call had clicked a photograph of the accused's motorcycle.

Tracking down the motorcycle's registration number, police zeroed in on accused Rohit Dwivedi, a resident of Bhabhua village in UP's Banda district, he said.

Rohit led them to Raju Dwivedi, who then revealed the names of Padam Shukla, a Chitrakoot resident, and Lucky Singh Tomar, a resident of Tedura village of Banda, the official said.

Shekhar said Shukla is the sibling of a regional convener of the Bajrang Dal.

Superintendent of Police Santosh Singh Gaur said Shukla and Tomar are engineering students, while Ramkesh Yadav used to give tuitions to the twins.

Meanwhile, as the news of the children's death came in, locals forced closure of shops and business establishments in Chitrakoot town, a police official said.

Some angry locals also burnt tyres on streets and vandalised private properties at some places, he said.

After the boys were kidnapped, Madhya Pradesh police had announced a reward of Rs 50,000 for information about the twin siblings.

The police of both Madhya Pradesh and Uttar Pradesh were working on the case since Chitrakoot is a border town.

The children were residents of Ramghat in Chitrakoot Dham (Karwi) district of Uttar Pradesh. They used to travel four km across the border to their school everyday, Satna's Superintendent of Police Santosh Singh Gaur had said after the incident.

The incident gave rise to a slugfest Saturday evening, with the BJP and the Congress hitting out at each other against the backdrop of the abduction and killing.

Former MP chief minister and senior BJP leader Shivraj Singh Chouhan alleged that the law and order had deteriorated since the Congress-led government took charge in the state in December last year.

"The children were in the captivity of kidnappers for so many days. But were the Home Minister or CM concerned about this? Their attention was on transfer postings of officers," Chouhan claimed.

CM Kamal Nath hit back and said, "The criminals have been nabbed. In which car they were travelling, which flag was put up on their car, all these things are coming out. The opposition is scared because many of them are connected (to the crime)."