Six pilgrims died en route to the cave shrine of Amarnath in south Kashmir Himalayas, taking the death toll during the pilgrimage to 30 this year, officials said.

Sarju Ram (58) from Bihar and Mumbai resident Shri Sankesh (70) died of cardiac arrest at Brarimarg today, while Ugash Kumar (36) and Ramesh Veer Lal Sharma (in his 40's) -- both from Uttar Pradesh, breathed their last on Tuesday at Sangam top and the holy cave respectively, they said.

Two more devotees -- Niha Mishra (36) from UP and Jaspal Singh (55) from Rajasthan -- who had fallen ill during the yatra died at Soura Medical Institute and SMHS hospitals in Srinagar respectively, the officials said.

Over 100 pilgrims had died of natural causes during the last year's pilgrimage, prompting Shri Amarnathji Shrine Board (SASB) to make it mandatory for pilgrims to seek medical fitness certificate before embarking on the yatra.

JK Governor N N Vohra, who is also the SASB chairman, condoled the "unfortunate death" of the pilgrims.

Chairing a high level meeting to discuss the problems of the pilgrims, Vohra directed SASB Chief Executive Officer to take immediate steps for further publicising the Do's and Dont's and the health advisory issued by the Board for the yatris.

An official spokesman said all those intending to undertake the yatra were requested to take all required precautions and no person who has any medical or orthopaedic ailment, or any breathing, chest or heart problem should even think of undertaking the arduous religious voyage, which involves climbing up to nearly 14,000 feet.

"Doctors and paramedical staff along both the two routes, via Pahalgam and Baltal, have been deployed for providing emergency medicare and treatment to pilgrims," the spokesman said. 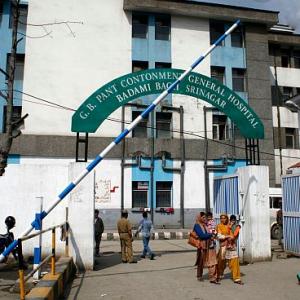