Houseboats line up desolate along the Dal Lake and Gulmarg's famed snow covered ski slopes are near empty as are hotels and the many shops selling carpets, embroidered shawls, saffron and other things Kashmiri. 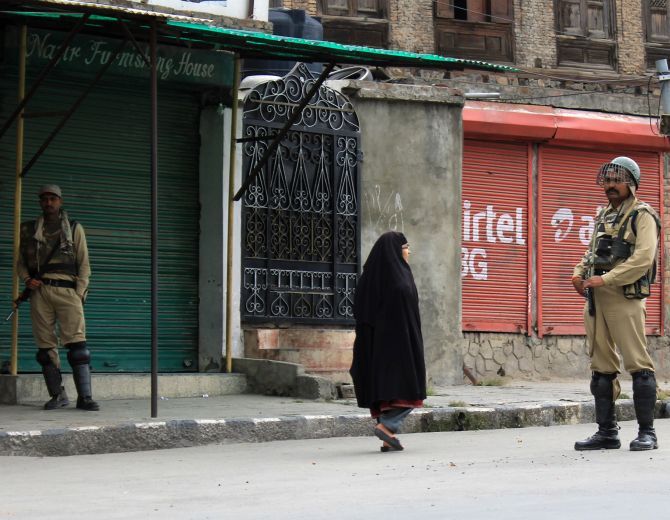 Six months after its special status was revoked, the winter chill it seems has set in deep across Kashmir.

With businesses big and small on the verge of collapse, a political vacuum and a near complete communications blackout, the future is an abyss, say Kashmiris in the Valley.

Many political detainees have been released but former chief ministers Farooq Abdullah, Omar Abdullah and Mehbooba Mufti, who were whisked into custody in the early hours of August 5, 2019, are still in preventive detention.

While the government has slapped Abdullah senior with the Public Safety Act, the other two are being held without any charges.

There are fewer paramilitary forces on the streets, dannert wires have been removed from many places and 2G mobile connectivity has been restored.

But the situation is nowhere near normal in the troubled region, long beset by militancy and now grappling with a crippling economic crisis.

There is no indication of a bailout package for the damages caused after August 5, the day the Centre announced the abrogation of Article 370 and bifurcation of the state into the union territories of Jammu and Kashmir, and Ladakh.

"We are bleeding. Name a sector of business in the Valley, it is bleeding," said Kashmir Chamber of Commerce and Industry President Sheikh Ashiq Ahmed.

The KCCI has pegged the loss from August 5 until the first week of December at nearly Rs 18,000 crore.

The situation has only become worse since.

"We have lost a big working season. There are some businesses where the losses are irrecoverable like IT, tourism, be it hotels, houseboats and restaurants," Ahmed said.

More than 50,000 weavers employed in the silk carpet industry are jobless with manufactures/exporters not getting any orders from Europe and America due to the internet gag, he added.

Hotelier Asif Iqbal Burza said the 'tourism sector is on ventilator and the lack of oxygen supply is affecting its vital parameters'.

"We haven't been able to change the perception about the Valley and make it attractive enough for tourists to visit. Even a winter destination like Gulmarg has far less occupancy," he said.

He added that stakeholders in the tourism sector are barely making ends meet.

He suggested that the tourism industry needs 'serious hand holding and bailout packages to survive the hardest time that this sector has ever gone through'.

Among those struggling is Nighat Shah, who took a loan in 2016 to start a travel agency.

"When I took a loan in 2016 for setting up the business, I was sure I would be able to repay the entire amount before my tenure of five years. However, the August 2 notification of last year asking 'yatris' and tourists to leave the state immediately left us in a lurch.

"I somehow felt the notification was a precursor to doomsday for tourism in the Valley and, given the situation at present, I don't think I am wrong," Nighat, who is selling office furniture and other equipment to repay the next bank instalment, said.

Ayaz Khan, who invested in a fleet of cars and tourist buses, faces a similar problem.

He can now be seen cleaning his vehicles everyday.

"What else should I be doing? Tourists are nowhere to be seen. The government is not looking at our problems sincerely and banks are knocking at our door. Now I am planning to sell off the vehicles to at least return some money to the banks," Ayaz said.

The KCCI, in a report submitted to the Central government, has said the present disruption has resulted in lakhs of people losing their jobs.

Borrowers of financial institutional have lost their capacity to fulfil their commitments, a substantial number of accounts are likely to turn bankrupt and many business establishments have closed down or are contemplating closure, it said.

Sectors directly dependent on the internet like IT and e-commerce have been ruined, the report said.

It further said the government intervention in the horticulture sector to earmark Rs 8,000 crore for the purchase of apples has caused price turmoil and panic sales.

Fruit crops have suffered heavy losses with trees suffering permanent damage due to the unavailability of weather updates about heavy snowfall.

The replacement of trees will take years and crop losses for this period needs to be separately accounted for.

Senior officials, speaking on the condition of anonymity, said they are aware of the problems and that peace is being purchased on daily basis.

For all crucial decisions and future plans, the bureaucracy is looking at the power corridors in New Delhi, they said.

Driving past busy roads in Srinagar with the odd traffic jam, often referred by the government as a sign of normalcy, it certainly seems that Kashmir may well be on the road to normalcy.

But scratch the surface and the worries become evident.

As locals huddle together in tea shops and street corners, the questions are many -- 'What is in store?' 'How are we going to cope?' 'Will tourists return to the Valley this year?'

Sumir Kaul in Srinagar
© Copyright 2020 PTI. All rights reserved. Republication or redistribution of PTI content, including by framing or similar means, is expressly prohibited without the prior written consent.