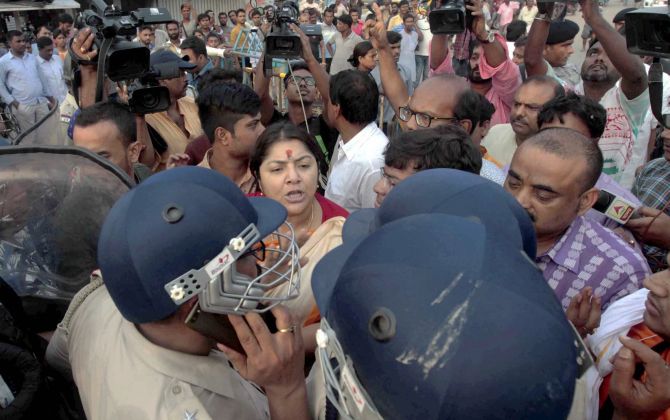 IMAGE: BJP MP Locket Chatterjee in an argument with the police personnel who stopped a BJP team from taking the bodies of two of the party workers to Kolkata, at Minakhan in North 24 Parganas, on Sunday. The BJP workers were allegedly killed in a scuffle with TMC members. Photograph: PTI Photo

Stating that there were a few 'stray post-poll clashes' in West Bengal, the Mamata Banerjee government on Sunday claimed that situation in the state was 'under control' in a letter to the Centre, which had issued an advisory after four people died in violence between workers of the Trinamool Congress and the Bharatiya Janata Party.

State Chief Secretary Malay Kumar De wrote that 'firm and appropriate actions' were initiated in all cases of violence without any delay.

'There have been a few stray post-poll clashes in the state perpetrated by some anti-social elements, the law enforcement authorities have been taking firm and appropriate actions in all such cases without any delay,' De wrote in the letter to the Union Home Ministry.

'In the instant case under Nazat Police Station in North 24 Parganas district too, police case has been registered and investigation has been initiated, even while the maintenance of peace in the area has kept the police contingents busy on the roads and in the neighbourhood,' the letter read.

'There has been no delinquency in discharge of functions by public officials yet, strict vigil has been kept on the evolved affairs,' it added.

The chief secretary said the situation is under control and it may not be construed under any circumstance to be a failure on the part of the law enforcement machinery of the state to maintain the rule of law and impure confidence among the people.

Earlier in the day, the Centre expressed 'deep concern' over continuing violence in the state, saying the 'unabated violence' even after the Lok Sabha polls appears to be a failure on part of the state government.

In the advisory, the home ministry asked the state government to maintain law and order, peace and public tranquillity.

'The unabated violence over the past weeks appears to be a failure on the part of the law enforcement machinery of the state to maintain the rule of law and inspire confidence among people,' the advisory said.

Trinamool Congress secretary general Partha Chatterjee described the Centre sending the advisory as a conspiracy against the state government.

"West Bengal is the most peaceful state in the country and there has been no incident of any political bloodshed here. And you are floating a conspiracy theory by sending us this advisory note," Chatterjee told reporters.

Chatterjee questioned why there was no advisory note sent to the Uttar Pradesh government when incidents of violence were reported from there.

"You are using the home ministry in an undemocratic manner to issue this advisory to the state government. This is nothing but a political conspiracy," he said.