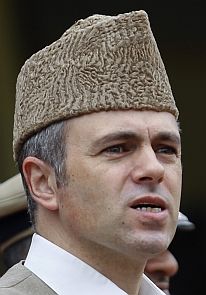 Jammu and Kashmir Chief Minister Omar Abdullah on Tuesday said that the situation in the state was not conducive for holding assembly elections in light of the recent floods.

Talking to reporters after a meeting with Union Home Minister Rajnath Singh, Omar said while the state government has the capability to hold the elections, a distinction should be made whether it is the opportune time.

He, however, made it clear that it was the Election Commission that would take a final call.

"The National Conference has made it very clear that we feel this is not the opportune time to hold elections. We believe that at this point of time people are struggling to rebuild their lives," he said.

The chief minister said the recent floods had not hit some sparsely populated rural areas but some of the most heavily populated areas of Kashmir Valley.

"The capital city anyway had less than optimum turnout in elections. If and when Srinagar witnesses a zero percentage turnout, who will you blame for that? You certainly cannot blame me. Because I am not the one who is pushing for elections. You have to blame those people who are trying to hold elections," he said.

Omar said by holding elections at this point of time, more misery will be brought upon people and hence the National Conference made it clear its stand to the Election Commission even though the party was in a minority in that meeting.

Omar said the flag meetings between the forces of India and Pakistan were important as tension could be reduced through talks in such meetings so that a ceasefire comes into force.

But security forces have to retaliate if there is fire from across the border as they were targeting civilian areas, he said.

“The state government wants the ceasefire to be maintained,” he added.

Asked about the hoisting of a flag of terrorist organisation ISIS in Kashmir Valley, the chief minister said it was the job of "some idiots" but unfortunately a section of the media was trying to highlight the incident.

He said a case has been registered, the suspects have been identified and some arrests also have been made.