In the backdrop of the Chinese navy's rapid expansion and its frequent forays into the Indian Ocean, Chief of Naval Staff Admiral Radhakrishnan Hari Kumar said on Friday that his force is fully capable of confronting any security threat and fully backed the ambitious tri-services reforms that included setting up of a maritime theatre command. 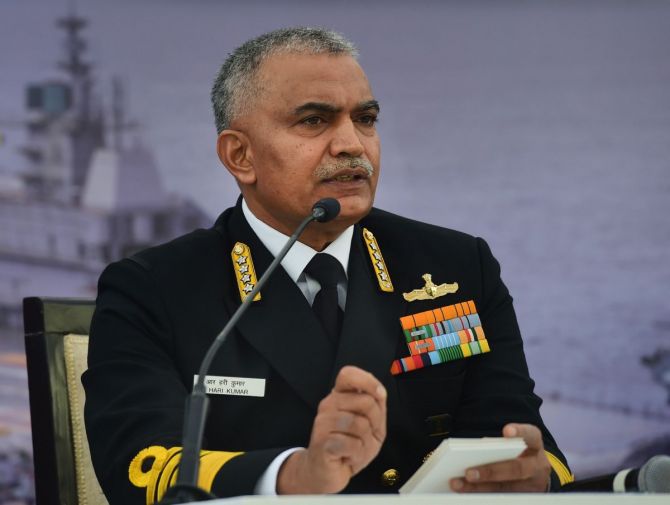 Addressing a press conference on the eve of Navy Day, the admiral said the situation along India's northern border has added to the security complexities at a time the country was reeling under COVID-19 and that the 'dual' scenario continues.

"In these testing times, the Indian Navy aims to stand steadfast in furthering our national and maritime interests. Our focus on maintaining combat and mission readiness resulted in deterring any misadventure in the maritime domain," he said without elaborating.

On the Chinese navy's growing combat capability and presence in the Indian Ocean, the newly-appointed CNS said the ongoing developments and deployments in the region are factored into the Indian Navy's capability development plans and preparedness.

"We are aware of the developments of the Chinese navy. They have built 138 ships in the last 10 years. Every nation is entitled to have its own capability development. We keep an eye on all developments in our area," he said.

Admiral Kumar said China's People Liberation Army (Navy) has been present in the Indian Ocean Region since 2008 and the Indian Navy has been watching it.

"It is not just the numbers that matter. It is also about people, how you employ the weapons that you have, your strategy and your operational plans etc. There are a whole lot of issues," he said.

"I want to assure you that the Indian Navy is a well-balanced force and is confident of defending India's maritime interests for sure," he added.

Referring to the theaterisation plan of the armed forces, he said the details on setting up of the maritime theatre command are being worked out and they may be finalised by the middle of next year.

"I would like to reiterate the navy's wholehearted support for reforms in the higher defence organisation and on enhancing tri-services synergy," he said.

"We are looking at the establishment of the maritime theatre command in the near future which would further buttress joint planning and joint application of force in the maritime domain. The details are being worked out and maybe finalised by the middle of next year," the CNS said.

As per the plan, each of the theatre commands will have units of the Indian Army, the Indian Navy and the Indian Air Force and all of them will work as a single entity looking after security challenges in a specified geographical territory under an operational commander.

At present, the army, navy and the air force have separate commands.

Initially, a plan was firmed up for the creation of an Air Defence Command and Maritime Theatre Command.

Admiral Kumar said it will take time to implement the theaterisation plan.

The CNS said operational powers are set to be vested with the theatre commander.

"It may happen in six months, it may take a little longer. The timeframe will depend on how we address the complexities involved," he said.

Despite the complex security situation in the region and the adverse impact of COVID-19, Admiral Kumar said the Indian Navy, as a cohesive team, maintained the operational tempo and ensured the security of the country.

Admiral Kumar also said that women officers have been appointed on board major warships of the Indian Navy.

Separately, officials said around 28 women officers have been deployed so far in 15 major warships of the Indian Navy and the number is going to go up soon.

"In consonance with the Government of India's objective to empower women, we have taken measures towards providing additional opportunities for women officers in the navy. Women officers have been appointed on board almost all major warships," the CNS said.

He said the modalities for downstream training of women as cadet entry at National Defence Academy are being worked out.

"The navy is fully prepared in all aspects to induct and absorb women across the wide spectrum of roles and responsibilities," he added.

On the overall maritime scenario, Admiral Kumar said the navy will remain at the forefront of cooperative engagement to ensure a free, open, inclusive and rules-based approach to regional maritime security.

"Our mission-based deployment philosophy has enhanced the Indian Navy's presence across the region enabling rapid responses to emerging security challenges," he said.

"The navy has established a persistent footprint in our areas of interests," the admiral said. "The naval deployment also serves as a deterrent to inimical interests clearly signalling the navy's reach, capability and intent."