Defence Minister Nirmala Sitharaman on Friday visited a production facility of French aerospace major Dassault Aviation near Paris where the Rafale jets to be supplied to India are being manufactured, official sources said.

They said during her visit to the plant in Argenteuil, Sitharaman spoke to officials of the Dassault Aviation, the makers of Rafale, and took stock of progress in production of the fighter jets whose delivery to India will begin in September next year.

Sitharaman arrived in Paris on Thursday on a three-day visit in the midst of a massive controversy over the procurement of 36 Rafale jets under a Rs 58,000 crore government-to-government deal between India and France.

On Thursday evening, Sitharaman held wide-ranging talks with her French counterpart Florence Parly on ways to deepen the strategic and defence cooperation between the two countries.

The talks were held under the framework of the annual Indo-French defence ministerial dialogue which was agreed to during the summit meeting between Prime Minister Narendra Modi and French President Emmanuel Macron in March. 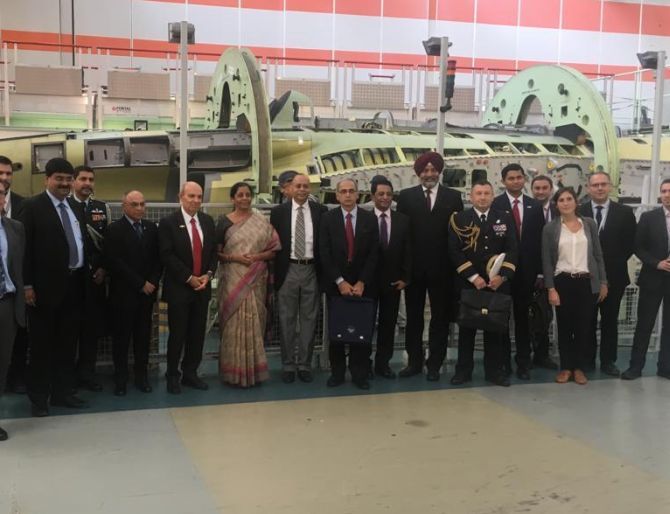 IMAGE: Sitharaman arrived in Paris on Thursday on a three-day visit in the midst of a massive controversy over the procurement of 36 Rafale jets under a Rs 58,000 crore government-to-government deal between India and France.

They said both the sides deliberated on co-production of military platforms and weapons by the two countries besides expanding cooperation between their armed forces, particularly in the maritime domain.

It was not immediately known whether the Rafale deal figured in the talks.

Sitharaman's visit to France came in the backdrop of a fierce political backlash between the ruling BJP and Congress over the procurement of the jets.

In a report on Wednesday, French publication Mediapart said Dassault Aviation, the manufacturer of Rafale, had to choose Ambani's firm Reliance Defence as its offsets partner in India as a trade-off for getting the deal.

When asked about the allegations, Sitharaman said that offset obligations for the deal are mandatory but not the names of the companies.

In a statement, Dassault Aviation said it has 'freely chosen to make a partnership with Reliance Group, as it rejected the report by French publication Mediapart'.

The latest report followed former French president Francois Hollande's comments last month that France was given 'no choice' on selection of the Indian partner for Dassault and the Indian government proposed the name of the Indian company.

Hollande was the French president when the Rafale deal was sealed. 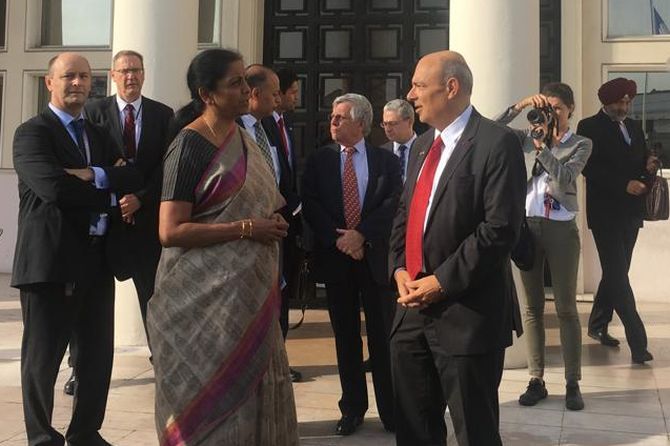 IMAGE: during her visit to the plant in Argenteuil, Sitharaman spoke to officials of the Dassault Aviation, the makers of Rafale, and took stock of progress in production of the fighter jets.

The Congress has been alleging massive irregularities in the deal, saying the government was procuring each aircraft at a cost of over Rs 1,670 crore as against Rs 526 crore finalised by the United Progressive Alliance government when it was negotiating the deal.

The Congress has also been targeting the government over selection of Reliance Defence as an offset partner for Dassault.

The government has vehemently rejected the allegations and asserted that it did not have any role in the selection of Reliance Defence.

'Rahul a serial liar and manufacturer of fake news'

Facing relentless attack from Rahul Gandhi on the Rafale deal, the Bharatiya Janata Party on Friday alleged the Congress president was a 'serial liar' and 'manufacturer of fake news' and his repeated lies cannot substitute the truth of the deal.

Asserting that the people of India trusted Narendra Modi, Goyal also rejected the suggestion that the Congress has used the issue of alleged corruption in the Rafale deal to create a perception against the prime minister.

Goyal said an 'issue-less' party and its leadership bereft of truth are no substitute to Modi and his good governance.

The Union minister was fielded by the BJP to reject Congress's charges on the Rafale deal, a day after the Dassault CEO said his firm's joint venture with Anil Ambani's Reliance Group represented only around 10 per cent of the offset investments under the Rafale jet deal and it was in partnership talks with 100 other companies.

Gandhi has been accusing the prime minister of forcing Dassault to select Reliance as an offset partner to help the Indian firm 'pocket' Rs 30000 crore -- the entire estimated offset amount.

Targeting the Congress leader, Goyal said people have been of late seeing activities of a 'serial liar', with an 'issue-less' party thinking that it can repeat lie after lie to make it sound like truth.

The minister said it has become clear now that Gandhi has been beating a dead horse and manufacturing fake news.

Goyal said the government has maintained highest standards of transparency and integrity in the deal to buy 36 fighter aircraft from Rafale and it expeditiously purchased the aircraft due to reasons of national security and negotiated a better term than what the United Progressive Alliance dispensation had managed.

The Dassault CEO has categorically confirmed that offset was an obligation for his company and it selected its partners of its 'volition and choice'.

He also reiterated the BJP's charge that the Congress had cancelled the deal with Dassault when it was in power because the French firm did not agree to give benefits to a defence dealer linked to Robert Vadra, Gandhi's brother-in-law.

Gandhi's attacks on the Modi government are an attempt to deflect attention from this, Goyal said.

"His repeated lies and falsehood after falsehood will not change reality," Goyal said, referring to Congress president's charges relating to comments attributed to former French president Fracois Hollande and those of France's current president Emmanuel Macron.

The Congress on Friday hit back at the BJP over its 'serial liar' barb at Gandhi, saying it should give factual answers to questions asked about the Rafale deal and then the country will decide who is lying and who is not.

"The country needs factual answers, we don't need your adjectives for Rahul Gandhi. The country will decide who is lying and who is not lying," Khera said.

"The entire government looks like a villain today," he said.

He reiterated the Congress's demand for a joint parliamentary committee.

He also took a swipe at the BJP for fielding different ministers to defend the Rafale deal, saying when the Congress raised questions on Goyal, Defence Minister Nirmala Sitharaman came to protect him, when question marks were put on Sitharaman's ministry, then the agriculture minister defended it.

"Today, railway minister himself appeared. Unable to keep his ministry on track, he is talking about the Ministry of Defence," Khera said.