Five policemen, including an Station House Officer, have been suspended for alleged negligence, five days after the mutilated body of a toddler was found in a garbage dump in Aligarh in Uttar Pradesh, triggering a public outrage over the brutality of the crime. 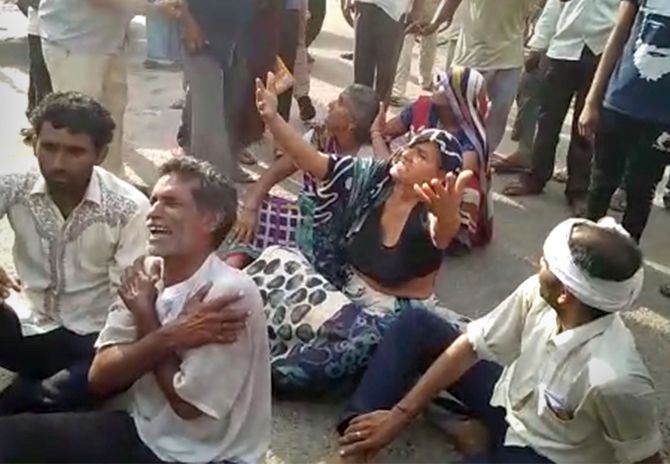 The policemen were suspended for alleged delay in registering the case after the girl was reported missing, and also for delaying the probe which eventually led to the discovery of her body on June 2, officials said.

The two-and-a-half-year-old had gone missing from Tappal township on May 30.

Her body was found three days later in a garbage dump near her house.

The post-mortem examination confirmed death due to strangulation.

It has not found any sign of sexual assault but this cannot be ruled out at this stage.

Replying to questions from reporters in Lucknow, ADG (Law and Order) Anand Kumar said, "The case will be fast tracked. POCSO will also be included in the FIR. As of now sexual assault is not ruled out."

He said vaginal swabs have been sent for forensic examination.

Aligarh Senior Superintendent of Police Akash Kulhari too said vaginal swab and slides have been sent to a forensic science laboratory.

The SSP said a decision on adding the Protection of Children from Sexual Offences Act will be taken after the report comes.

ADG Kumar said the body was sent for postmortem examination more than 72 hours after the death.

"Entry of maggots have also been found," he added.

Tappal police station officials registered the case on May 31, a day after she had gone missing.

Two suspects have been arrested and police say the case is a fallout of a monetary dispute.

The accused -- Zahid and Aslam -- have confessed to killing the girl after her father failed to return Rs 10,000 he had borrowed from them, police said in a statement.

Asked about the suspension of police officials, SSP Kulhari said that it was done on Thursday on the basis of the inquiry conducted by circle officer Pankaj Srivastva.

The girl's father, Banwarilal Sharma, had threatened to go on fast unto death, demanding the arrest of the accused's family members who, he said, "colluded" in the crime.

The SSP met him and persuaded him against sitting on fast.

The SSP said he has assured Sharma that justice would be done in the case and the accused would be tried in a fast-track court.

Proceedings have begun to charge the duo under the National Security Act, Kulhari has said.

A six-member Special Investigation Team has been formed to investigate the case and a female inspector had been appointed to carry forward the probe, he said. 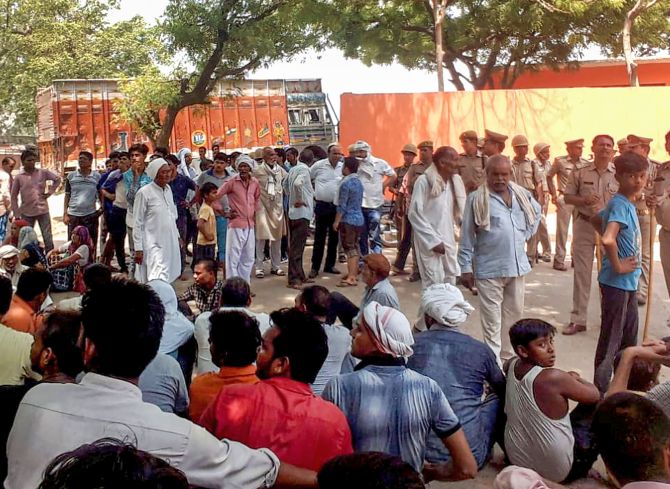 IMAGE: Villagers sit on dharna outside the police station after the death of a 3-year-old girl in Aligarh. Photograph: PTI Photo

The minor's brutal killing soon took a political colour with Congress president Rahul Gandhi expressing shock over the incident and wondering as to how any human being can treat a child so brutally.

"The horrific murder of a little girl in Aligarh, UP has shocked and disturbed me. How can any human being treat a child with such brutality? This terrible crime must not go unpunished. The UP police must act swiftly to bring the killers to justice," he said on Twitter.

"The brutal murder in Aligarh is yet another inhuman, unspeakable crime against an innocent child. I cannot even begin to imagine the pain her parents must feel. What has become of us," she asked.

"The Uttar Pradesh government should take strict action immediately to establish the rule of law in the state and put the guilty behind the bars," she said in a statement in Lucknow.

Celebrities too expressed their shock and disgust.

Actor Akshay Kumar said he was "horrified, upset and angry".

"This is definitely not the kind of world we want for our children. We need immediate and strictest punishment for such a heinous crime," he said on Twitter.

"How can somebody even think of doing such a thing?!?! Speechless.," Abhishek Bachchan said on the social media.

The National Commission for Protection of Child Rights said in New Delhi it has sought a report from the SSP and issue directions on examining the report.

Security measures at Tappal township, 50 km from the district headquarters, have been tightened as a precautionary step after tension mounted in the area. The SSP had visited the area and urged residents to maintain public order, so that police can probe the case.