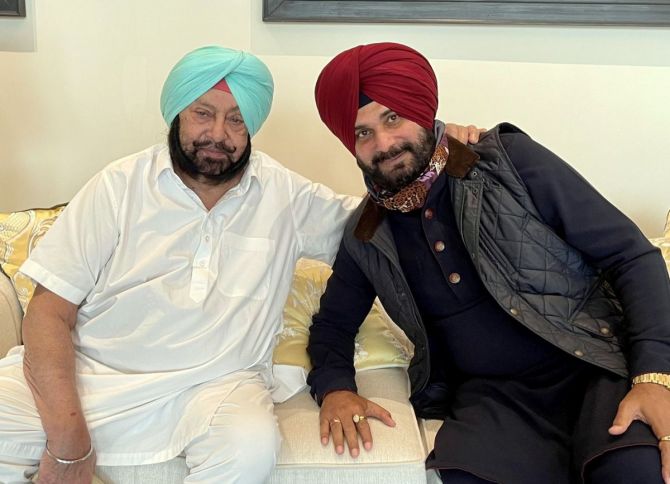 Kaur, who is Amarinder Singh's wife, asked those who have raised a banner of revolt against the chief minister to refrain from raking up such issues as it was "damaging" the party ahead of the 2022 assembly elections.

She praised the chief minister for leading the party to "many victories" and taking Punjab on a "road to progress".

Four ministers and several party legislators have gone against Amarinder Singh and sought his replacement, saying they have "lost faith in him" over the issue of unfulfilled promises.

Talking to the media in Chandigarh, Kaur asked the leaders to play a positive role to bring the party back to power in the upcoming elections.

To a question why some party leaders were raising voices against the chief minister all of a sudden, she said, "For four-and-half-years, it was ok. But now it is for the (party) high command to take note and see what is actually going on on the ground and do what is best for the party."

When asked whether she holds Punjab Pradesh Congress Committee chief Sidhu responsible for the current situation, she replied, "Of course he is. He is the one who started (with) his advisers."

"Once the decision had been taken by the high command (that) Sidhu was coming, the CM said yes, it is the Congress president's decision, I (CM) abide by it."

"They (disgruntled leaders) should also fall into line. This is not the time to rake up all things. You raked them up at the party platform. We want a united Congress to fight the elections," she said.

Asked if those leaders who are unhappy with the chief minister want his replecement, Kaur said, “That is not up to them. It is up to the (party) high command.”

She said Amarinder Singh has done “his best” as a party leader.

“He has led the party to many victories. He has done whatever the high command asked. He fought against (Arun) Jaitley and won (from Amritsar seat),” Kaur said.

“He (CM) has done good work for Punjab in spite of the COVID-19 pandemic and monetary concerns. He took Punjab on a road to progress in every constituency,” she added.

To a question on remarks of Sidhu's two advisers, Kaur said, “I do not know from where these advisers came.”

She said the Punjab Congress chief should choose such people from within the party.

Sidhu is facing fire over controversial remarks by his two advisors -- Malvinder Singh Mali and Pyare Lal Garg -- on Pakistan and Kashmir.