Siddharth Chatterjee takes over as top UN diplomat in China

Senior United Nations official Siddharth Chatterjee of India has formally taken over as the United Nations Resident Coordinator in China, a key posting of overseeing the work of 27 agencies, funds and programmes of the global organisation in the world's most populous country. 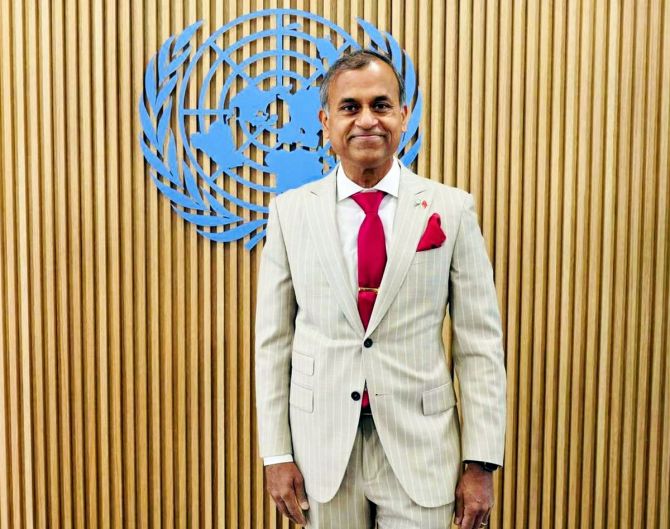 He will be UN Secretary-General Antonio Guterres's senior-most UN Representative in China as the UN Resident Coordinator.

Chatterjee, whose early career was in the Indian Army, was decorated for gallantry by the President of India in 1995.

He holds a master's degree in public policy from Princeton University in the United States, and a bachelor's degree from the National Defence Academy in India.

Commenting on his new assignment, Chatterjee said, "Over the past four decades, the world has witnessed the profound economic and social transformations that have taken place in China, lifting hundreds of millions out of poverty."

"As the UN Resident Coordinator to China, I look forward to leading the UN Country Team to work with the government to preserve this hard-won progress China has made as well as share China's vast experience to solve global development challenges and accelerate the drive to achieve the Sustainable Development Goals.

Chatterjee has spent over 24 years in the United Nations serving in a wide range of positions and organisations.

A TEDx speaker, he is a regular opinion contributor on humanitarian and development issues for a range of local, regional and international media outlets and journals, the UN said in a statement at the time of his appointment.

Before coming to China, Chatterjee was the UN Resident Coordinator in Kenya where Kenya's Minister for Sports Culture and Heritage Amina Mohammed said that Chatterjee's exemplary leadership leaves a lasting footprint in the execution of Government/UN collaboration impacting millions of lives in Kenya and the region.

"We presented the gift of a giant footprint as a reminder of the unforgettable journey that he has walked with the people of Kenya," she said in a farewell tweet.

The highlight of his career was the demobilisation of 3,551 child soldiers in South Sudan when he served with UNICEF during the height of a conflict in 2000.

Observers say by confirming Chatterjee's appointment, particularly at a time of border tensions with India as well as commencement of India's two-year term as a non-permanent member in the UN Security Council, Beijing may be indicating its intent to dial down friction with New Delhi and strengthen multilateral cooperation.