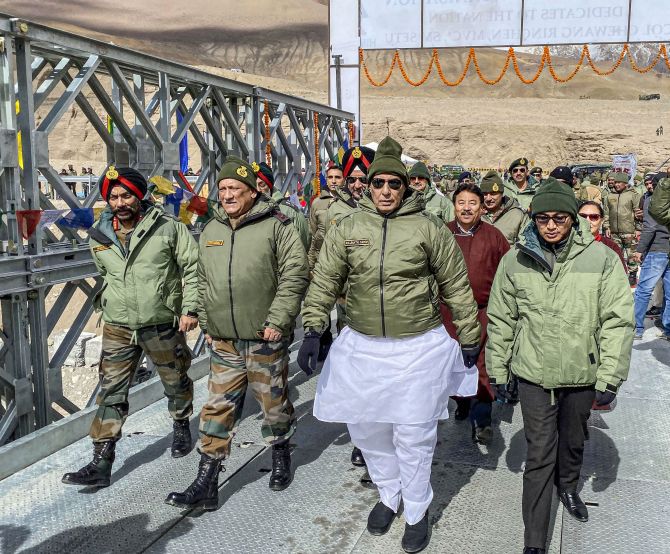 Government on Monday announced that Siachen area, the world's highest battlefield, is now open to tourists.

Defence Minister Rajnath Singh said the government has decided to open the entire area from Siachen base camp to Kumar Post for tourism purposes.

The step has been taken to boost tourism in Ladakh and give people a window to appreciate the tough work done by Army jawans and engineers in extreme weather and inhospitable terrains, he said.

Singh was addressing a function in eastern Ladakh to inaugurate Col Chewang Rinchin Bridge on Shyok River, located about 45 km from the county's border with China.

"The Ladakh MP in his address, mentioned about opening this area to tourism. And, I am happy to share that the government has decided to open a route from Siachen Base Camp to Kumar Post for tourists," the minister said.

"This step will make them appreciate the efforts put in by jawans, engineers and other workers," he said.

Singh later tweeted, 'The Siachen area is now open for tourists and Tourism. From Siachen Base to Kumar Post, the entire area has been opened for Tourism purposes.'

The Siachen Glacier at the height of around 20,000 ft in the Karakoram range is known as the highest militarised zone in the world where the soldiers have to battle frostbite and high winds

At the bridge inauguration, Singh said only steel and concrete have not gone into its making, but 'sweat and valour' of the engineers and workers of the Border Roads Organisation (BRO) too.

They have toiled hard and people should know their stories, Singh said.

The 1400-ft long bridge is the highest altitude permanent bridge that will connect Durbuk and Daulat Beg Oldi and reduce travel time by about half.

The Indian Army had moved a proposal for opening up Siachen to tourists with a focus to showcase the working conditions of troops serving in the sector, and the government gave its nod, according to sources.

According to official figures, the Army lost 163 personnel at the world's highest battlefield during the last 10 years. India and Pakistan started deploying troops at the strategically key glacier in 1984 and mountaineering expeditions were allowed till then.

The Glacier came under the strategic control of India in 1984 following 'Operation Meghdoot'.

Former northern command chief Lt Gen B S Jaswal (retd), however, feels that environmental issues will be a matter of concern.

"Tourism and other activities will see a surge in waste dumping. This will hasten glacier retreat. Due to the presence of the Army, a lot of non-biodegradable waste is already present there and every day, about 1,000 kg is being added," Lt Gen Jaswal said.

He said that while opportunities will open up the doors for revenue generation for locals as also the government, keeping the security in view, red lines will have to be drawn to restrict areas for visits.

This being a very sensitive area, security issues, especially concerning foreigners, will have to be factored in, he added.

At the same time, the former army commander said, it will also motivate the youngsters to join the Army.

"They will learn that the forces can operate and sustain in extreme climate and very hostile terrain.... It will be a capability demonstration to our countrymen," he added.

Indian Army has given a befitting reply to Pakistan on attempts to infiltrate and such actions will continue if they don't stop infiltration, Singh said.

In his address, he also asserted that after abrogation of sections of Article 370 and Article 35A, the Ladakh region will now only 'draw friends' and 'leave no scope for enemies'.

"However, our neighbour Pakistan... Our armed forces have never been offensive on the Pakistani side. We have never done the first firing," Singh said.

"But, by supporting terror activities attempts have been made from the other side to destabilise, weaken and compromise the integrity of India," he said.

And, Indian armed forces have given a 'befitting reply' to them, he said.

His statement comes a day after Army chief General Bipin Rawat said that three terror camps have been destroyed by Indian Army in retaliation to unprovoked ceasefire violation from the Pakistani side at Tangadhar sector of Jammu and Kashmir.

Singh said, "If they do not stop infiltration, our armed forces will keep giving befitting replies until they (Pakistan) stop such activities."

Singh said India and China share 'cordial relations' and there are 'perceptional differences' between the two countries on the boundary issue, but it has been handled with great maturity by both sides.

The road 'goes to the border with China. Now, India and China have good relations... Recently even the Chinese President (Xi Jinping) held a long meeting with our prime minister at Mahabalipuram, but he did not mention the Kashmir issue as China feels it's an internal issue', Singh said.

China's recent statement to all nations to combat terrorism in a concerted effort has also been welcomed, the defence minister said.

The bridge is about 45 km from the India-China border.

Later, Singh also tweeted, 'India shares cordial relations with China. There are perceptional differences between both the countries on the boundary issue but the issue has been handled with great maturity and responsibly.'

'Both the countries have not allowed the situation to escalate or go out of hand,' he said.

In his address, Singh said there are 'perceptional differences between the two countries on the border issue, but defence forces of both the countries are discharging their responsibilities very sensibly'.

Kunal Dutt and Anil Bhatt
© Copyright 2020 PTI. All rights reserved. Republication or redistribution of PTI content, including by framing or similar means, is expressly prohibited without the prior written consent.