Shutting door on MPs insult to Kashmiriyat: Mehbooba to separatists 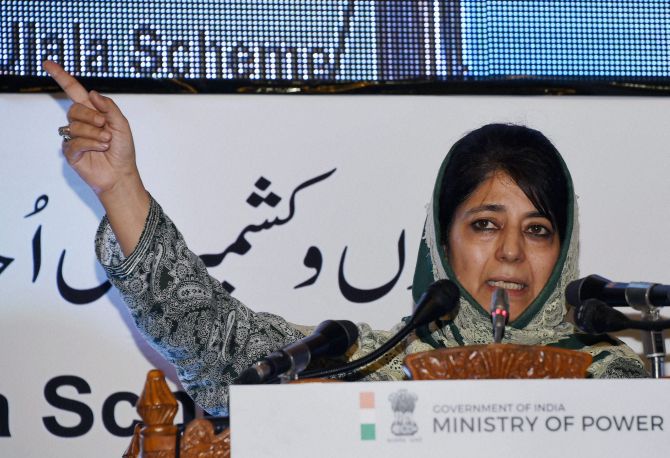 Jammu and Kashmir Chief Minister Mehbooba Mufti hit out at the separatists on Tuesday for ‘spoiling’ the youth of the Kashmir Valley and termed as an ‘insult’ to Kashmiriyat their action of shutting the door on members of the all-party delegation of members of Parliament that explored ways to restore peace in the troubled state.

By spurning talks, she said, the separatist leaders were not facilitating resolution of the problem but stalling the process for finding lasting peace.

“We have lost several opportunities in the past to resolve the issue through engagement and dialogue and today again if we miss the chance, the coming generations will never forgive us for our intransigence,” the chief minister told the gathering at a function for formal launch of UJALA scheme in Kashmir under which LED bulbs will be supplied.

The event was organised by Union Power Ministry, the state’s Power Development Department and Energy Efficiency Services Limited -- a joint-venture of Public Sector Units under the Ministry of Power.

Nobody wants violence except for those who face no impact of this violence as their own children are studying outside the Valley. They ask the children to fight bullets, pellets and teargas but themselves fear a policeman

Referring to the separatists’ decision to not talk to the visiting all-party delegation, Mehbooba said it was ‘an insult to Kashmiriyat, to us’.

She said an opportunity has presented itself for addressing the Kashmir issue as the country has a strong Prime Minister in Narendra Modi who has called for an end to the violence.

“Today, there is an opportunity as there is a very strong prime minister in this country. Today, in this situation, the cream of the country, members of the Parliament, came to you (as part of all-party delegation) and many among them said that they want to talk without any conditions,” she said.

Mehbooba said the prime minister went to Pakistan, then Pathankot happened, the (Union) home minister (Rajnath Singh) went there in bad times, but he was given the same treatment which was meted out to the visiting MPs who had come to our door.

“It does not insult our guests, it insults us because it shows our moral standards,” she said, adding her government would continue its endeavour for peace.

“It has not happened till now that a sitting chief minister, as president of the party, writes a letter and requests (for talks) this way but I did it because there is pain within. As I travelled to most of the places in the Valley, children were out on roads with stones in their hands instead of going to schools or colleges.

“Why? Is it their doing? It is the doing of the (separatists) leaders,” she said.

She wondered how the separatists could roam from one home to another asking children and young people to come out when their own were studying abroad or outside the state.

“My colleagues have this (fear) that I may say something. But, I have always spoken truth. The way a mother slaps her child when he tries to touch a hot kangri (firepot), I will do the same to save my people. I will be angry, I will speak truth and warn them not to use children as a shield,” an emotional Mehbooba said.

Mehbooba exuded confidence that the Valley will come out of the current ‘misery’ as her intentions were noble.

Instead of pushing our youth on the streets, we should ask them to join their schools and ourselves come to the forefront for resolution of the issues through political and democratic means

"Majority of the people want an honourable solution to the issue. Nobody wants violence except for those who face no impact of this violence as their own children are studying outside the Valley.

"They ask the children to fight bullets, pellets and teargas but themselves fear a policeman," she said.

She said her party has been consistently advocating dialogue, both with Pakistan and all sections of the society within the state, including the separatists, for a permanent resolution of the Kashmir issue.

Whether it was the party’s Common Minimum Programme with Congress in 2002, its Election Manifestos or its ‘Agenda of Alliance’ with the Bharatiya Janata Party, People’s Democratic Party has repeatedly reiterated its agenda of peaceful resolution of the issue through engagement and reconciliation, she said.

“And to a large extent we had succeeded in facilitating setting off a productive reconciliation and resolution process in and around the state between 2002 and 2005,” she said, and added that today again the party’s position is the same and it was in this spirit that she wrote to the separatist leaders requesting them to engage in talks.

Stressing on the need for continuing the efforts for peaceful resolution of the issue, the chief minister called for reaching out to people through substantive political and economic measures to address the ‘anger, alienation and the aspirations’.

She also urged the separatist leadership to engage in negotiations to make peace a reality in the state and bring an end to the miseries of the people.

“Despite the challenges and impediments, the prevailing painful situation in Kashmir necessitates once again reaching out to all shades of political opinion in the state and initiating substantive political and economic measures to revive and consolidate the peace and resolution process,” she said.

“Instead of pushing our youth on the streets, we should ask them to join their schools and ourselves come to the forefront for resolution of the issues through political and democratic means,” she said.

Mehbooba said the people have been suffering the ‘disastrous consequences’ of the turmoil and they have to be retrieved from this quagmire, sooner the better and ‘the onus lies not only on us but the separatist leadership as well to give the peace and resolution process a chance’.

“Our children are getting killed or maimed, our social fabric is slipping into disorder, economy is in shambles, educational sector has suffered immensely, tourism inflow is zero...and people are feeling suffocated. We shall have to ponder over how long we are going to allow this self destruction to continue?” she said.

“We shall have to reinforce our resolve to work through peaceful means and through public participation towards resolution of the problems and restoration of peace in the state,” she said.