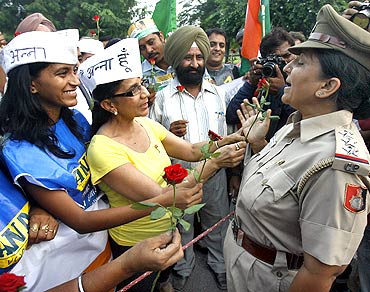 It is the era of short messages, and in keeping with the times we kick off a new feature where our writers tell it like it is, in just a few words. Today, Faisal Kidwai lets off on middle class principles, rather the lack of them


The hypocrisy of India's middle class is mind-boggling. We are the ones who form the largest chunk of bribe-takers, and there we are protesting against corruption. (The upper class don't take bribe, they only give.)

If the middle class was really against corruption, the problem would not have gotten so bad in the first place. The first person any aam aadmi encounters at any government office is the babu -- and from there the chain of bribe extends right down to the top.

Now, the same people who have been benefiting from the system claim they want to change it.

So, that means the guy who takes Rs 500 for simply pushing the file to his boss is ready to forego the very welcome cash and live only on his salary?

Or, the policeman who demands Rs 100 from every truck driver from now on will be fine to survive on his monthly take?

If you honestly believe these people will stop taking bribe simply because the government has passed a new law, then you are either naïve or too optimistic.

But the hypocrisy of the middle class does not end there.

When it comes to religion, we are the first ones to beat our chest, although almost all of us do not follow the true tenants of our religion. If we did, there would not be any bribe, cheating, adulteration or fraud in the first place.

The same people who religiously go to mosque, church or temple start lying, scheming the minute they are out of the holy place. Sometimes, they even lie when they are inside the holy place.

Then there is, of course, morality, our class's favourite target. An actress kisses a man in public and the moralists start foaming. Wonder what would happen if an actress kisses another actress in full public view?

And then there is nationalism and jingoism. The middle class never misses an opportunity to claim how much it loves India. A very fine sentiment that is sadly not true.

The middle class has mastered the art of hypocrisy so well that it is unable the see the difference between really loving something and making empty noises.

If that is how we show love then I would rather have us hate India.

If India wants to evolve into a real democracy with strong institutions, transparent government and civic sense, then a mature middle class is extremely important. 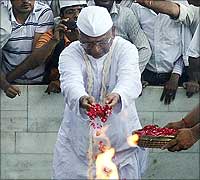 A recent article in the Wall Street Journal sought to analyse the success of Anna Hazare's experiment in his home village of Ralegan Siddhi.

It pointed out that the 'drought-ridden and impoverished village characterised by alcoholism and social deprivation is now almost a textbook example of grassroots, sustainable and equitable development'.

What it also did, however, was question if the model could work without its architect.

It rightly observed that Hazare's 'particular combination of charm and brutality is difficult to replicate and perhaps sits uneasily within India's pluralistic democracy'.

Going by her Twitter timeline, it's safe to say the young lady reporter who wrote the piece has received considerable hate mail.

At one point, she even pointed out that she wasn't anti-Anna at all.

Personally, that was the tipping point for me.

Reading that tweet, it struck me that if I wasn't supporting Anna Hazare, I would in all probability be counted as among those who are against him.

As a country and indeed as a culture, we are conditioned to seeing issues in just black and white.

Any contrary opinion is usually met with vehement and often violent response.

Hazare, like Gandhi has become something of a demigod, which is good in a way -- he can and has mobilised the masses like no one else since Independence. But on the flipside can we admit that a demigod could perhaps also do something wrong? Going by our record, probably not.

I won't even bother suggesting how important it is to accept Hazare with his faults and correct him if he's wrong. Because in all probability we won't.

What I would like to say, however, is the only way to take what Anna Hazare has started forward is to first admit that it isn't his fight. It is yours and it is mine.

So the next time you jump a red light, rather than slipping a hunner under the table, pay for the crime you committed.

Anna Hazare would probably pat you on the back. So would Gandhi. 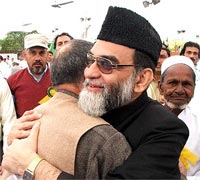 The Imam Bukhari of New Delhi's Jama Masjid has proved that you need real commitment to preach sheer stupidity.

In a statement carried he has appealed to Muslims to stay away from Anna Hazare's movement because the protesters are raising slogans such as 'Bharat Mata ki Jai' and 'Vande Mataram' which, according to him, are un-Islamic.

Well, first things first. The incumbent, Syed Ahmed Bukhari's father Syed Abdullah Bukhari has always supported the government in power. He has a long history of backing the administration, whether it is VP Singh's government, the BJP or the Congress.

These days the Congress is in power, so Imam Bukhari is supporting them by taking a stand against Anna Hazare.

His views are not based on religion, the Holy Book or even principles. All he cares about is maintaining his ever-dwindling power base.

His political stand can be summed up by the statement made by Groucho Marx: "Those are my principles, and if you don't like them... well, I have others."

Contrary to perceptions created over years by the media regarding Imam Bukhari, he does not even represent the Muslims of Delhi, let alone Muslims of India.

He was created by the Congress, helped by the media and his support base has always been limited to areas surrounding the Jama Masjid.

Apart from those who want to ride on his coattails, Muslims around the country have never paid any attention to his statements or his diktats.

Now, in an effort to remain in the news, he has called on Muslims to not support a protest movement, not because the movement might lack merit or that the Jan Lokpal Bill might have glaring shortcoming.

No, sir, his stand, like always, is not based on rational reasons, but on headline-grabbing.

By the way, how is 'Bharat Mata ki Jai' un-Islamic? As far as I can see, it is just a slogan in praise of your country. If anything, having an imam like Bukhari is un-Islamic.

If Imam Bukhari has such a problem with 'Vande Mataram' or 'Bharat Mata ki Jai' then he should, frankly, leave India and live somewhere else, preferably in Pakistan, where he would feel very comfortable among the religious nuts ruling the streets. 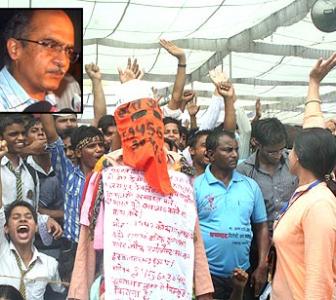 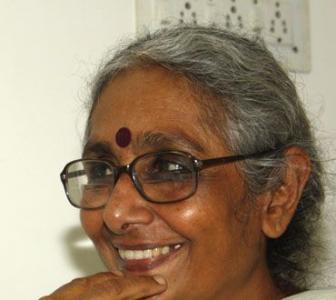 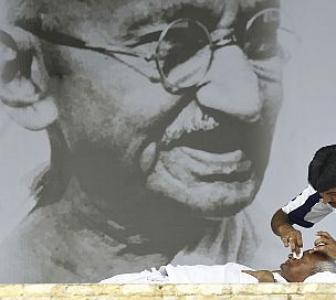 No quick-fix solutions to corruption 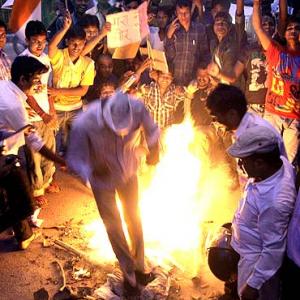