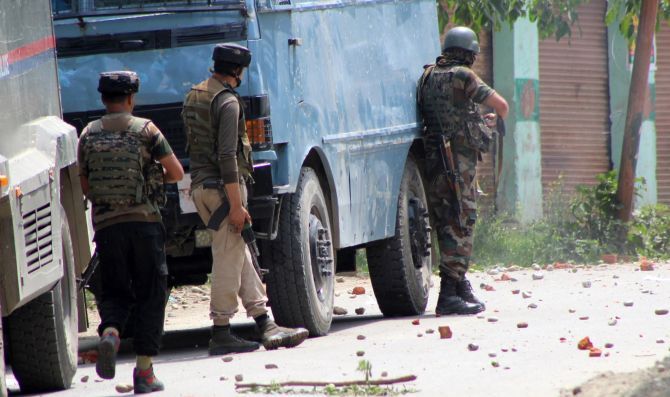 IMAGE: Security personnel during an encounter in Shopian on Tuesday. Photograph: Umar Ganie for Rediff.com

Two terrorists were killed and a security personnel was injured on Tuesday in an encounter in Jammu and Kashmir's Shopian district, police said.

A civilian man was also killed while 20 others were injured in clashes between stone-pelters and security forces near the encounter site in Kundullan village, they said.

Bodies of two terrorists were recovered from the site at Kundullan in the district, a police spokesman said.

Security forces launched a cordon and search operation in the village early on Tuesday morning following information about the presence of terrorists there, a police official said.

He said the search operation turned into an encounter after the terrorists opened fire on the security forces, who retaliated.

The official said a jawan was injured in the exchange of fire with the terrorists.

He said a large number of civilians rushed towards the encounter site at Kundullan and started pelting stones at security personnel.

Tamsheel Ahmad Khan of Vehil in Shopian died after suffering head injuries during the clashes, a police official said.

He said 20 other persons were injured of which eight were referred to hospitals here for specialised treatment.

Source: PTI© Copyright 2021 PTI. All rights reserved. Republication or redistribution of PTI content, including by framing or similar means, is expressly prohibited without the prior written consent.
Related News: IMAGE, Kundullan, Shopian
SHARE THIS STORY
Print this article