Air Chief Rakesh Kumar Singh Bhadauria on Friday described the Indian Air Force shooting down its helicopter in Kashmir on February 27, when Indian and Pakistani forces were engaged in a dogfight, as a 'big mistake' and said disciplinary action is being taken against officers held responsible for the incident. 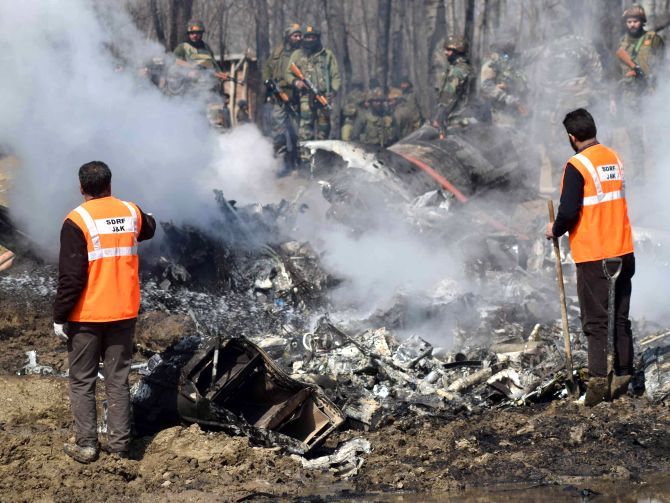 IMAGE: A surface-to-air missile of the Indian Air Force brought down the Mi-17 aircraft in Kashmir's Budgam on the morning of February 27 when the Indian and Pakistani air forces were engaged in a fierce dogfight. Photograph: Umar Ganie/Rediff.com

A surface-to-air missile of the Indian Air Force brought down the Mi-17 aircraft in Budgam in the Kashmir Valley, killing six IAF personnel on board the chopper and a civilian on the ground.

The court of inquiry ordered into the incident has completed its probe and it has been established that the helicopter was hit by IAF's own missile, Bhadauria, who over as chief of the air force on Monday, said while addressing his first press conference.

"It has been established that the helicopter was hit by our own missile. We have already taken administrative action. Disciplinary action is being taken against two officers. We admit that it was a big mistake and necessary steps have been taken so that such incident does not recur," he said ahead of Air Force Day on October 8.

Before the press conference, the IAF showed representational video clips of the Balakot strike.

Administrative action has already been taken against four officers held responsible for the helicopter crash by the CoI. Separately, disciplinary action like court martial procedures are being initiated against two senior officers, IAF officials said.

The probe found there were 'vital gaps' in communication and coordination between the ground staff and the crew of the chopper. It also found violations of standard operating procedures.

Earlier, military sources said the probe found that the 'Identification of Friend or Foe' system on-board the helicopter was switched off and there were "vital gaps" in communication and coordination between the ground staff and the crew of the chopper.

In early May, the IAF transferred the Air Officer Commanding of Srinagar base to ensure a thorough probe into the incident.

The first four of 36 Rafale jets will come to India by May next year and the aircraft will significantly enhance the IAF's combat prowess, Air Chief Marshal Bhadauria said.

Air Chief Marshal Bhadauria said the acquisition of the Rafale aircraft and the S-400 missile systems will give major boost to IAF's operational capability.

India sealed a deal with Russia in October last year to procure a batch of S-400 air defence missiles at a cost of $ 5 billion.

The IAF Chief also said the induction of the potent Apache attack helicopters and Chinook heavy lift helicopters has already added a punch to the force's overall aerial prowess.

Defence Minister Rajnath Singh is scheduled to travel to France on October 7 on a three-day visit, primarily to receive the first Rafale fighter jet.

Air Chief Marshal Bhadauria said though India will receive the first Rafale jets next week, the aircraft will come to India only in May.

"A batch of four Rafale jets will come to India in May next year," he said.

Asked whether IAF was looking at buying another batch of 36 Rafale jets, the IAF chief said no such proposal is on the table and that the force is focussing on acquiring 114 fighter jets as announced last year.

The air chief said that the IAF is prepared to fight at 'short notice' and is fully ready to respond to any terror strike from Pakistan.

He described as 'new threat' the dropping of consignments of weapons by drones in border areas of Punjab allegedly by Pakistan-based terror groups and vowed to take 'action' to deal with incidents of airspace violation.

He also said that the IAF is monitoring development of military infrastructure by China along the Tibetan region, noting that it was not an issue of great concern.

"The IAF is prepared to fight at short notice in full synergy with the other two sister services... Our operational preparedness has been of a very high order," he said.

He said the IAF has achieved a number of operational milestones during the last one year including the strikes on a terrorist training camp in Pakistan's Balakot.

"While we are proud of our past, we do not rest on our past laurels. Our primary focus is to continue to build and maintain effective air power for the future," he said.

Asked whether the IAF was ready for another Balakot-type strike, the Air Chief Marshal said any terror activity or strike from Pakistan would be responded to according to government's directive.

"Whatever be the targets, they will be taken care off," he said.

Asked whether Pakistan would be able to block IAF's communication network in future, he said necessary infrastructure has been put in place to ensure safe radio communication.

Wing Commander Abhinandan Varthaman, who downed the Pakistani F-16, could not hear radio messages during the aerial combat on February 27 as the communication was jammed by Pakistan. Minutes later his MiG 21 Bison was hit and he was held captive in Pakistan for three days.

"They will not be able to hear and jam our communication network," said the Air Chief.

On reports that the terrorist training camp in Balakot has been 'reactivated', he said, "If we had not carried out the Balakot strikes, then the level of activities would have been in greater intensity."

When asked about incidents of Pakistani terror groups dropping arms in Punjab border using drones, he said, "I would not say it is a very serious threat. It is a new threat. It is not something which we had not anticipated. Some measures were taken already to deal with the situation."

"It is an issue of airspace violation and necessary steps will be taken...Action has been initiated," Air Chief Marshal Bhadauria added.

"We are working on our own infrastructure. It is not an issue of some great concern. We know exactly what is happening," he added.

The IAF Chief said the induction of new generation combat aircraft and lethal precision weapons will provide the force with an overwhelming offensive capability to deter and punish the enemy.

"Our air defence network has also been strengthened by the induction and integration of modern sensors and weapon systems. We are progressively nearing our goal of establishing a robust network centric operations capability," he added.