Shoot him wherever he is: UP gangster Vikas Dubey's mother

Shoot him wherever he is," said the angry mother of history-sheeter Vikas Dubey, whose henchman killed eight policemen in an ambush when they came to arrest him from his hideout in a village near Kanpur. 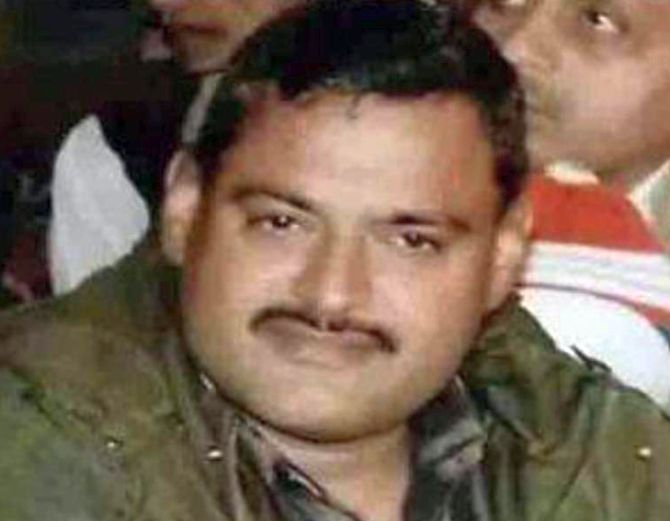 Uttar Pradesh Police has announced a Rs 50,000 reward for information leading to the arrest of Dubey, who has at least 60 cases against him including murder and attempt to murder.

An official said there was a possibility that Dubey may have fled to Nepal or taken shelter in a neighbouring state.

He was named an accused in the murder of Santosh Shukla, a minister of state-rank Bharatiya Janata Party leader, inside a police station in 2001 but was acquitted.

His mother Sarla Dubey is angry over the brutal killing of the police personnel.

She says no mercy should be shown to her son.

"Maar dalo unko, jahaan rahe maar dalo (He should be gunned down, wherever he is found)," she told a news channel.

"People came and told me about the incident. I also saw it on TV. One who has given so much pain to others must pay for his sin," she said.

WATCH: 'One who has given so much pain to others must pay for his sin'

Her husband left it to the government to take appropriate action against his son.

"I did not have any information about the incident. I had taken medicines and was lying in a semi-conscious state. When I cannot speak for myself, then how can I speak for others," he said.

When asked whether he had asked his son to stop criminal activities, Ramkumar merely said, "He had left this place during his student days and had been living with my brother-in-law."