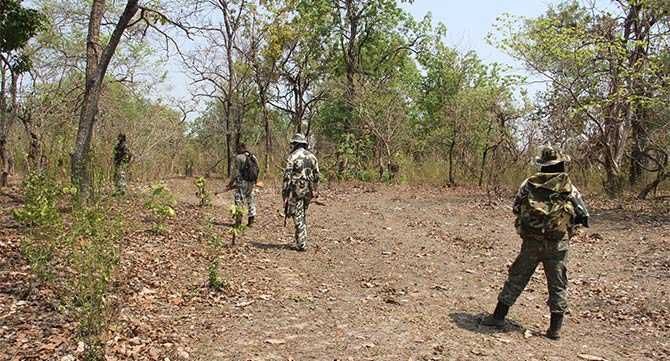 Shoot-at-sight orders have been issued to security forces deployed across Left Wing Extremism affected states after a 'serious and new' threat of possession and operation of drones by Maoist cadres came to light recently, officials said on Sunday.

The latest directive by a unified command of security and intelligence agencies at the Centre comes in the wake of a maiden incident where drones or unmanned aerial vehicles (UAVs) were seen hovering over a strategically important CRPF camp in the worst Naxal-violence affected district of Sukma in Chhattisgarh's south Bastar region.

The drones emitted a 'low whizzing sound' that drew attention of camp guards after which offensive position was taken by troops and an alert sounded across all the nearby camps anticipating possible trouble by Naxals.

However, sources said, the mini-UAVs soon disappeared from the sky above the CRPF camps even before they could be aimed at and shot.

The development rang alarm bells in the security establishment leading intelligence agencies to a vendor in Mumbai who is suspected to have sold the drones to some unidentified persons, possibly Naxal cadres.

Inquiries in this context are ongoing, sources added.

Agencies are particularly concerned as the two camps where these drones were spotted are located deep inside the Naxal hotbed, do not have proper road connectivity and witness regular movements of armed Maoist cadres as the area shares border with Odisha, Maharashtra and leads to the jungle corridor of Andhra Pradesh.

"This development is a serious concern. Possession and operation of drones by Maoists is a new challenge which has been anticipated by security agencies for long. The issue has now surfaced," a top-ranking security official official privy to the development said.

He said "shoot-at-sight orders have been issued to security forces all across the LWE affected states to take down such rogue drones or UAVs being operated by Naxals."

A preliminary analysis of the incident estimates that the drones that were spotted were basic variants of a four-legged UAV that is controlled from the ground using a remote control and is used in capturing videos and photos of social events like wedding and public gatherings.

Agencies suspect Naxalite cadres have recently acquired these mini drones to conduct reconnaissance of security forces camps, monitor activities inside and even detect their movements near their hideouts.

"Till the time we have a uniform policy on countering enemy drones, it has been decided to shoot down such objects so that lives and activities of security personnel are not at risk, the official quoted above said.

A back-of-the-envelope estimate by national security agencies suggests that India had over 6 lakh rogue or unregulated unmanned aerial vehicles (UAVs) even as security agencies are analysing modern anti-drone weapons like 'sky fence' and 'drone gun' to counter terror or similar sabotage bids by these aerial platforms.

PTI had first reported in September that security agencies have prepared an official blueprint that states unregulated UAVs and remotely-piloted aircraft system are a 'potential threat' to vital installations, sensitive locations and specific events and a 'compatible solution' is required to counter them.

Neelabh Srivastava
© Copyright 2021 PTI. All rights reserved. Republication or redistribution of PTI content, including by framing or similar means, is expressly prohibited without the prior written consent.