Just 15 months after losing power, Bharatiya Janata Party leader Shivraj Singh Chouhan was back as Madhya Pradesh Chief Minister on Monday night for a record fourth term and immediately faces the daunting task of stemming the spread of the coronavirus. 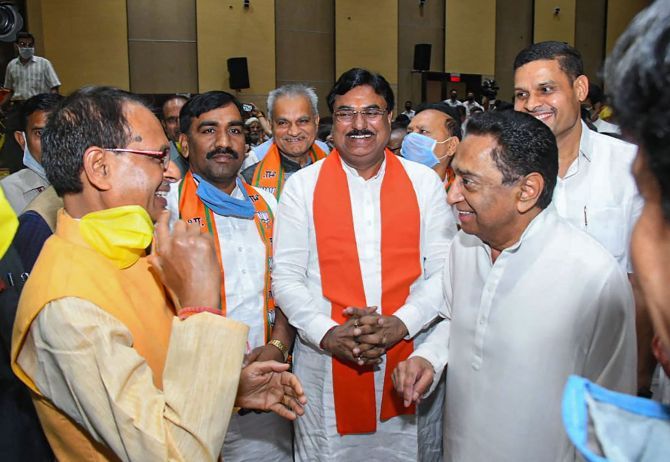 The 61-year-old MLA from Budhni took oath of office in a simple function at Raj Bhawan, where he was sworn-in by Governor Lalji Tandon at 9 pm.

Chouhan was on the only one to be sworn-in and is likely to name his cabinet later this week.

In the evening, Chouhan was elected leader of the state BJP legislature party at its meeting in Bhopal. 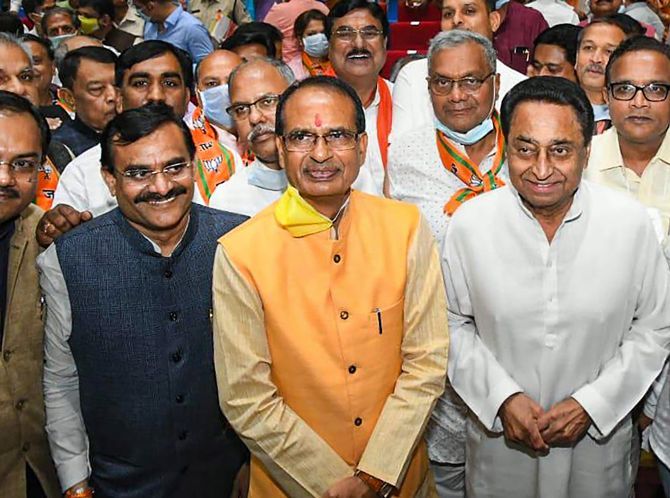 IMAGE: Chouhan and Nath with other leaders during the swearing-in ceremony. Photograph: PTI Photo

He reached Raj Bhawan about half an hour before the ceremony to stake claim to form the government and completed other formalities.

The function was not open for the media. However, BJP MLAs, most of them wearing masks, reached the Raj Bhawan from BJP office in three buses amid the coronavirus scare. 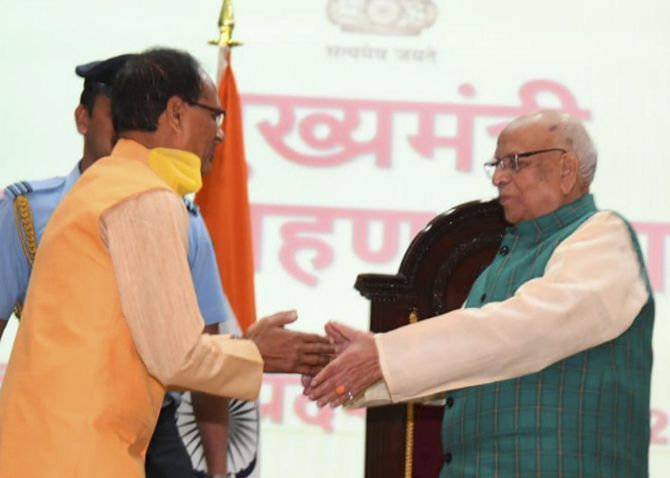 Some BJP leaders accompanied these MLAs, who were seen flashing victory.

The Madhya Pradesh BJP legislature party unanimously elected Chouhan as its leader, paving the way for him to take over as chief minister, succeeding Nath, whose government collapsed following a rebellion by 22 Congress MLAs.

In the meeting, senior BJP MLA and ex-leader of opposition Gopal Bhargava proposed the name of Chouhan as legislature party leader, which was endorsed by Narottam Mishra, Vijay Shah, Meena Singh, Paras Jain and other MLAs.

After this process, party's central observer, general secretary Arun Singh, who was participating through video conferencing from Delhi, announced Chouhan's name as leader of the BJP legislature party.

This will be Chouhan's forth term as CM. He had became CM for the first time in November 2005. 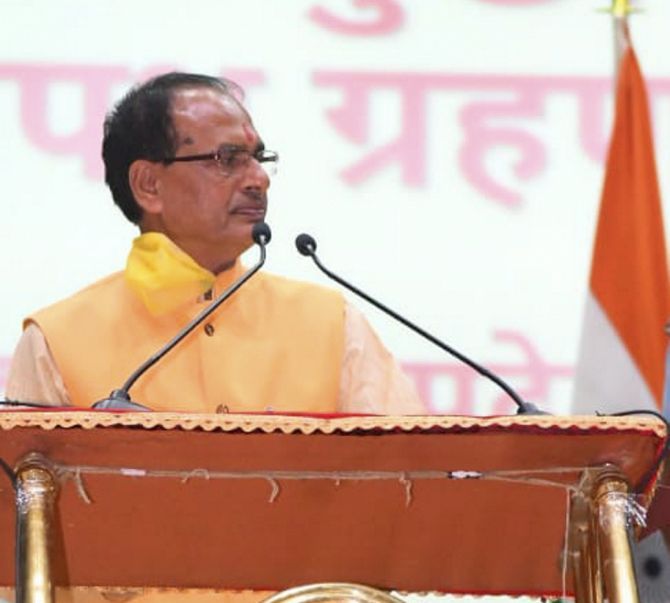 Later, he won two consecutive assembly elections in 2008 and 2013 and extended his term in office, eventually becoming the longest-serving CM, a record earlier held by Congress veteran Digvijaya Singh (1993-2003).

Popularly known among his followers as 'Mamaji', Chouhan was sworn in chief minister thrice earlier -- in 2005, after Uma Bharti stepped down over a riots case, and for later two full terms in 2008 and 2013.

After failing to gain majority in November 2018 Assembly election, which was a closely fought affair between the BJP and the Congress, Chouhan had to step down as CM on December 12, 2019.

The BJP (109 seats) lost the election despite getting more vote share than the Congress, which emerged as the single largest party with 114 seats.

In the 230-member house, the BJP currently has 107 legislators. The Congress strength got reduced to 92 following the resignations of 22 of its MLAs. 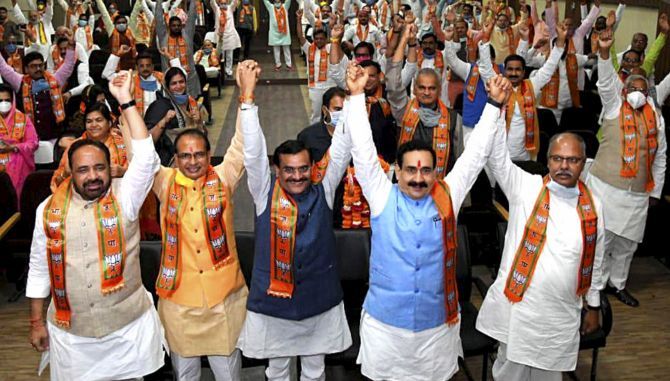 IMAGE: Chouhan is greeted by party leaders Gopal Bhargava, left, V D Sharma and others after the former was elected as the leader of BJP Legislative Party, at BJP State headquarters in Bhopal, on Monday. Photograph: PTI Photo

Stumped by the rebellion of party colleague Jyodiraditya Scindia, who joined the BJP and resignations of 22 Congress MLAs, Nath resigned as chief minister last week, paving way for Chouhan's return.

Nath stepped down on March 20 after the assembly speaker accepted the resignations of rebel Congress MLAs.

With this, the strength of the house also reduced to 222, trimming down the majority mark to 104.

In this situation, the BJP has the majority with 107 MLAs and it is likely to get the support of Independents as well as Bahujan Samaj Party and Samajwadi Party MLAs.

Earlier, the Supreme Court, while hearing a petition filed by Chouhan, had directed Nath to prove his majority on the floor of the assembly by 5 pm on March 20.

Nath opt to resign instead of facing the floor test. 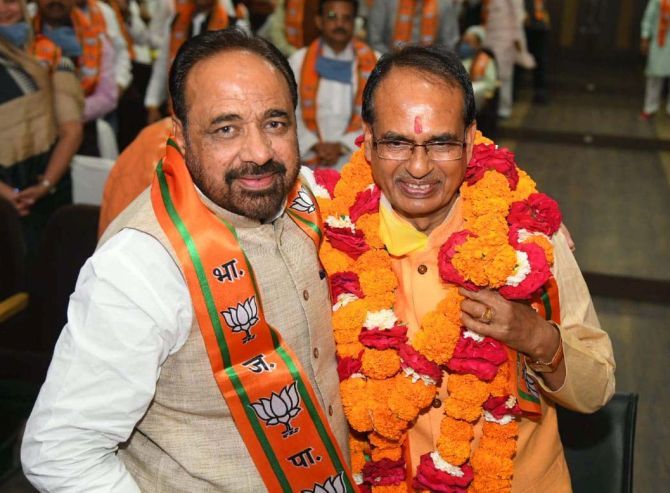 Born on March 5, 1959, to a farming family of Prem Singh Chouhan and Sundar Bai at village Jait in Sehore district, Chouhan's long journey in public life began with the Rashtriya Swayamsevak Sangh (RSS) when he was just 13 years.

Chouhan rose through the ranks in the BJP and became one of the formidable state leaders of the saffron party.

During his decades-long political career, he served in different party posts and also as an MLA, MP and eventually became chief minister.

'Congratulations to Shri @ChouhanShivraj Ji on taking oath as CM of Madhya Pradesh. He is an able and experienced administrator who is extremely passionate about MP's development,' Modi wrote on Twitter.

He extended best wishes to Chouhan for 'taking the state to new heights of progress.'