A man, who was suspected to be involved in clashes Karnataka's Shivamogga and stabbed a person, was shot in the leg when he allegedly tried to attack the policemen who went to detain him, police said on Tuesday. 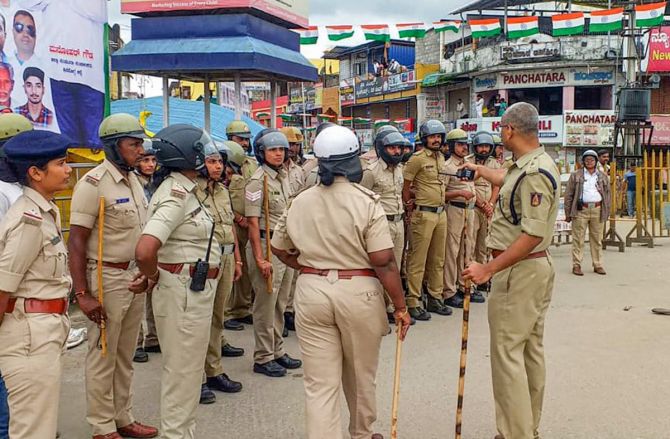 Mohammed Zabi alias Charbi (30), a resident of Marnami Bailu in this district headquarters town, is recovering in a hospital after the incident today.

According to police, Prem Singh (aged 20) was stabbed after clashes broke out between two communities in the town over putting up banners of Hindutva ideologue Vinayak Damodar Savarkar and 18th century Mysuru ruler Tipu Sultan on Monday.

Soon after the clash, prohibitory orders under section 144 of the IPC were imposed in the town.

A case of attempt to murder was registered under section 307 of IPC against Nadeem, Tanveer, Charbi and Abdul Rehman and they were arrested.

The district administration also declared holiday to schools and colleges in Bhadravati and Shivamogga towns today.

On Tuesday morning when a police team had gone to detain Zabi, he allegedly tried to attack the personnel. In self defence, sub-inspector Manjunath S Kuki of Vinoba Nagar police station shot in his right leg, they said.
He was rushed to a government hospital, where he is recovering.

Meanwhile, Additional Director General of Police (Law and Order) Alok Kumar told reporters that the stab victim hails from Rajasthan and was an employee of a garment shop where the clashes broke out.

Singh was not involved in the clashes but was stabbed by four people who have been arrested.

“We have arrested four people. We will interrogate them to find out any background and ideological support to them, or their ideological leanings,” the ADGP said.

He also said the sector wise 'bandobast' and patrolling will continue for continue for the next three days and after reviewing the situation, police will decide the next course of action.