Maharashtra Shiv Sena MLA and minister Eknath Shinde on Sunday moved the Supreme Court against the disqualification notice issued by the deputy speaker to him and 15 other rebel legislators. 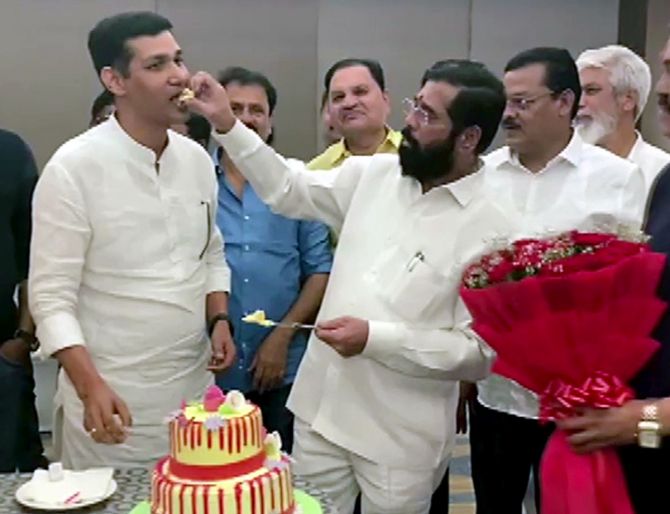 A vacation bench of justices Surya Kant and J B Pardiwala is likely to hear on Monday the plea by Shinde, who along with a sizeable number of Sena MLAs, is currently camping in Guwahati in Assam since June 22.

The rebel group led by Shinde is demanding that Shiv Sena should withdraw from the Maha Vikas Aghadi alliance, which also comprises the Congress and the Nationalist Congress Party, but Sena supremo and Chief Minister Uddhav Thackeray has refused to give in and the party has now asked the dissidents to quit and contest polls again.

The Maharashtra legislature secretariat on Saturday had issued 'summons' to 16 rebel Shiv Sena MLAs including Shinde, seeking written replies by the evening of June 27 to the complaints seeking their disqualification.

Signed by Rajendra Bhagwat, principal secretary of the Maharashtra Vidhan Bhavan, the summons were sent to all 16 MLAs named by the Shiv Sena's chief whip Sunil Prabhu in a letter.

Prabhu had earlier asked the rebel MLAs of the Shinde faction to attend a party meeting in Mumbai on Wednesday but none of them turned up.

Subsequently, the Sena submitted two letters to the legislature secretariat, seeking disqualification of 16 MLAs including Shinde.

The summons issued by Bhagwat on Saturday said that Prabhu had submitted a letter to deputy speaker of the Assembly Narhari Zirwal seeking their disqualification under The Members of Maharashtra Legislative Assembly (Disqualification on ground of Defection) Rules, 1986.

'In your defence of the summons, you need to submit your written response before 5.30 pm on June 27 (Monday) supported by all the necessary documents.

'If the written response to the summons is not submitted in a given period, it would be considered as you have no say over it.

'The office will initiate necessary action based on the complaint filed by Prabhu against you,' the letter said.

The Shinde group, which claims to have the support of more than two-thirds of Sena MLAs, has contened that Prabhu has been replaced as party whip by Bharat Gogawale.

In Guwahati, sources said that the MLAs were holding meetings since Sunday morning, discussing various options after the notices were issued to them.

Another minister, Bachu Kadu of Prahar Janshakti Party, and an Independent minister from Sena quota, Rajendra Yedravkar, have also been camping with Shinde.