Eknath Sambhaji Shinde, who on Thursday became the 20th chief minister of Maharashtra, once drove an auto-rickshaw to earn a living before rising as a formidable Shiv Sena leader. 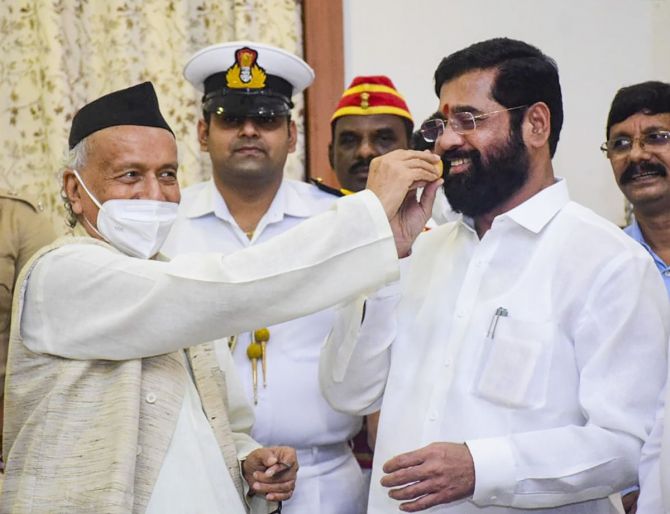 The 58-year-old leader who hails from western Maharashtra's Satara district shifted to Thane, a Sena bastion adjacent to Mumbai, in his young days and started his political career in the same city.

On the contrary, he made it a point to mention it to underscore how he has been indebted to the Shiv Sena and its founder, the late Bal Thackeray, for his rise in Maharashtra politics.

Born on February 9, 1964, Shinde dropped out of college before completing graduation. After moving to Thane, he soon found his calling as one among thousands of Shiv Sena cadres who were ever-ready to hit the streets at the command of Bal Thackeray.

Thackeray formed the Shiv Sena in 1966 as a party fighting for the rights of the 'sons-of-the-soil' Marathi-speakers, and later aggressively championed the cause of `Hindutva'.

As Shinde joined the Sena in Thane, he found a mentor in local party stalwart Anand Dighe. He became Dighe's deputy and strengthened the party in Thane-Palghar region after Dighe's sudden death in 2001.

The sitting MLA from Kopri-Pachpakhadi in Thane city, Shinde was once a quintessential Shiv Sena street-fighter. He faces dozens of criminal cases for charges such as `voluntarily causing hurt by dangerous weapons' and rioting, registered during various party agitations.

He became a corporator in the Thane Municipal Corporation in 1997 and won his maiden assembly election in 2004. In 2005 he was made the Sena's Thane district chief.

Currently he is in his fourth term as an MLA, while his son Dr Shrikant Shinde is the Lok Sabha MP from Kalyan in the district.

Shinde was appointed the Leader of Opposition in the Maharashtra legislative assembly for a brief period in 2014 when the Sena initially refused to join the Devendra Fadnavis cabinet.

The party later joined the BJP-led government, and Shinde became a cabinet minister.

His closeness to Chief Minister Fadnavis set tongues wagging. It was also noted that the BJP contested elections to all civic bodies in Maharashtra in 2016 against the alliance partner Shiv Sena, except in Thane, Shinde's home turf.

When the Shiv Sena snapped ties with the BJP, and Sena president Uddhav Thackeray became chief minister of the Maha Vikas Aghadi (MVA) government with the NCP and Congress as allies after the 2019 elections, Shinde became a cabinet minister for the second time.

During the Covid-19 pandemic, despite the NCP handling the health ministry, it was the Shinde-controlled Maharashtra State Road Development Corporation that set up healthcare centres in Mumbai and its satellite cities to treat coronavirus patients.

His closeness to Fadnavis apparently made the Sena leadership suspicious. Shinde was made guardian minister of the Naxal-hit Gadchiroli district (along with Thane), which was seen as a put-down.

Shinde, however, remained a key Sena leader, as he had developed a strong support base of his own.

After managing to take away majority of Sena MLAs with him and becoming chief minister, Shinde's next challenge would be to wrest control the party organisation from Uddhav Thackeray and his loyalists.