Five days after the induction of 18 ministers into his cabinet, Maharashtra Chief Minister Eknath Shinde on Sunday distributed portfolios, with the Bharatiya Janata Party getting several key ministries, including the Home and Finance that will be handled by Deputy CM Devendra Fadnavis. 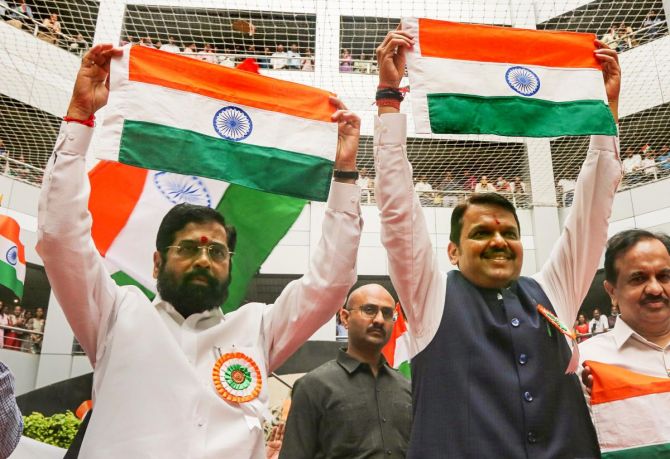 Shinde kept Urban Development and 11 other ministries with himself.

Shinde, whose rebellion against the Shiv Sena leadership had led to the collapse of the Uddhav Thackeray-led Maha Vikas Aghadi (MVA) government, had taken oath as the chief minister on June 30 with the support of the BJP.

Fadnavis was sworn in as his deputy.

In addition to Home and Finance and Planning, Fadnavis will also handle Law and Judiciary, Water Resources, Housing, Energy and Protocol portfolios.

Another important portfolio -- the Revenue Department -- has been given to BJP leader Radhakrishna Vikhe Patil, who had quit the Congress a few months before the 2019 Assembly elections to join the saffron party.

Shinde had expanded his two-member ministry on Tuesday, 41 days after taking oath as the chief minister by inducting 18 ministers -- nine each from his rebel Shiv Sena group and the BJP. However, the list did not include any woman.

Chandrakant Patil, considered close to Union Home Minister Amit Shah, has been allocated Higher and Technical Education, Textile and Parliamentary Affairs ministries. In the past, he had handled PWD and Cooperation ministries.

During his 2014-19 stint, he had headed Finance and Planning as well as Forest ministries.

Atul Save has been given Cooperation and OBC Welfare departments, while Ravindra Chavan has got PWD and Food and Civil Supplies and Consumer Protection ministries. Both of them were Minister of State for a brief period in the past.

Fadnavis' close confidant Girish Mahajan has been given the responsibility of Rural Development and Panchayati Raj, Medical Education and Sport and Youth development.

Dr Vijaykumar Gavit has been given Tribal Development department, while BJP MLA from western Maharashtra, Suresh Khade has been given the responsibility of Labour ministry.

From the Shinde-led group of Shiv Sena rebels, Deepak Kesarkar is the new minister for School Education.

Abdul Sattar has been given agriculture department.

Uday Samant, who was previously the Higher and Technical Education minister, has been given the Industries department.

Controversial leader from Shinde camp, Sanjay Rathod, will handle Food and Drugs Department. Rathod, who was the forest minister when Uddhav Thackeray was the chief minister, was forced to resign after BJP leaders blamed him for a woman's suicide.

While Tanaji Sawant has been given the responsibility of Public Health and Family Welfare department, Shambhuraj Desai will handle the Excise department, and Sandipan Bhumre Employment Guarantee Scheme and Horticulture ministries.

Meanwhile, Fadnavis on Sunday said the BJP and the Shinde camp can exchange some portfolios ahead of the next cabinet expansion if needed.

"There is no dispute between the BJP and CM Eknath Shinde-led Shiv Sena over the portfolio distribution. If required, we can exchange some portfolios ahead of the next cabinet expansion," said Fadnavis.

He was responding to a query about himself and Shinde holding several portfolios among themselves. 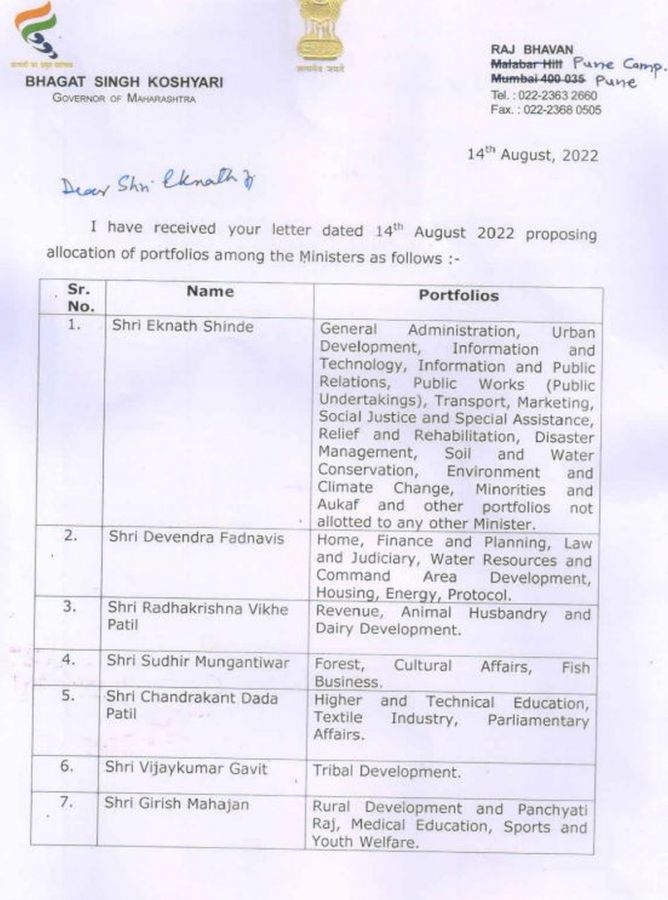 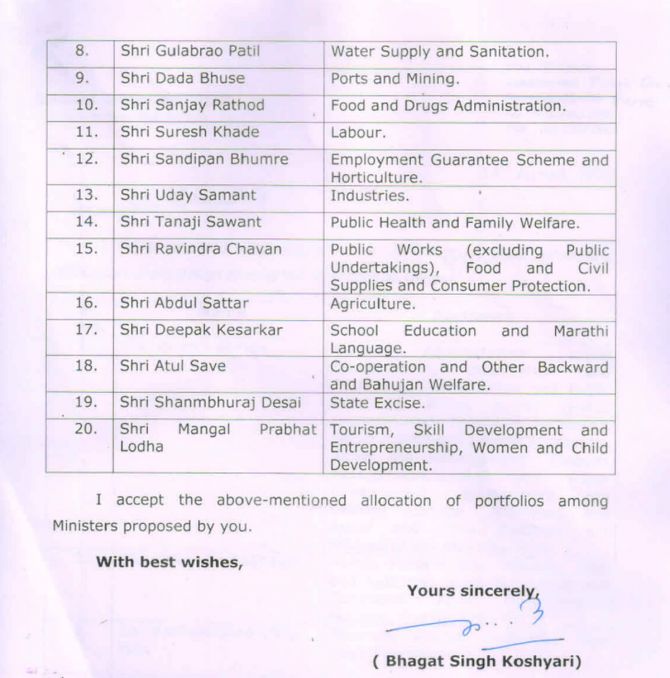