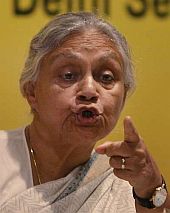 According to reports, Dikshit's political secretary Pawan Khera sent a legal notice to Kejriwal for allegedly using filthy language against the chief minister.

Kejriwal has also been accused of maligning the Delhi government, the report said.

Kejriwal has been given two days to respond to legal notice for civil and criminal defamation, failing which the government will take the next legal step.

Meanwhile, Dikshit said on Monday that the masses should not fall into the trap of "mischievous" elements and "seasonal frogs".

The India Against Corruption led by Kejriwal has been at loggerheads with the Delhi government over the demand that the hike in power tariff be rolled back.

Kejriwal has asked people not to pay power bills till the tariff is brought down.