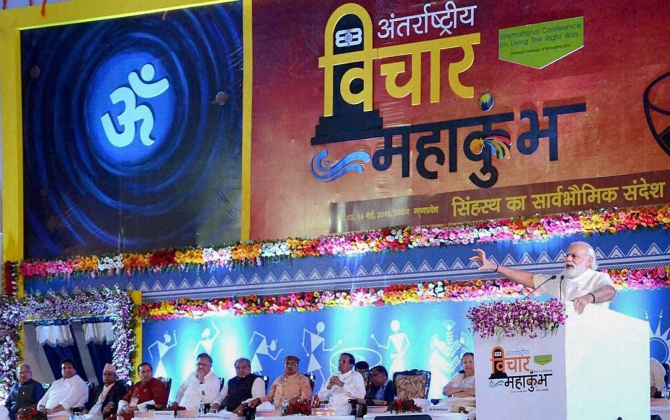 Warning that global warming and terrorism have become the world's biggest concerns, Prime Minister Narendra Modi on Saturday said shedding the "holier-than-thou" attitude is the key to overcoming these issues and resolving conflicts.

“World's biggest concerns are global warming and terrorism... the holier than thou attitude apparently is behind them," Modi said addressing the valedictory session of the three-day international conference on "Living the Right Way" on the sidelines of Simhastha-Kumbh mela in Ujjain.

"The world is passing through two types of crises. On the one hand there is global warming while on the other there is terrorism. What is the solution ? What is behind their genesis...simply holier than thou attitude or (the thinking) that my way is more correct than yours. This is the thing which is dragging us towards conflict," he said. 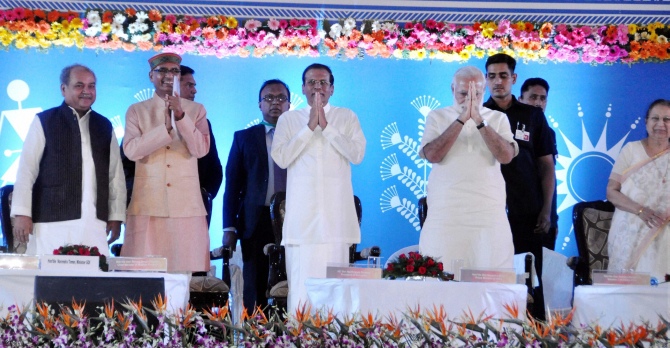 He said one of the major issues faced by the world is conflict management but the Indians know how to resolve the conflict and cited mythology to underscore his point.

"But we (Indians) inherit conflict management skills ..Indians worship Lord Rama for his obedience and loyalty to his father and in the same breath glorify Prahlad who disobeyed his father.

"The same way Sita and Mira are also worshipped, which shows that people here are well adept at conflict management," he said, adding what the world was doing today, Indians have been practising for ages.

"World Earth Day is observed (globally). In India, when a child wakes up in the morning his or her mother asks them to seek forgiveness from the earth before putting the foot down on the ground."

Simhastha Kumbh Mela is one of world's largest spiritual gatherings held once in 12 years when lakhs of devotees, including hundreds of sadhus, take dip in river Kishipra.

The three-day conference, styled as "Vichar Mahakumbh", is organised on the sidelines of the event to discuss issues like global warming, hazards of chemical farming and benefits of organic one and women empowerment among others.