Imran Khan on Sunday accused Prime Minister Nawaz Sharif of pursuing his Indian counterpart Narendra Modi’s interests in Pakistan as the government cracked down on the cricketer-turned-politician’s supporters with police arresting over 100 of them. 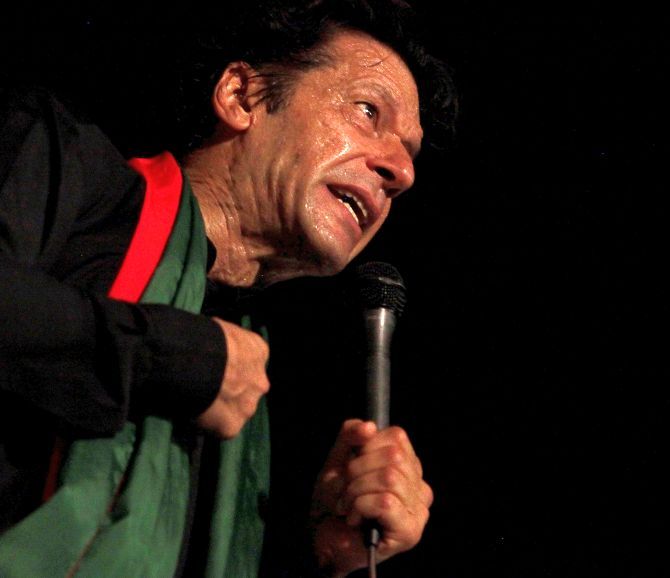 “When Nawaz Sharif went to London for whatever kind of surgery, he on the hospital bed first telephoned Modi instead of his mother or children,” Imran told a press conference outside his Bani Gala residence, referring to Sharif’s open heart surgery at a London hospital in May.

“Nawaz is following Modi’s ‘interests’ in Pakistan. Nawaz is behind the security leaks story which defamed the armed forces. Actually his and Modi’s agenda is same,” the Pakistan Tehreek-i-Insaf chairman said.

Imran asserted that “everybody knows” that sacked Information Minister Pervaiz Rashid cannot leak sensitive information to the media on his own.

Sharif on Saturday sacked Rashid over the recent “leaked” media report about a rift between the civilian and military leaderships on support to militancy.

“Rashid is a darbari (courtier) and he did what Nawaz told him to do so,” Imran said.

“The whole state machinery is being used to save a corrupt prime minister. I will not accept a ‘suspect’ as prime minister of Pakistan. As long as I am alive I will not go
after Nawaz Sharif’s corruption,” the 64-year-old leader said.

Imran stressed that there was no difference between Pervez Musharraf’s dictatorship and Sharif’s democracy. He asked under what law his party workers are being arrested and roads blocked.

“Our legal team will move the court tomorrow,” Imran stated. 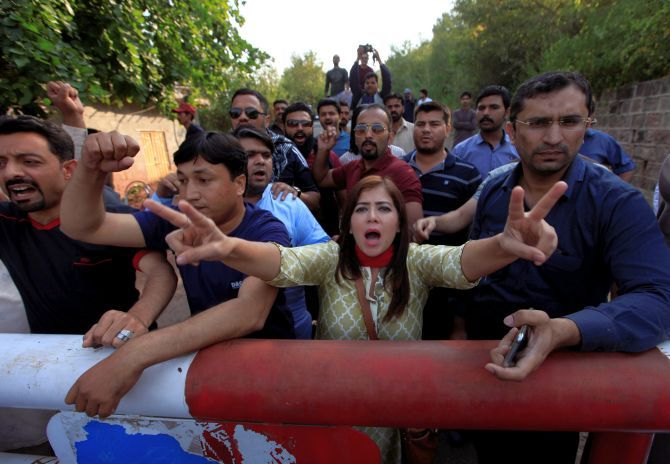 Khyber Pakhtunkhwa Revenue Minister Amin Gandapur’s car was stopped at a checkpost and searched. The car was impounded and Gandapur’s driver was detained by police, Dawn News reported.

The Pakistan Tehreek-i-Insaf has announced locking down Islamabad on November 2 to pressure Sharif to resign in connection with probe into his offshore holdings revealed in Panama Papers.

The government has already blocked provincial roads to the capital and arrested around 1,000 Pakistan Tehreek-i-Insaf workers.

Clashes erupted between police and Pakistan Tehreek-i- Insaf in Islamabad and some parts of Punjab province ahead of the party’s November 2 planned lock down of the
capital aiming to unseat Sharif.

He said police was not only arresting the PTI workers heading to Islamabad but also from their homes.

The Punjab government has started blocking all entry points leading to the federal capital. The government’s decision was causing immense inconvenience to commuters.

Punjab Law Minister Rana Sanaullah said the government had closed roads near Attock to check the movement of Pakistan Tehreek-i-Insaf workers into Punjab because they are planningto head towards Islamabad.

However, he said no other roads in the province had been blocked “completely” though snap-checking of all those heading towards the federal capital was being carried out.

Khyber Pakhtunkhwa government spokesman Mushtaq Ghani said that the federal and Punjab governments had converted the province into a prison by placing barriers on roads.

He said Prime Minister Sharif could “punish” the Pakistan Tehreek-i-Insaf workers but he had no right to create hardship for the people of the entire province.

The Peshawar-Islamabad motorway has also been closed at one point while barricades have also been placed at Mardan and Nowshera roads.

Heavy contingents of police have been deployed on various roads leading to Islamabad while transporters had been warned against facilitating the Pakistan Tehreek-i-Insaf supporters.