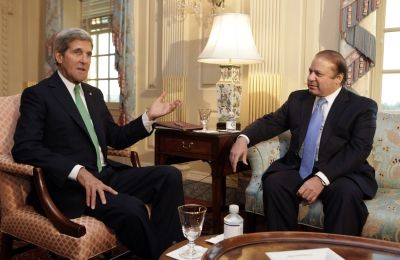 Pakistan Prime Minister Nawaz Sharif continues his exhortation for US mediation in Kashmir, and harks back to his meeting with former Prime Minister Atal Bihari Vajpayee when the latter had agreed to a resolution of Kashmir imbroglio; senior us officials assert there is ‘absolutely no change in us policy’ that Kashmir has to be resolved bilaterally. Aziz Haniffa reports.

On the eve of his summit meeting with United States President Obama at the White House, Pakistani Prime Minister Nawaz Sharif continued with his exhortation for US mediation of the Kashmir imbroglio but US officials reiterated to rediff.com that there “is absolutely no change in US policy” and that “President Obama would make clear this policy” and that this “issue has to be resolved bilaterally” between Islamabad and New Delhi.

Sharif, in a major address at the US Congress-funded US Institute of Peace, said on Tuesday, “Pakistan appreciates the constructive role the US has historically played in defusing tensions between Pakistan and India,” and argued, “With its growing influence in India, the US now has the capacity to do more to help the two sides to resolve their core issues, including Kashmir and in promoting a culture of cooperation.”

But senior US officials told rediff.com that Secretary of State John F Kerry had also made clear during the meeting with Sharif at the state department on Monday that “the US has no intention of intervening” in Kashmir and that “this is an issue that India and Pakistan has to resolve bilaterally.”

Other diplomatic observers said that the Obama administration, cognisant of India’s sensitivities on this issue, were scrupulous in eschewing even a semblance of a perception by New Delhi that the US intended to trouble-shoot in the region.

According to these observers, Kerry was also more focused on playing a major role in trying to resuscitate the Middle East process and also the volatile issues in Syria, Egypt and attempting a modus vivendi with Iran that it was unlikely that South Asia would figure on his agenda as a high priority, “unless of course a major crisis erupted between India and Pakistan.”

In fact, a senior administration official had earlier told reporters following Sharif’s call of a US role that ‘on Kashmir, our policy has not changed an iota’ and that the Obama administration’s policy remained that ‘it is for India and Pakistan to determine the pace, scope and character of their dialogue on Kashmir.’

But the official however said Washington continued to have serious concerns over terrorism launched from Pakistani territory into India, including from across the Line of Control in Kashmir and acknowledged that obviously there were vested groups intent on torpedoing Sharif’s efforts to enter into a rapprochement with India, since his election in May this year.

The official said, “Cleary, we would be concerned about the terrorist groups that would derail that dialogue process.”

In his address to a packed audience at USIP that had to be seated more than a hour before Sharif and his delegation arrived after being  subjected to an intense security check, Sharif declared that his government was "determined to transform relations with friends around the world, but more importantly with our immediate neighbors."

Saying he was fully cognisant "that the greatest challenge to Pakistan comes from terrorism and extremism," Sharif however asserted that, “Pakistan is neither a source of nor the epicenter of terrorism as is sometimes alleged.”

Prime Minister Dr Manmohan Singh, during his summit with President Obama in the White House Oval Office last month had made no bones about terrorism emanating from Pakistan, publicly declaring in Obama’s presence that Pakistan was the ‘epicenter of terrorism, and any peace process with Islamabad would be conditional on a cessation of Pakistan-based and inspired terrorism.

Sharif argued in his speech titled, Pakistan’s Vision for Peace, Stability and Development, that "in fact, Pakistan has itself been a major victim of this scourge for over a decade," and noted, "Pakistan’s sacrifices in the struggle against terrorism and extremism are well known."

“We have faced hundreds of suicide attacks in the past decade, losing 7,000 of our brave soldiers, security personnel and policemen, while our civil casualties exceed 40,000 lives,” he said.

He said, “Our sacrifices are immeasurable both in terms of the human lives and the damage caused to our infrastructure.”

Sharif said, “My government is firmly resolved to bring this cycle of bloodshed and violence to an end, but it cannot be done overnight nor can it be done by unleashing senseless force against our citizens, without first making every effort to bring the misguided and confused element of society back to the mainstream.”

“We also have to ensure that the political parties and the civil society are on the same page, so as to create an enabling environment to tackle this menace,” he added.

Sharif said that with India, “We share a common history as well as a common destiny. Our past and our future are intertwined.”

“Pakistan is happy to see the people of India live in peace and security. The people of Pakistan want to resolve all outstanding issues with India through dialogue and negotiations,” he said.

He said, “We are confident that there are areas where we can make quick progress. We also want to put ourselves on the path to normalising trade relations with India.”

Sharif recalled that, “My meeting with Prime Minister Manmohan Singh last month in New York reflected this desire and I am confident we can overcome challenges and find solution to all issues as long as we stay engaged.”

“In any case, we don’t want isolated incidents to interrupt out dialogue,” he said.

Sharif said, “Future prospects and economic development in South Asia depends on peace and security in the region. Therefore, all of us have a stake for working for these noble objectives -- for our sake as well as for the sake of future generations.”

Thus, he asserted, “It is about time that the two sides addressed their bilateral relations with utmost seriousness in order to avail themselves of the historic opportunity of devoting their energies and resources to development and betterment of their teeming millions.”

Sharif said, “Had our two countries not wasted their precious resources in a never ending arms race, we not only would have avoided the futile conflicts, but also emerged as stable and prosperous nations.”

“Pakistan desires to live in peace with its neighbor,” he said, and added, “We would not be found wanting in walking the extra mile.”

But Sharif was not averse to talking tough and declared, “As a responsible nuclear power and a major developing country, Pakistan is destined to play a key role in the region’s stability and world peace and stability.”

“Pakistan remains fully alive to protecting its sovereignty, territorial integrity, and independence,” he said, and noted, “Without engaging in an arms race, Pakistan will maintain a credible, minimum deterrence to ensure the region’s security and stability.”

Sharif said, “We would nevertheless consistently pursue the goals of disarmament on a non-discriminatory basis,” and also made a pitch for the US to enter into a civilian nuclear deal with Pakistan as it had done with India.

“It is our hope that the US will follow an even-handed and non-discriminatory approach in things like civil nuclear cooperation,” he said.