Senior Janata Dal-United leader Sharad Yadav, who is heading the faction opposed to party president Nitish Kumar, on Saturday held a parallel meeting to the party’s national executive in Patna and exhorted the people of Bihar to keep the Grand Alliance in the state intact ‘at any cost’.

Kumar’s decision to dump the alliance had dented the opposition's efforts to forge a unity at the national level, he said at the 'Jan Adalat' meeting hosted by his faction, adding that the alliance had to be maintained in Bihar ‘at any cost’.

"The BJP was winning assembly polls one after another, but its chariot was held in Bihar (in 2015), where the people gave a two-thirds majority to the alliance for five years.... The alliance has been broken, which was not a good decision at all," Yadav said.

Hitting out at Kumar, Yadav, who was recently removed by the JD-U as its parliamentary party leader, said, “This is the party which I, along with late Chaudhary Devi Lal, had formed and nurtured...a number of people broke away from the Janata Dal and now, those in the party are trying to make me homeless.”

He added that the people would decide whose course of action was right as he had not changed his ‘path’ (principles).

Yadav claimed that it was he who had suggested to Kumar, also the Bihar chief minister, not to snap ties with the National Democratic Alliance in 2013.

“I do not care who is with him (Kumar) and who is not. I will continue to fight for the people's cause and programme,” he said.

The meeting, which was meant to be a show of strength of the Yadav-led JD-U faction, was not attended by any prominent leader or state-level office-bearer of the party.

Even the district unit chiefs of the party were absent.

Only a few former Bihar ministers, ex-MLCs and ex-MPs, many of whom are not very known or active in politics, were present.

Srivastava, who was suspended by the party after the recent Rajya Sabha polls in Gujarat, said he would not resign from the JD-U.

“Those willing to join hands with the BJP should in fact resign from the party,” he added.

Srivastava claimed that 14 state unit chiefs of the party and other office-bearers attended Yadav's programme.

Despite Yadav's instructions not to name any individual or organisation, every speaker came down heavily on Kumar for ‘not taking anyone into confidence’ regarding his decision to snap ties with the Grand Alliance, comprising the Congress and the Rashtriya Janata Dal.

Ansari claimed that the decision to change the political course in Bihar by coming out of the alliance would prove to be ‘disastrous’ for the state.

He said after the 2015 Bihar assembly polls, Kumar was being seen as an ‘alternative’, who could have become the prime minister in the future.

“But unfortunately, after achieving such a big stature, he has suddenly become too small,” Ansari said and exhorted the people to unite under Sharad Yadav’s leadership ‘to save the country’.

The JD-U national executive committee meeting was held at the official residence of Kumar. The national council meeting and an open session of the party were held at the Rabindra Bhawan in Patna.

Sharad Yadav is all set to approach the Election Commission of India to claim the election symbol of the party -- 'arrow'.

He is likely to inform the poll body that the 'real party' is with him and not with Nitish Kumar.

"The real JD-U belongs to Sharad Yadav and party units in different states across India are with him. We will soon knock the door of the Election Commission to stake claim for the party’s symbol 'arrow'," Arun Srivastava said.

"It is Sharad Yadav who formed the JD-U, not Nitish Kumar," Srivastav said, pointing out that Nitish Kumar was a leader of the Samta party in Bihar then.

"It is a fact, there are no ifs and buts. Nitish Kumar is confined to Bihar only," he said.

Leaders from Sharad faction pointed out that while Nitish Kumar is holding the national executive at his official residence situated in a high-security VVIP area, covered with green trees and having clean roads, Sharad Yadav's meeting is for the common people.

"His meeting is open for all, unlike the one being held at 1, Anne Marg," former minister Ramai Ram, who is supporting Sharad Yadav said. 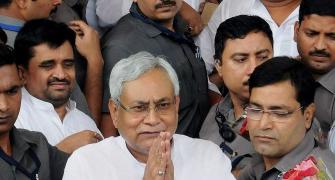 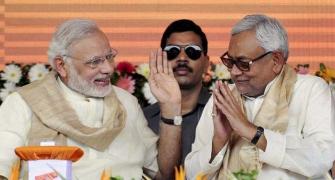 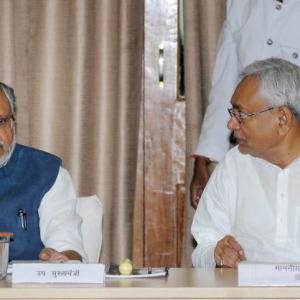 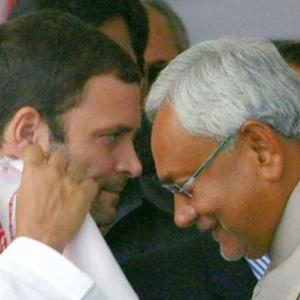