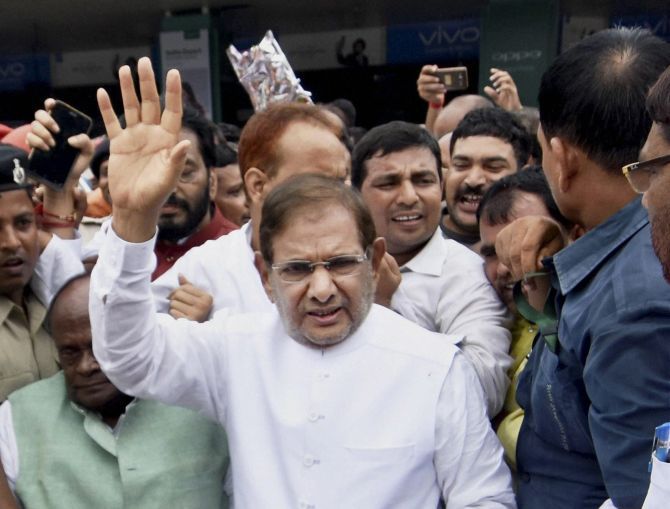 The rebel group of the Janata Dal-United led by Sharad Yadav is making efforts to form a 'grand alliance' against the Bharatiya Janata Party in Madhya Pradesh for the year-end assembly polls.

Sharad Yadav's supporters are trying to bring the Congress, the largest opposition party in the state, on board to put up a united fight against the saffron outfit which is in power in Madhya Pradesh since 2003.

The Congress, out of power in Madhya Pradesh for nearly 15 years, has also expressed its willingness to align with like-minded parties to take on the BJP.

"We are trying hard to form a 'mahagathbandhan' (grand alliance) in Madhya Pradesh with the help of the Congress," Govind Yadav, former president of the state unit of the JD-U and a confidant of Sharad Yadav, said.

In April, supporters of Sharad Yadav announced the formation of the Loktantrik Janata Dal, a new political outfit.

The former Union minister has made it clear he was not yet a member of the new party as his legal claim to represent the JD-U was still sub judice.

"To this end, we have already helped two tribal political parties to sink their differences and join hands. The Bharatiya Gondwana Party has aligned with the Gondwana Gantantra Party for the polls," added.

The BGP is a breakaway faction of the GGP which had won three seats in the 2003 assembly elections and eaten into the Congress' traditional tribal vote bank, Govind Yadav told PTI.

Both the tribal political parties have formed a coordination committee and decided to fight the elections, slated by the year-end, under the GGP's banner, said GGP national convener Gulzar Singh Markam.

The slipping away of the tribal vote from the Congress had benefited the BJP, which ousted the 10-year-old Digvijay Singh government in 2003, he added.

"We are going to hold a massive tribal meet on June 24 in Jabalpur - from where Sharad Yadav started his political career and become a member of the Lok Sabha for the first time in 1974," Markam said.

"We have invited Sharadji for the meet," he added.

Markam said tribals account for 18 per cent of Madhya Pradesh's population and play a key role in deciding the electoral outcome in a number of segments in the 230-member House.

"Our next move is to unite the Bahujan Sangarsh Dal, a breakaway faction of the BSP (Bahujan Samaj Party), with the parent party," Govind Yadav said.

After BSP leader Phool Singh Baraiya quit in 2003 and formed the BSD, the Mayawati-led party's electoral fortunes nosedived in Madhya Pradesh. Baraiya had served as the state unit chief of the Dalit outfit.

In 2013, the BSP managed to win just four Assembly seats.

"We are going to hold a massive rally on June 17 in Bhopal," Baraiya said, adding Sharad Yadav, Dalit leader Prakash Amdekar and BSP founder Kanshi Ram's sister Swarn Kaur have been invited for the function.

Prakash Amdekar, grandson of Dalit icon B R Amdekar, has already accepted our invite, he said.

"We, through some people, have sent a request to BSP chief Mayawati to attend the rally," he added.

"Dalits account for 15 per cent of MP population," Baraiya said.

A 'mahagathbandhan' led by the Congress is needed to oust the BJP from power in Madhya Pradesh, he said.

It is the right time for the non-BJP parties to join hands as this will help them strike a better seat-sharing deal with the Congress, Govind Yadav said.

If the Congress contests 150 seats and its allies the rest 80, nobody can stop the formation of a non-BJP government in Madhya Pradesh, the former MP JD-U president added.

"The Congress is going to align with like-minded parties to oust the BJP in the approaching Assembly elections in Madhya Pradesh," said state Congress chief spokesman Manak Agrawal.

Lemuel Lall in Bhopal
© Copyright 2022 PTI. All rights reserved. Republication or redistribution of PTI content, including by framing or similar means, is expressly prohibited without the prior written consent.