Union Home Minister Amit Shah on Tuesday alleged that 'Bhatija (nephew) and company' had swindled central funds sent for Amphan relief and said that probe will be ordered into it and culprits will be booked after the Bharatiya Janata Party comes to power in West Bengal. 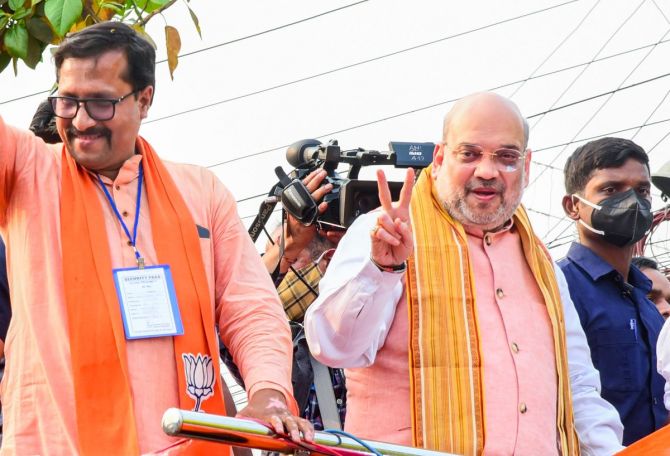 He criticised Trinamool Congress's 'cut money culture' and claimed that the Mamata Banerjee government in the state had swindled money sent for relief.

He also accused the ruling TMC of making scams out of the pro-people schemes brought by the Narendra Modi government.

Seeking to reach out to residents of the Sunderbans, the top BJP leader promised that the region will be made into a new district within a year if the party is voted to power.

Listing various projects for the Sundarbans region in the party's manifesto, Shah said the BJP government will work for the uplift of the fishermen in the area.

"The central government had sent relief funds for the affected people. But the TMC leaders siphoned off the funds and did not allow it to reach them.

"If we are voted to power, BJP will constitute an inquiry committee to probe corruption in the disbursement of funds. All those involved in scam will be sent to jail," he said addressing an election rally in Gosaba.

"The Centre had sent Rs 10,000 crore for Amphan relief. Did you get a single penny? Where did all the money go?

"Bhatija and company swindled the central funds sent for Amphan relief. We will probe everything and culprits would be put behind bars," he said.

He lambasted Chief Minister Mamata Banerjee and her government for not allowing implementation of central schemes in the state.

"Prime Minister Narendra Modiji is bringing pro-people schemes to help the poor. But the TMC is only interested in making scams out of those schemes. Modiji has formulated 115 schemes for the development of the poor, Mamta didi has made 115 scams to loot the poor," he said.

Lashing out at the 'dynastic politics' in TMC, Shah alleged that Banerjee has been working only for her nephew's welfare instead of the masses.

"Didi is only interested in making her nephew the next chief minister. Do you want the nephew to be the CM? If not, then vote for the BJP," he said.

Speaking on the development of the mangrove region, Shah said the Mamata Banerjee government had done nothing for it.

"During the 2016 election, Didi had promised to create a multiple integrated fisheries zone. But nothing has been done till date.

"Didi had said that she will make Sundarbans a district, but even this has not been done. We will do so within a year of BJP coming to power in the state," he said.

The union minister said that Rs 2 lakh crore will be spent on the region and a Sunderbans Development Board will be set up.

Shah criticised the TMC for not fulfilling its promises made in the past elections and asserted that the BJP has fulfilled what it promised in the country.

"Toilets, electricity, gas cylinders have been delivered to every poor person's house as promised by BJP. But Didi had made 282 promises in her previous manifesto and not even 82 of them have been fulfilled," he said.

Reaching out to the women of the state, Shah said that they will be given the facility of free transportation if BJP is voted to power.

Shah said BJP is ready to take on the 'goons and syndicates' of the ruling TMC.

"We have to end this syndicate rule of the TMC. We will end this culture.

"You think that we can get intimidated by the TMC goons? They cannot stall BJP's march to power. Once we are in power, every perpetrator of violence that led to the killing of BJP workers will be thrown behind bars," he asserted and claimed that TMC goons have so far killed more than 130 of its workers.

Reacting to Shah's allegation against the TMC of swindling of Amphan relief funds, the party said the Centre has 'hardly' given any rehabilitation funds.

"So from where does the question of siphoning off of funds arise. Lies, lies and more lies is what you can expect from an anti-people and anti-Bengali party like BJP. It seems sensing defeat in the coming poll they have lost it," TMC secretary general Partha Chatterjee said.

Later Shah held a 2 km mega roadshow in Medinipur area, which will go to the polls on April 27.

He was seen standing atop a decorated truck and waving at the gathering around him.

Elections to the 294 assembly seats will be held in eight phases from March 27 to April 29. Votes will be counted on May 2.