Shah, Rajnath, Tomar meet PM ahead of talks with farmers

Ahead of the crucial meeting with protesting farmer organisations, Union ministers, including Rajnath Singh and Amit Shah, met Prime Minister Narendra Modi to deliberate over proposals likely to be made to the agitating groups, sources said on Saturday. 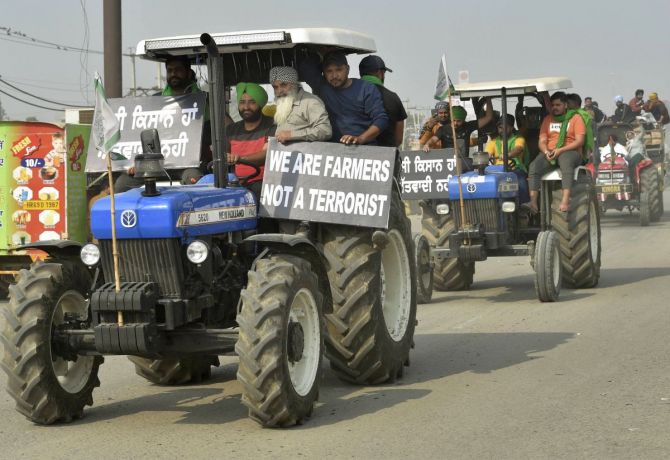 Agriculture Minister Narendra Singh Tomar and Railway Minister Piyush Goyal were also present in the meeting with the prime minister, they said.

Farmers are scheduled to meet Union ministers for fifth-round of talks on the new farm laws this afternoon after the government conveyed its proposals or concessions which it can offer to them, the sources said.

Earlier, Rajnath Singh and Amit Shah were leading deliberations among Union ministers to resolve the issues raised by the agitating farmers.

Modi's decision to hold deliberations with Union ministers, who have so far been the face of the Centre's efforts to end the farmers' agitation, signifies the importance the prime minister has attached to defuse the crisis, the sources said.

Speaking to ANI, Tomar said that government is still hopeful and it is on the discussion table that they will know what more farmers want.

"I am hopeful and will only go by what transpires in the meeting and not on statements given by farmers outside the meeting," he added while responding to farmer leader Baldev Singh Sirsa's statement that even written promise of MSP won't make them stop the agitation against three laws.

This is the first time that Prime Minister Modi has held a meeting with his ministers over the issue.

The fourth-round of talks between the government and agitating farmer unions on Thursday failed to end the standoff over the new farm laws.