Shah lauds Yogi, says UP on top in law and order

Ahead of the 2022 Uttar Pradesh Assembly elections, Union Home Minister Amit Shah on Sunday praised the Yogi Adityanath government for taking the state to the 'top spot' in terms of law and order. 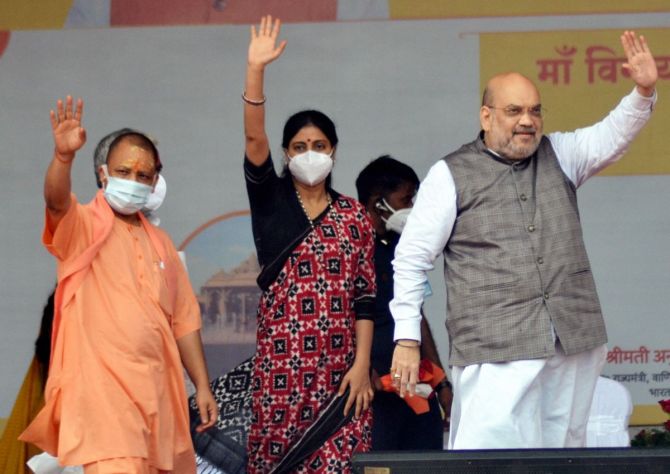 Addressing a function after laying the foundation stone of the Uttar Pradesh State Institute of Forensic Sciences in Lucknow, Shah said Bharatiya Janata Party governments work for the development of the poorest people.

"For six years till 2019, I travelled a lot in UP. Hence, I know the earlier UP very well. There was an atmosphere of fear in western UP because of which people were leaving the area, women felt unsafe, the land mafia was grabbing the land of the poor people, incidents of firing in broad daylight and riots were rampant," Shah said.

"In 2017, the BJP promised that we will make UP a developed state and also revamp its law and order. Today in 2021, I can say with pride that Yogi Adityanath and his team have taken UP to the top spot in terms of law and order," he added.

Later, Shah laid the foundation of the Maa Vindhyavasini Corridor Project and inaugurated a ropeway in Mirzapur.

Addressing a gathering in Mirzapur, he took an apparent swipe at the Samajwadi Party, the Bahujan Samaj Party and the Congress, and said those who governed Uttar Pradesh earlier had not done development of Hindu religious centres due to their vote-bank politics.

"I want to ask those who were in power earlier as to why the Ram temple was not constructed? Why was development of Braj region not undertaken? Why nothing was done for development of Chitrakoot where Lord Ram spent over 11 years? Why was the corridor of Maa Vindhyavasini not built?... Because you were afraid of vote-bank politics," he said, adding that it pained people.

"The BJP does not practise vote-bank politics, hence its government gave a tangible shape to the development of these religious centres," he said.

He said Naxalism has been completely eliminated in Uttar Pradesh, and the property of the mafia is being seized. There has been a reduction in crimes such as loot, dacoity and murder, he said.

He then visited Varanasi and offered prayers at the Kashi Vishwanath Temple.

He also inspected the construction work on the Vishwanath Dhaam Corridor in Varanasi, along with CM Adityanath.

After the inspection, he left for Delhi.

CM Adityanath, along with Deputy Chief Ministers Keshav Prasad Maurya and Dinesh Sharma, was present at the Lucknow event.

Terming the chief minister as 'yashasvi' (glorious) and 'safal' (successful), Shah credited him for effectively implementing development and welfare schemes in the state.

Today, in 44 development schemes, UP is on the top spot in the country. Making schemes is very easy, but implementing them, removing the intermediaries, and ensuring the benefits reach the beneficiaries without any bribe is very tough, he said.

"UP has made developments in every sector -- be it industrial investment, successful implementation of schemes, law and order, loan waiver and purchasing crops of poor farmers, sending money directly to the account of farmers, making toilets in houses, giving homes to the homeless, giving gas cylinders to 1.47 crore households among others," Shah said.

"In every sector, UP under the leadership of Yogi Adityanath has done very good work. The economy of the state grew from Rs 11 lakh crore to Rs 22 lakh crore in four years, and has become number two in the country," he added.

Shah also praised the Uttar Pradesh government for its management of the COVID-19 pandemic, and highlighted that the maximum vaccinations and tests were done in the state.

"Under the leadership of Modi ji, the BJP governments are working towards public welfare with sensitivity, and UP is ahead of all. I believe that for this transformation, the great public of UP had given an opportunity to the BJP to administer by giving more than 300 seats," he said.

"We had promised that the government will not be for a particular caste or family, it will be for everyone. And, today, I can say that we have moved ahead significantly," Shah said.

Hitting out at the opposition, Shah said the number of leaders who become active only after elections are announced, is the highest in Uttar Pradesh.

"They were not seen during the floods or Covid crisis. At the time, when it was needed to waive off the loans of farmers, they were busy in 'mauj-masti' (fun and frolic). They wear new clothes at the time of elections and come out," he said.

"Those who are dreaming (of winning the election) should brace themselves for another huge defeat. The BJP is going to form the government with a huge majority," he added.

Attacking Samajwadi Party chief Akhilesh Yadav, Shah said, Owing to the prevailing law and order at the time of Akhilesh Yadav's rule, the investors' meet had to be held outside Uttar Pradesh in Delhi.

In Mirzapur, he appealed to the people to vote for the BJP in the upcoming UP Assembly polls.

"You have blessed the BJP in 2014, 2017 and 2019. The Samajwadi Party, Bahujan Samaj Party and the Congress, everyone came together, but you did not falter. Your blessings kept on increasing. I am sure that the BJP's Yogi Adityanath government will get your blessings in 2022, and the BJP will form the government with a bigger majority than before," he said.