With the depression over the Bay of Bengal likely to intensify into a cyclonic storm by Tuesday and cross the coast as a severe cyclonic storm a day after, the Tamil Nadu government on Monday reviewed the situation, asking the respective district administrations to be on guard. 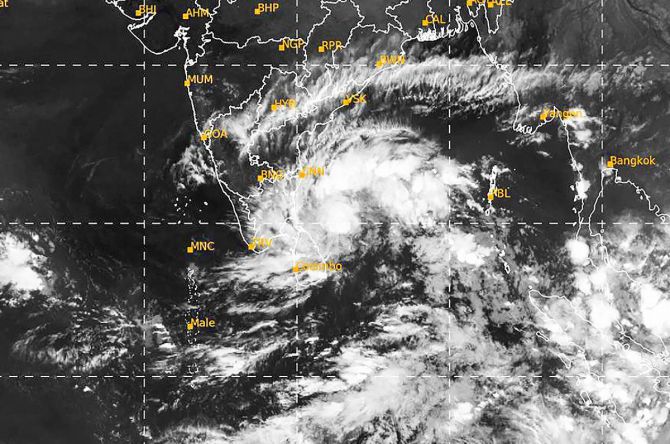 IMAGE: A depression is seen over the Bay of Bengal that is likely to intensify into a 'severe cyclonic storm' by Wednesday and cross the coast. Photograph: PTI Photo

The depression over southwest and adjoining southeast Bay of Bengal moved west-northwestwards with a speed of 11 kmph and lay centred at 1130 hrs of Monday over the same region, about 520 km east-southeast of Puducherry and 560 km southeast of Chennai, the Indian Meterological Department said.

The depression is very likely to intensify into a cyclonic storm during next 24 hours, the IMD said in a bulletin.

"It is very likely to move northwestwards and cross Tamil Nadu and Puducherry coasts between Karaikal and Mamallapuram around November 25 afternoon as a severe cyclonic storm with a wind speed of 100-110 kmph gusting to 120 kmph," it said.

Under its influence, widespread rainfall/thunderstorm were 'very likely' over Tamil Nadu, Puducherry and Karaikal during November 24 to 26, the IMD warned.

As a result, a high alert has been sounded in Nagapattinam and fishermen have been asked not to venture into the sea till November 26.

Tamil Nadu Chief Minister Edappadi K Palaniswami, who held a review meeting here,asked his cabinet colleagues and officials to remain fully alert and take appropriate precautionary measures to minimise the damage likely to be caused by the weather system.

Revenue Minister R B Udayakumar and Electricity Minister P Thangamani too expressed preparedness of their ministries to respond to any challenges arising due to the cyclone.

Udayakumar told reporters that all arrangements are in place to face the cyclone and special attention will be given to follow social distancing norms in the relief shelters owing to the COVID-19 pandemic.

Six teams of the National Disaster Response Force have left for Cuddalore district and all District Collectors have been instructed to take precautionary measures to face heavy rains.

Major lakes and reservoirs would be monitored to check the rising water level, he said.

Those living in low lying areas should immediately shift to relief camps, he said, adding, people in the areas prone for heavy rains should stock themselves with essentials, besides emergency lights, candles and matchboxes.

Thangamani said power supply will be cut off when the storm crosses the coast on November 25, as a precaution.

Cuddalore district has been given priority due to heavy rains.

About 1.5 lakh electric poles are available with the government, he added.