Seven more women members, including Meenakashi Lekhi, Shobha Karandlaje and Anupriya Singh Patel, joined the council of ministers of Prime Minister Narendra Modi on Wednesday, taking the overall female strength to 11 which is one of the highest. 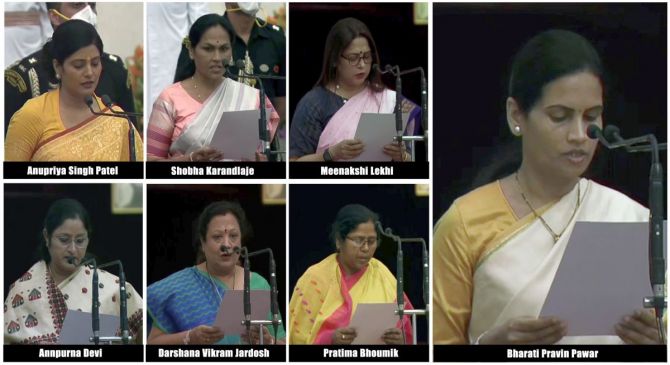 As many as 15 new cabinet ministers and 28 ministers of state were sworn in, taking the strength of the council of ministers to 78.

Among them, three are first-time MPs while Patel is making a comeback to the council of ministers as she was the Union Minister of State for Health under Prime Minister Modi earlier.

There were nine women in the first Modi government from 2014-19, including six in the cabinet.

Karandlaje, 54, is a Lok Sabha member from Udupi Chikmagalur in Karnataka and is serving her second term in the Lower House.

She has previously served as a cabinet minister in the Karnataka government, holding a range of portfolios like Food and Civil Supplies, Power, Rural Development and Panchayati Raj System.

Jardosh, 60, is a Lok Sabha member from Surat in Gujarat. She is serving her third term as an MP.

She has also been a Corporator of Surat Municipal Corporation and a member of the Gujarat Social Welfare Board.

Lekhi, 54, is a Lok Sabha member from New Delhi and is serving her second term as an MP. She is a Supreme Court lawyer and social worker.

Devi, 51, is a first-time Lok Sabha MP from Kodarma in Jharkhand. She has also been a four-time MLA from Jharkhand and Bihar and has served as a cabinet minister in the Jharkhand government.

She also served as Minister of State for Mines and Geology in the Bihar government at the young age of 30.

Bhoumik, 52, is a first-time Lok Sabha MP for Tripura West in Tripura. She comes from a humble background, and practices farming.

Pawar, 42, is also a first-time Lok Sabha member for Dindori in Maharashtra. She served as a member of Nashik Zila Parishad and worked for eradicating malnutrition and providing clean drinking water. Before joining politics, she was a medical practitioner.

Patel, 40, is a two-time Lok Sabha member from Mirzapur in Uttar Pradesh.