Separatists in PoK call for bandh in Kashmir on Friday

Peeved over the silence of leaders of separatist groups, their factions in Pakistan and in occupied-Kashmir are making desperate attempts to foment trouble in Jammu and Kashmir by giving calls from across the border for 'bandhs' and strikes to mark the death anniversary of Mirwaiz Farooq and Abdul Gani Lone, officials said on Thursday. 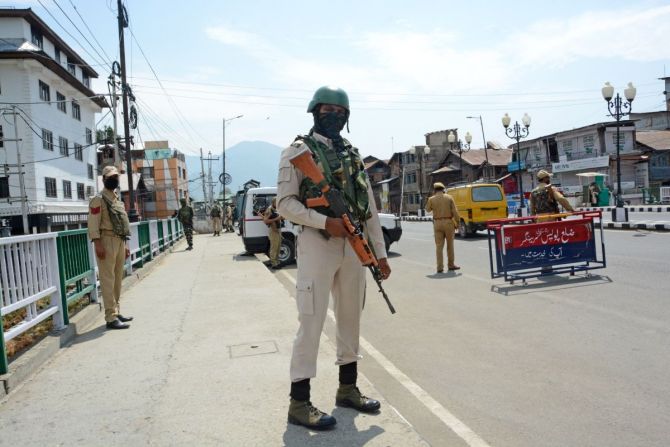 The death anniversary of both the leaders falls on Friday.

Farooq and Lone were killed by terrorists of the banned Hizbul Mujahideen in 1990 and 2002 for opposing growing gun culture in the Kashmir Valley. They were both considered advocates of finding a lasting solution through peaceful means.

Officials keeping a watch on developments in the union territory as well as monitoring activities of separatists and terror activities from across the border, noted that a release issued by the Awami Action Committee (AAC) earlier this week had urged people to pray for Mirwaiz Farooq at their homes due to the COVID-19 pandemic.

The AAC is being headed by Umer Farooq, who is the son of the assassinated religious leader and an anointed Mirwaiz or religious head.

However, peeved over this continued approach of not holding protests or giving 'hartal' calls, the faction of the moderate Hurriyat Conference in Pakistan-occupied-Kashmir on Wednesday issued a release calling for total shutdown besides holding demonstrations.

Separatists in Jammu and Kashmir have been maintaining a low profile after a series of raids by the Income Tax Department, the National Investigation Agency, the Central Bureau of Investigation and the Enforcement Directorate.

The agencies have questioned their funding pattern and even booked several second-rung leaders for indulging in anti-India activities.

Mirwaiz Farooq was shot dead by three terrorists on May 21, 1990, and it was conspired by then so-called commander of banned Hizbul Mujahideen Abdualla Bangroo.

Abdul Gani Lone was shot dead on the same day in 2002 at an Eidgah when he was on his way to pay homage to Farooq Mirwaiz.

What these two killings had in common was that both these leaders wanted Pakistan to stop aiding terror groups in the Valley, the officials said.

In the later part of 2000, Lone during a meeting had made it clear to the then Pakistan president Pervez Musharraf that Islamabad should stop arming terror groups in Kashmir, the officials said citing records of investigations carried out.

Lone before his assassination had indicated to the Pakistani establishment and the Inter-Services Intelligence (ISI) during a meeting in Dubai that he would be participating in the assembly elections that were slated to be held in 2002, they said.

However, before he could announce the same, he was silenced by the terrorists.

Lone's difference of opinion with the Pakistani establishment and continued rift with the Inter-Services Intelligence was becoming a major obstacle for Islamabad's Kashmir policy and his soft corner for democratic process in Jammu and Kashmir resulted in his assassination, the officials said.

The assassination seen as a warning to other Kashmiri leaders not to entertain any thoughts of entering electoral processes, they said.

Former chairman of the Hurriyat Conference, Abdul Gani Bhat, whose brother was also shot dead by terrorists, had said in one of his media interviews that 'Lone sahib, Mirwaiz Farooq were not killed by the army or the police. They were targeted by our own people'.

He had said about the non-involvement of the Indian government, and about indication of an 'insider job' pointing towards the involvement of Pakistan-supported non-state actors.