The Telugu Desam party on Monday suffered a setback when one of its senior leaders and legislators Pocharam Srinivas Reddy announced his resignation from the party as well as the assembly.

Srinivas Reddy, a former minister, told the media in his home constituency Banswada in Nizamabad district that he decided to quit the party because of the lack of clarity in its stand on the demand for a separate state of Telangana.

Reddy said that he had made up his mind to join the Telangana Rashtra Samiti as it had a clear position on the issue. "The time has come for a decisive move," he said.

He expressed his frustration over the lack of response from party president N Chandrababu Naidu to the demand of pro-Telangana leaders to spell out a clear stand.

"I have taken the decision after consulting my supporters, party leaders, workers and the ordinary people of my constituency. A true leader is the one who listens to the feelings and the views of the people," he said.

Several other leaders from Telangana region are considering following in the footsteps of Srinivas Reddy. A few days ago, rumours were rife that senior TDP leader and former minister from Mehbubnagar district Dr Nagam Janardhan Reddy was going to quit the party. But Dr Reddy, who is the convenor of the TDP's Telangana Forum, denied the reports.

Former union minister and legislator Venugopala Chary and member of legislative assembly A Suddala Devaiah were also reportedly thinking of quitting the party, under growing pressure of public opinion in their region.

The party leadership was also under tremendous pressure to follow in the footsteps of TRS and the Bharatiya Janata Party, which have decided to stay away from the all-party meeting convened by Home Minister P Chidambaram on January 6 to discuss the report of the Srikrishna Committee.

TRS and BJP have decided to boycott the meeting as the home minister has invited two representatives each from every party. TRS president K Chandrasekhar Rao has opposed   this move, saying the representatives of each party from two different regions will express contradictory views in support and against Telangana state.

"It will only increase the confusion and complicate the situation", he said.

The TDP's Telangana Forum will meet in Hyderabad on Tuesday and make a formal demand to boycott the meeting.

In another indication of growing pressure from the people, students of Kakatiya University in Warangal laid a siege at the residence of TDP legislator R Prakash Reddy, demanding that the party boycott the all-party meeting and support the demand for Telangana state.

However, an unruffled Congress party has decided to send two representatives -- Captain Uttam Kumar Reddy, a MLA from Telangana and K Sambasiva Rao, member of Parliament from Andhra, to the meeting.

Defending the decision, state Congress president D Srinivas said that the meeting was meant to only hand over the copies of the report to every party. He expressed hope that all the concerned parties will attend the meeting. 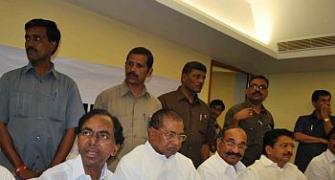 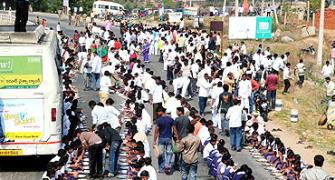 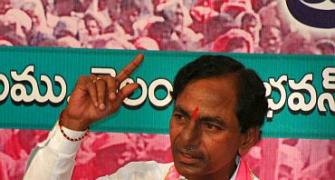