Defying the edict of the Congress high command, senior party leader and former Union minister KV Thomas on Thursday said he would take part in a seminar being organised by the ruling Communist Party of India-Marxist as part of its ongoing party congress in Kannur, but made it clear that he would not quit the party and remain as a Congressman till his last breath. An agitated Congress condemned the anti-party act of Thomas and said he will face stern action for violating the order of the high command.

The party high command had directed both Thomas and Thiruvananthapuram MP Shashi Tharoor not to attend the CPI-M seminar considering the protest by party's state unit which is at loggerheads with the Left government in the state over its move to implement semi-high speed railway project.

Announcing his decision at a press conference in Kochi, Thomas, who held coveted posts like Union minister and minister in the state government when the Congress was in power both at the Centre and in the state, alleged that he was humiliated to the core and subjected to harsh social media campaigns by certain partymen.

"I have decided to take part in the seminar. I will go there. I am not going to take part in a political programme of the CPI-M but in a national seminar. Issue is more important for me, not politics," said the senior leader, who had a strained relationship with the party leadership after he was denied tickets to contest in the 2019 Lok Sabha polls and in the state assembly polls held last year.

Justifying his decision to attend the seminar in Kannur, Thomas said various Congress leaders including Rahul Gandhi had taken part in several programmes in connection with the Marxist party and so there was nothing wrong for him to attend the programme on Centre-state relations, which has great national significance in the present political scenario.

Gandhi had even led an election campaign for the CPI-M in Coimbatore recently and then why objection was raised against this seminar and his participation, the multi-time MP said.

Thomas, once a close confidant of Congress chief Sonia Gandhi, said Tamil Nadu Chief Minister MK Stalin is also taking part in the seminar with him and sought to know whether the Congress leadership would decide not to have any further relationship with the DMK supremo over that.

DMK is a key ally of the Congress both at the Centre and in Tamil Nadu.

Though he reiterated his commitment to Sonia Gandhi throughout the press meet, Thomas didn't hide his displeasure towards Rahul Gandhi saying he could not meet him after December, 2018.

He also said the KPCC could not expel him from the party as he is an AICC member and only the high command could take any such decision.

Though he didn't elaborate about his political move, the senior leader said, "I will continue in Indian politics."

The CPI-M welcomed the Congress leader's move, asking how Jawaharlal Nehru's party could impose a ban on leaders from taking part in a seminar on secularism.

Besides Thomas, the CPI-M had invited Tharoor also for their seminar on centre-state relations, scheduled on April 9 as part of their party congress which got underway in Kannur on Tuesday.

Saying that it was the Congress leadership which should correct its mistakes, Thomas said it is the time for all secular forces which oppose the BJP and communalism to stand united.

The Congress has its own limitations in the present circumstance and so it could lead the country only if such parties are taken together, he said.

"The Congress and the CPI-M are rival parties in Kerala due to the significant political situation in the state. It is just an issue in the state. It should be set aside while considering national politics," he added.

Lashing out at the state Congress leadership and a section of leaders, Thomas alleged that he was even mocked by many of them calling him as Thirutha Thoma as he belonged to the fishermen community and winning the elections several times back to back was not his fault.

Thirutha is the name of grey mullet fish in local parlance.

Thomas also alleged that when he expressed his interest to take part in the CPI-M seminar, the KPCC chief threatened to oust him from the party.

Sudhakaran said the senior leader will face disciplinary action if he takes part in the seminar defying the AICC directive.

"Party discipline is applicable to everyone. If he defies the directive, the KPCC will recommend the AICC to take action against him," he told reporters in Thiruvananthapuram.

He also rejected Thomas's allegation that he had threatened him.

Welcoming Thomas's announcement, CPI-M state secretary Kodiyeri Balakrishnan said the senior Congress leader would not be left in the lurch if he is expelled from the Congress.

Thomas also dismissed the suggestion that getting the CPI-M ticket for the upcoming bypoll to the Thrikkakara Assembly seat was the reason behind his political move, saying he has already announced that he was not interested in contesting elections anymore. 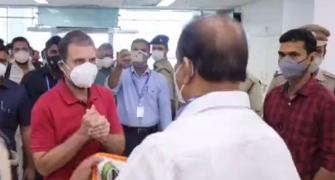 Rahul in Kerala as Congress firefights in Punjab