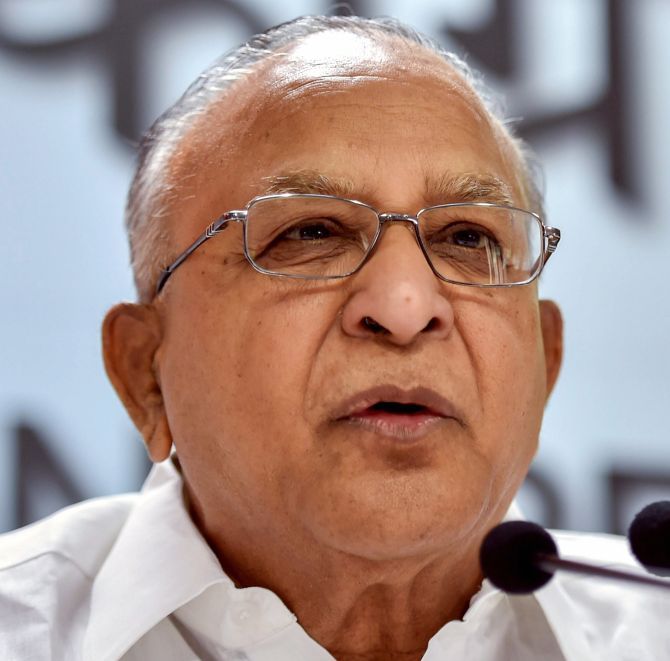 Senior Congress leader and former Union minister S Jaipal Reddy, who was known for his oratorical skills and carved a place for himself in Parliament and state assembly, died at a hospital in Hyderabad on Sunday.

The 77-year-old was recently diagnosed with pneumonia and was admitted to the hospital, where he died at 1.28 am, a Congress leader said.

He had agitated against the imposition of Emergency and came out of the party.

After coming out of the Congress, he joined the Janata party and contested against Indira Gandhi in Medak Lok Sabha constituency in 1980.

A parliamentarian for several decades, he held key portfolios in various governments.

He was conferred the Best Parliamentarian Award in 1998.

Later, he became the minister of petroleum and natural gas, but was shifted to the science and technology and earth sciences ministries, triggering a political storm.

Speaking to reporters at Jaipal Reddy's residence, Venkat Reddy said the state government should allocate a place for performing the last rites keeping in view the popularity of the leader.

"Sorry to hear of the passing of Shri S. Jaipal Reddy, former Union Minister. He was a thinking person's politician and an outstanding parliamentarian. My condolences to his family and many associates," the president said in a tweet.

Naidu said Reddy was his close friend of four decades and they used to sit next to each other in the Andhra Pradesh assembly.

"An exemplary orator, he was conferred 'Outstanding Parliamentarian Award' in 1998. With his razor sharp intellect and biting wit, he was also a powerful spokesperson of the party to which he belonged," the vice president said in his message.

"Shri Jaipal Reddy had years of experience in public life. He was respected as an articulate speaker and effective administrator. Saddened by his demise," the Prime Minister's Office tweeted quoting Modi.

Top Congress leaders also condoled the demise of Reddy, with Rahul Gandhi describing him as a distinguished parliamentarian and the son of Telangana.

"Deeply saddened by the untimely passing away of my friend and veteran Congress leader Shri Jaipal Reddy. He was a treasure of wisdom and knowledge. My condolences to the bereaved family," Singh said.

"An outstanding parliamentarian, great son of Telangana, he dedicated his entire life towards public service. My deepest condolences to his family & friends," he said.

Former Union finance minister P Chidambaram said he was deeply saddened by the passing away of Reddy.

"Behind every word that he spoke or wrote, there was deep scholarship and a passion that was remarkable. He effortlessly combined old world values and the new world's technologies," he said.

Chidambaram said Reddy would be greatly missed by his friends, admirers and the Telugu people.

"We are saddened to hear of the passing of former Union Minister Jaipal Reddy. A senior Congress leader, he served as an LS MP 5 times, an RS MP 2 times and as an MLA 4 times. We hope his family and friends find strength in their time of grief," the Congress tweeted.

Congress chief spokesperson Randeep Surjewala said he was extremely saddened at the unfortunate demise of Reddy.

"He stood for modern values of democracy and was known for impeccable honesty in administration. May his soul rest in peace," Surjewala tweeted.