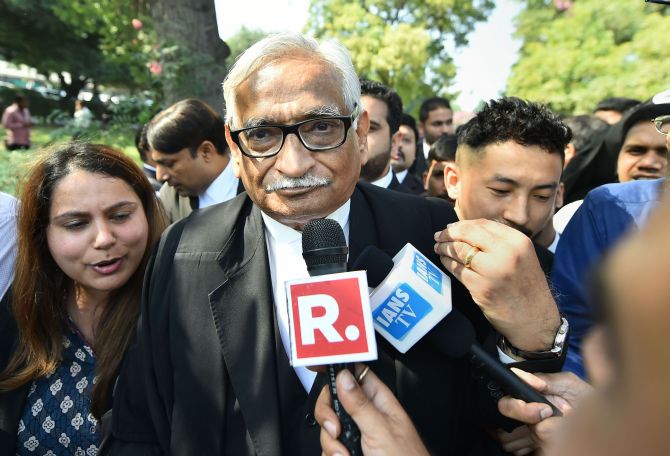 Senior advocate Rajeev Dhavan, a doyen of legal profession who represented the Muslim parties during the dramatic 40-day-long hearing of the Ayodhya title dispute case, had given up practice after a courtroom spat two years ago but he reconsidered his decision later.

And he drew praise for his representation of the Sunni Waqf Board and other Muslim parties in the sensitive case.

"We acknowledge the assistance rendered by Dr Rajeev Dhavan, senior counsel, who led the arguments. Their fairness to the cause which they espouse and to their opponents as, indeed, to the court during the course of the hearings has facilitated the completion of the hearings in the spirit that all sides have ultimately been engaged in the search of truth and justice," the Supreme Court said.

The 74-year-old senior advocate had given up practice following his courtroom spat with then Chief Justice of India Dipak Misra.

On December 11, 2017, he had called it quits after what he described was a 'humiliating end' to the Delhi government-Centre dispute case.

It was after an advocate representing some of the Muslim bodies in the title dispute case urged Dhavan to represent them in the matter, the senior counsel accepted the request.

Dhavan has lost his calm on several occasions, including on the concluding day of the Ayodhya hearing when he had torn up the pictorial map provided by a Hindu party purportedly showing the exact birthplace of Lord Ram, after which the All India Hindu Mahasabha wrote to the Bar Council of India demanding an apology from him.

During the hearing of the case, Dhavan had alleged that questions were asked only from them and not posed to the Hindu side, after which Chief Justice of India Ranjan Gogoi had asked a volley of questions to the lawyer representing the Hindu side.

An alumnus of Universities of Allahabad, Cambridge and London, Dhavan faced death threats in and outside the Supreme Court for representing Muslim parties in the case.

He faced death threats from an 88-year-old retired public servant who had written letters cursing Dhavan for appearing for Muslim parties.

Dhavan never minced words while expressing his displeasure inside courtrooms.

In 2016, then CJI T S Thakur openly remarked on his behaviour after an argument with him during the hearing in the Sahara chief Subrata Roy's case.

Deploring Dhavan's arguments, the bench remarked 'there are some senior advocates who are disrespectful to the court and play with its dignity. It was very unfortunate'.

"We don't need respect from lawyers as much as the institution does but you can't go on brow-beating judges," the judges said, clarifying the bench does not have problems with Dhavan.

"You should present your case politely. There should be threshold of tolerance," the bench said after another senior advocate Kapil Sibal tendered unconditional apology for Dhavan's remarks.

However, Dhavan remained defiant and said, "I don't apologise for what happened in court. It is not my fault at all. Cancelling someone's parole on the ground that the lawyer representing the person wanted to give a response on affidavit on something else is unjust."

Dhavan has represented a number of high-profile cases like the Ayodhya dispute, SEBI- Sahara, Rohingya refugees among others.