A Delhi court on Friday sentenced expelled Bharatiya Janata Party MLA Kuldeep Singh Sengar to life imprisonment till last breath in jail for raping a minor girl in Unnao in Uttar Pradesh in 2017, holding that as a public servant he betrayed people's faith. 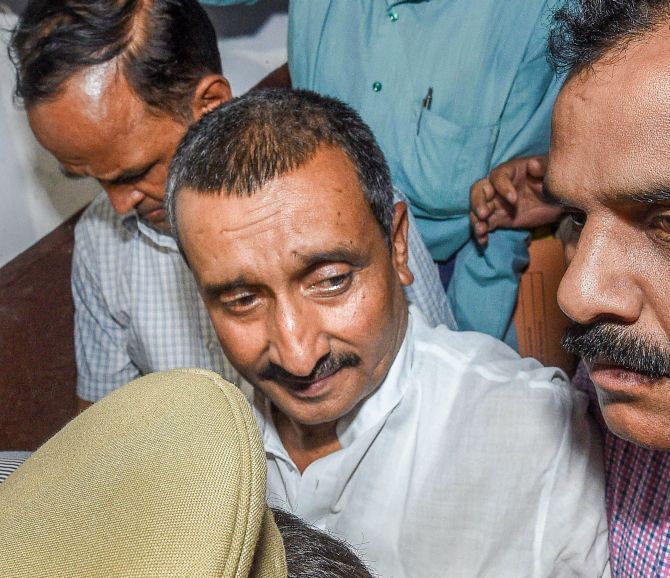 From police refusing to name the accused when the complaint was first filed to seeing her father tortured and killed, from her uncle being ensnared in an unrelated case to suffering an accident, which appeared to be a conspiracy, the quest for justice for the rape survivor has been arduous.

Pronouncing his order four days after convicting 53-year-old Sengar of rape, District Judge Dharmesh Sharma also imposed an exemplary fine of Rs 25 lakh on him and ordered it has to be paid within a month.

The judge at the same time made it clear that in case of non-payment, the Uttar Pradesh government will have to pay from the state coffers as provided in the Code of Criminal Procedure.

The family members of the rape victim said they had hoped that Sengar would be given death sentence as only capital punishment would have given them a feeling of security.

"Kuldeep Sengar should have been awarded death sentence so that we could have got full justice. We would have been satisfied only then as that would have ensured our security," said the victim's sister. The age of the victim at the time of the crime was stated to be 17 years.

Holding that the conduct of Sengar was to intimidate the rape victim, judge Sharma also directed that an additional Rs 10 lakh be paid as compensation to her mother.

"The convict Kuldeep Singh Sengar is hereby sentenced to undergo imprisonment for life, which shall mean imprisonment for the remainder of his natural biological life in terms of Section 376 (2) Indian Penal Code," the court said.

Sengar, who will be lodged in Tihar jail, broke down in the courtroom at Tis Hazari District Court complex after the judge pronounced the life sentence.

"This court does not find any mitigating circumstance, Sengar was public servant and betrayed people's faith," the judge said while declining the plea for lenient approach in sentencing him.

Besides, the court directed the Central Bureau of Investigation to continue assessing threat perception to the life and security of the survivor and her family members every three months.

It said they will continue to reside in rented accommodation made available by the Delhi Commission for Women for one more year and directed the UP government to pay Rs 15,000 per month for the rent.

"The CBI shall continue to assess threat perception to the life and security of the victim girl and her family members every three months from now and after expiry of the lease (of rented house), it shall ensure that the lease is further extended for a reasonable period of time and in any case adequate steps shall be taken by the CBI to ensure that the life and liberty of the victim girl and her family members remains secured including providing a safe house and/or change of identities, if so desired by the family.

"It is further provided that in case of any assistance, the CBI or the victim girl or her family members can approach the member secretary, Delhi Legal Services Authority or the District Witness protection Committee, Delhi for appropriate proceedings," the court said.

The court on Monday convicted Sengar for rape under the IPC and the POCSO Act for offence by a public servant committing penetrative sexual assault against a child after holding that the victim was a minor in 2017.

The court had said the victim's testimony was "truthful and unblemished" against a "powerful person".

The recent amendments made in August this year in the Protection of Children from Sexual Offences Act, which carries a provision of death penalty, did not come into effect as the incident took place in 2017 before the law was amended.

Convicting Sengar under the POCSO Act, the court said the CBI proved that the victim was a minor and he was rightly prosecuted under the special law.

The trial in the other four cases -- framing of the rape survivor's father in illegal firearms case, his death in judicial custody, conspiracy of Sengar with others in the accident case and the separate gang rape case of the survivor by three others -- is underway in the court.

Five days before the arrest, the victim tried to set herself ablaze near Chief Minister Yogi Adityanath's residence in Lucknow to protest alleged police inaction against the MLA.

She also alleged her family had been threatened. Sengar had denied all the allegations.