Disqualified Uttar Pradesh MLA Kuldeep Singh Sengar was on Friday handed down 10 years rigorous imprisonment, besides imposition of a fine of Rs 10 lakh, by a Delhi court for the death of Unnao rape victim's father in custody, saying "no leniency" can be shown for killing a family's "sole bread earner". 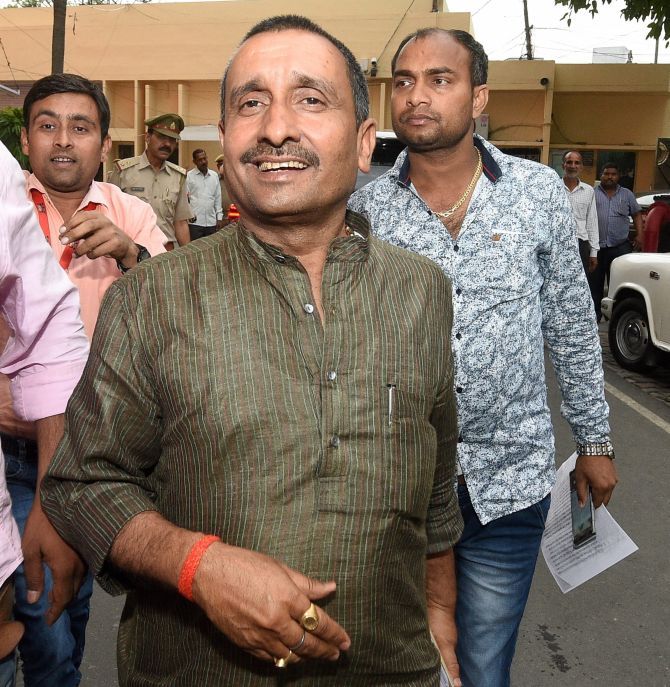 Sengar, who has already been sentenced to the "remainder of his natural biological life" for raping the minor Unnao girl, was stripped of his membership on February 25 as the lawmaker of the Uttar Pradesh assembly following his conviction in the rape case.

Pronouncing the sentence in a packed courtroom, District Judge Dharmesh Sharma also awarded 10 years jail term to Sengar's brother Atul Singh Sengar and five others for their role in the custodial killing of the father of the rape victim.

The court, which did not hold the accused guilty of murder under the IPC, awarded maximum sentence for the offence of culpable homicide not amounting to murder to convicts under section 304 of the IPC after holding that there was not intention to kill.

Sengar and his brother will have to pay Rs 10 lakh each as fine within three months to legal heirs of the deceased, including the rape victim, as compensation.

"Considering the minor children (of the deceased) losing their father who was sole bread winner of the family and keeping in mind the fact that the victim's family has been uprooted from their native place, all the convicts in the case are being sentenced to maximum punishment," the court said in its order.

The court further said Sengar and the co-convicts, two police officials, being public servants were supposed to uphold the law but there was no denying the fact that they broke the rule of law.

"The way crime has been committed, the victim's father was beaten up and paraded, no leniency can be given to the convicts and therefore, I am sentencing all the convicts to the maximum punishment," the judge said.

The court also directed the Uttar Pradesh government to take appropriate disciplinary proceedings for medical negligence against doctors who had treated the father when he was injured and in judicial custody.

The father of the rape victim was arrested at the behest of Sengar in the Arms Act and had died in custody on April 9, 2018 owing police brutalities in custody.

On March 4, Sengar, his brother and five others were convicted for the death of the victim's father in judicial custody.

The court, which sentenced all the convicts to maximum punishment under Indian Penal Code section 304 (culpable homicide not amounting to murder) and some other offences under the penal laws, also said that the four daughters and a son of the deceased has lost the protective cover of their father.

Besides ten years in prison for culpable homicide, Sengar, his brother, the then in-charge of Makhi Police Station in Unnao Ashok Singh Bhadauria and then sub-inspector K P Singh, Vineet Mishra, Birendra Singh and Shashi Pratap Singh have been also sentenced for other offences as well.

While awarding the sentence, the court made it clear that all the jail terms to the convicts shall run "concurrently".

The court had earlier acquitted other accused -- constable Amir Khan, Shailendra Singh, Ram Sharan Singh and Sharadveer Singh -- giving them the benefit of doubt in the custodial death case.

On December 20 last year, Sengar was sentenced to jail for "remainder of his natural biological life" in a separate case for raping the minor daughter of the deceased in 2017.

The Central Bureua of Investigation had examined 55 witnesses in support of the case and the defence had examined nine witnesses. The court had recorded the statements of the rape victim's uncle, mother, sister and one of her father's colleague who had claimed to be an eyewitness to the incident.

The chargesheet filed on July 13, 2018, said the victim's father and his co-worker were returning to their village, Makhi, when they asked Shashi for a lift.

Shashi denied them the lift, triggering an altercation among them, the CBI had alleged adding that Shashi called his associates, following which Kuldeep's brother Atul Singh Sengar reached the spot along with others and beat up the woman's father and his co-worker.

The woman's father was subsequently taken to the police station by them where an FIR was lodged against him and he was arrested for allegedly possessing illegal fire arms.

The chargesheet said that all this while, Kuldeep Sengar was in touch with the district police superintendent and Makhi police station in-charge Ashok Singh Bhadauria.

Later, he also spoke to the doctor who examined the rape victim's father.