Senator: Why is the US backing India's NSG membership?

Making nuclear exemptions for India, says Senator Edward Markey, 'only infuriates Pakistan and leads them to further increase their own nuclear capacities.'
Aziz Haniffa/Rediff.com reports from Washington, DC on a lively exchange in the US Senate over the Obama administration's decision to back India for NSG membership. 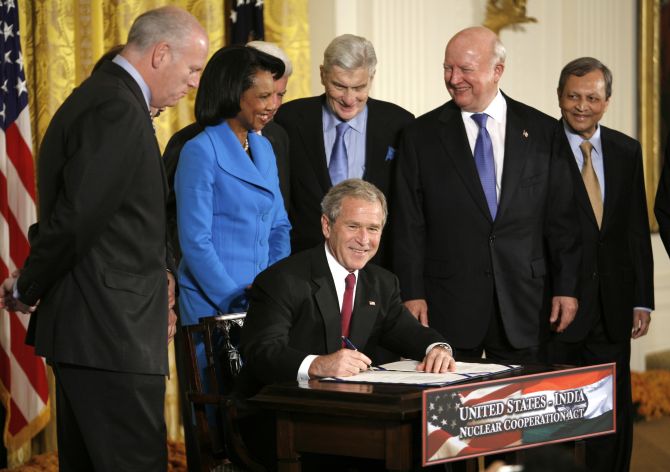 For several years, during his tenure in the US House of Representatives, Edward M Markey, Democrat from Massachusetts, was the undisputed nonproliferation ayatollah who fought any semblance of an attempt, let alone any in your face attempt to violate the Nuclear Nonproliferation Treaty or any of the US nonproliferation laws.

When the George W Bush administration beginning 2005 began its push to seek Congressional approval for the US-India civilian nuclear deal -- which required an exemption for India from several of US nonproliferation and other export laws, particularly since India was not a signatory to the NPT -- Markey was down in the trenches fighting the proposal tooth and nail to torpedo the deal.

Despite all of his valiant efforts to stop Congressional approval of the legislation, he and his cohorts were no match for the concerted coalition of the Bush administration, the pro-India lobby, America Inc and not least, the Indian-American community that cajoled even Democrats -- who didn't even want nuclear power reactors in the US -- into voting for the deal.

In 2012, Markey ran successfully for the US Senate and recently became a member of the powerful Senate Foreign Relations Committee.

On the eve of Prime Minister Narendra Modi's visit to the US, which prompted the Foreign Relations Committee to convene a hearing titled US-India Relations: Balancing Progress and Managing Expectations, Markey was back in the saddle implying administration hypocrisy vis-a-vis its commitment to nonproliferation and virtually arguing that Pakistan was justified in making the case that the US was willing to bend the rules when it came to India.

'Now, despite the lack of consensus in the Nuclear Suppliers Group on Indian membership, the Obama administration has decided to forcefully press for a vote on the issue in the coming months,' Markey added.

'Today,' the senator argued, 'we are not only granting India exemptions from global nonproliferation rules, but we are actually proposing to include India in the body that decides on those rules.'

Markey then asked Assistant Secretary of State for South Asian Affairs Nisha Desai Biswal, who was appearing before the committee how the administration could justify its proposed actions on India's behalf.

'Secretary Biswal,' Markey said, 'the Nuclear Suppliers Group has agreed to a set of factors that must be taken into account when considering whether to accept a new member. Among those factors is the State must be a party to the Nuclear Nonproliferation Treaty or an equivalent nonproliferation agreement, and that it must accept full-scope safeguards from the IAEA (International Atomic Energy Agency).'

Patronisingly, he told Biswal, 'In other words, Indian membership would require us either to set these factors aside or to revise them, and so, which of these two options, revising the rules or setting them aside, does the administration plan to pursue?'

When Biswal said, 'The President has reaffirmed that the US views that India meet not only the Missile Technology Control Regime but that it is also ready for NSG membership, and India...' Markey cut her off mid-sentence and repeated his question as to whether 'are you going to revise the rules for the membership or are you just going to set them aside? Which is the administration going to do?'

When Biswal began to waffle saying 'I do believe that, as you have stipulated, what the requirements are, that India has harmonised its export control with the Nuclear Suppliers Group and has adhered to...' Markey once again intervened and asserted that while New Delhi may have regarding export control, 'understand, they are not in compliance with the rules. So, which are they going to do? That is what is the administration going to do? Is it goi ng to ask for a revision of the rules, or just set aside the rules for India?'

Biswal tried once again saying, 'So, I do believe that in our engagement with the NSG, we have made the case that we believe India has complied with, and is consistent with the requirements of the NSG, and therefore should be considered for membership. Now, I don't believe that requires set aside,' Markey got snarky and told her, 'So, you are saying that you are not exempting India from the NSG membership guidelines and that they are in compliance with the guidelines? Is that the administration's perspective?'

'Our position,' Biswal said, 'is that India is very much consistent with the NSG guidelines.' To which Markey asked, 'Are they in compliance with the membership guidelines?'

Biswal, apparently realising that she was not getting through and Markey was probably on a path to embarrass her knowledge of the technicalities of the NSG and its membership rules, once again saying, India was in compliance with NSG guidelines, added, 'I'd be happy to take back and talk to our colleagues who negotiate on these issues to get the specific technical frame, but I do believe that it is our considered opinion that India has met the requirements and therefore should be considered.'

'I don't think any clear reading of the NPT or the NSG rules can lead to that logical conclusion -- I'll be honest with you,' Markey responded.

'And I guess what I would say to you, and maybe you can bring this back that it should also require some specific new nonproliferation commitments from India such as signature of the Comprehensive Test Ban Treaty, agreement to halt production of this material before pursuing full membership in the Nuclear Suppliers Group,' the senator added.

Markey then continued to lecture Biswal, saying, 'I think that would be a strong message. And why is that? It is because since 2008, when we also gave them an exemption, the country has continued to produce fissile material for its nuclear weapons programme virtually unchecked.'

'At that time, Pakistan warned us that the deal would increase the chances of a nuclear arms race. And, sure enough,' Markey added, 'since that time, Pakistan has declared its intention to give control over battlefield nuclear weapons to front-line military commanders.'

Pakistan, the senator said, had also 'declared its intention to use nuclear weapons earlier in a conflict with India,.'

'In your view,' Markey asked Biswal, 'how would granting a State specific exemption to India affect Pakistan's nuclear choices? Would it complicate efforts to get Pakistan to refrain from undertaking destabilising actions such as deploying battlefield nuclear weapons?'

And when Biswal replied that 'I do believe that we have a specific and separate dialogue with both countries to address both our concerns, and to...' Markey once again not allowing the State Department official to complete her answer, asked. 'Is there any relationship between what we do for India in terms of exempting them from rules and regulations, in terms -- as a result a response from Pakistan saying we're going to actually move closer and closer to the use or putting their nuclear weapons in a situation where they become more likely that they are going to be used?'

'I do believe that we address the interests of both countries on their own merits,' Biswal said. 'And we have very distinct and robust discussions with both countries as to what their aspirations are.'

Markey, again, being patronising, said, 'I do appreciate that,' but reiterated his contention that 'I just think that what you are doing is you are creating an action/reaction that is leading to a never ending escalation that ultimately brings these battlefield nuclear weapons closer and closer to the border of both these countries.'

'It is a dangerous policy,' the senator asserted, 'it is an unnecessary policy,' and warned, 'making these exemptions only infuriates Pakistan and leads them to further increase their own nuclear capacities.'

'It is a very dangerous long-term trend,' Markey said, 'especially in view of how concerned we are about those weapons in Pakistan potentially falling into the hands of non-State actors.'