Sena's Raut hails Tejashwi Yadav as 'man of the match'

Shiv Sena MP Sanjay Raut on Wednesday praised Rashtriya Janata Dal leader Tejashwi Yadav, saying that he has emerged as the "man of the match" in the Bihar assembly elections and will play a "pivotal role" in the 2024 Lok Sabha polls. 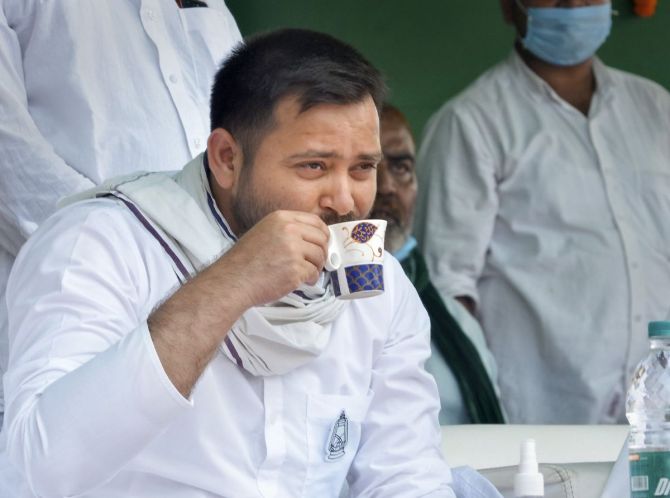 Talking to reporters, Raut expressed doubts over the stability of the next National Democratic Alliance government in Bihar.

In the 243-member House, the BJP-Janata Dal-United alliance has won 125 seats, where the simple majority mark is 123, while the opposition grand alliance has bagged 110 seats, he said.

"The majority is very thin and anything can happen. Chief Minister Nitish Kumar's party -- JD-U finished third and if anyone is celebrating the win, it's a joke. The BJP has done well, for which it had to do a lot of political strategising," he said.

"Chirag Paswan's LJP ensured the defeat of 20 JD-U candidates and Paswan is still in the NDA. This is a serious issue," Raut said.

"Nobody can vouch for the stability of the new government... I have heard that as the BJP wanted to clip Nitish Kumar's wings, it pitted Chirag Paswan against him," he alleged.

Raut said that even if Tejashwi Yadav could not become the chief minister, he has emerged as the man of the match.

"Bihar Assembly elections have given a very promising face like Tejashwi. BJP leaders, including Prime Minister Narendra Modi, should congratulate Tejashwi for putting up a good fight. Tejashwi will play a pivotal role in the next Lok Sabha elections," he said.

Devendra Fadnavis also needs to be credited for the BJP's success in Bihar as he was the party's poll in-charge apart from PM Modi, Raut added.

"If the BJP keeps its promise of making Nitish the state CM, he should give that credit to Shiv Sena. Everyone has witnessed in Maharashtra what happens when a promise is not kept," he said.

The BJP and Sena, which had fought the 2019 state polls together. However, their alliance fell apart over the issue of chief ministership. The Sena then joined hands with the Nationalist Congress Party and Congress to form the government.

Patil, who is Maharashtra unit chief of the ruling NCP, said Yadav's fight is "praiseworthy" and his victory lies in making the incumbent JD-U-BJP sweat in the election.

"Though the Bihar polls result is different (not in the RJD's favour), the fight put up by Tejashwi Yadav is praiseworthy. Made the ruling parties sweat till the last moment and there lies his victory. The youth should seekinspiration from him. Congratulations! Well done @yadavtejashwi," Patil tweeted.