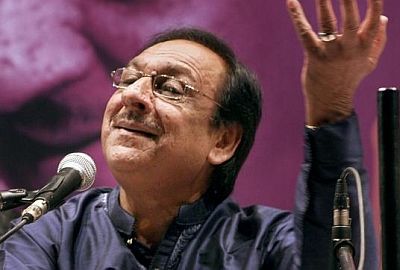 The Uttar Pradesh unit of Shiv Sena on Friday threatened to disrupt the scheduled concert of Pakistani ghazal maestro Ghulam Ali on December 3 during the Lucknow Mahotsav.

The Sena said if the state government did not want to invite any untoward incident during the Lucknow festival, it should desist from allowing Ghulam Ali to perform.

"If Ghulam Ali somehow manages to reach here to perform at the Lucknow Mahotsav as scheduled on December 3, we will make things worse for him than what was done with Sudheendra Kulkarni in Mumbai," state Sena chief Anil Singh said.

He said the Sena has always staunchly opposed Pakistani artistes performing in India, and Ghulam Ali certainly would not be an exception.

Kulkarni was attacked with black paint in Mumbai by activists of Shiv Sena, which is a coalition partner of the Bharatiya Janata Party in Maharashtra, before the launch of former Pakistan Foreign Minister Khurshid Mahmud Kasuri's book last month.

Lucknow District Magistrate Raj Shekhar has confirmed that after a talk with the 74-year-old ghazal maestro's son Aamir, Ghulam Ali's programme has been fixed at the Mahotsaav on December 3.

The Shiv Sena leader was equally critical of film star Shahrukh Khan and demanded that "All his sources of income as well as his properties in foreign land should also be probed."

The 10-day-long Lucknow festival, a cultural extravaganza organised annually between November 2 and December 5, has seen performances by noted musicians, poets, and comic artists.

Besides, the festival every year showcases Uttar Pradesh's art and culture and in particular Lucknow's 'ganga-jamuni tehzib' (composite culture) so as to promote tourism and traditional art forms and cuisine.