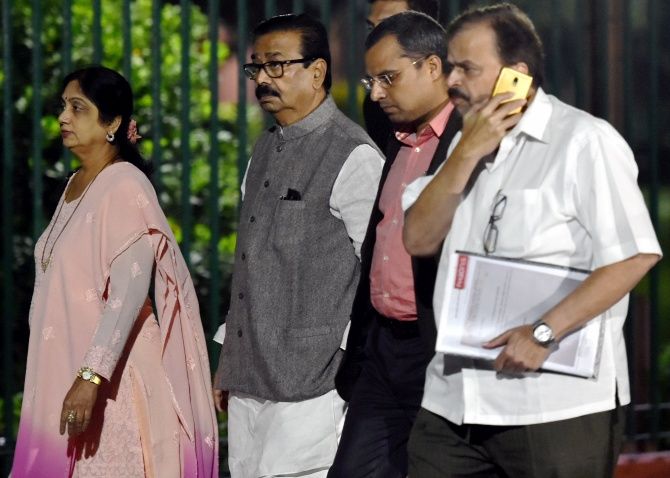 The three parties also sought a direction to Governor Bhagat Singh Koshyari to invite them to form government under the leadership of Sena chief Uddhav Thackeray, saying they have the support of more than 144 MLAs.

The petitioners alleged that the governor has acted in a "partisan manner" and allowed himself to be a "pawn in the BJP's illegal usurpation of power".

The parties further prayed for an "immediate floor test within 24 hours so as to avoid further horse trading and illegal maneuvers to somehow cobble up a majority from the Maha Vikas Aghadi".

Their lawyer Sunil Fernandes said the hearing is slated to commence at 11:30 am, but the composition of the bench is not known.

"It is submitted that the governor has acted in a partisan manner and made a mockery of the high office of governor," the plea said.

Koshyari's actions on the intervening night of Friday and Saturday, "culminating to swearing in on November 23 are textbook example of the governor acting at the behest of a political party in power at the Centre", it said.

The facts in the case demonstrate that the governor has "belittled the constitutional office and has allowed himself to be a pawn in the BJP's illegal usurpation of power", the plea stated. The governor's action in installing a "minority BJP" government is ex-facie illegal and unconstitutional, the petition, filed through advocate Fernandes, claimed, adding that the Shiv Sena-NCP-Congress combine has a "clear majority" in the 288-member state assembly and the BJP "clearly falls short of the halfway mark of 144".

Seeking quashing of the governor's decision inviting Fadnavis to form government, the plea said it is "unconstitutional, arbitrary and illegal", and violates Article 14 of the Constitution.

It said after comprehensive talks, the three parties finalised a common minimum programme for a post-poll alliance called MVA, and on November 22, it was announced that Uddhav Thackeray would be the alliance's chief ministerial candidate.

"Facing the prospect of a non-BJP government staking claim to power, the BJP on the intervening night of November 22 and 23 resorted to political machinations in an attempt to install a completely unconstitutional BJP government in the state," the plea said.

The Shiv Sena-NCP-Congress combine has also filed a separate application seeking direction for summoning of a special session of the assembly for swearing-in of MLAs and a floor test.

The parties should be permitted to prove its strength on the floor of the House by holding of a composite floor test, they demanded.

"In these circumstances the action of the governor in installing a minority government is ex-facie against the basic rule of law and the rule of parliamentary democracy that is rule by majority.

"More importantly the actions of the governor are entirely malafide and for extraneous considerations without even a prima facie satisfaction based on objective material that Fadnavis has majority support of the members of the house,” the application said.

It said any action of the governor in inviting a political party to form government has to be based on prima facie satisfaction and objective material which in the present case is completely conspicuous by its absence.

The application sought appropriate directions for “summoning a special session of the 14th Maharashtra legislative assembly with the only agenda of administering oath to the MLAs, immediately followed by the holding of a floor test on November 24".

"The gross malafide, arbitrariness and illegality is writ large on the face of the impugned actions of the governor as he has proceeded to swear-in a chief minister who is well short of the majority mark of 145 in the assembly by 40 MLAs," it said.

The governor on November 10 had turned down the invitation to form government for lack of numbers.

The application also sought direction for furnishing relevant records from the governor's office with regard to the invitation to Fadnavis to form government on Saturday, the satisfaction of the governor as to the support enjoyed by Fadnavis of a majority of MLAs in the assembly and his subsequent swearing in as the CM.