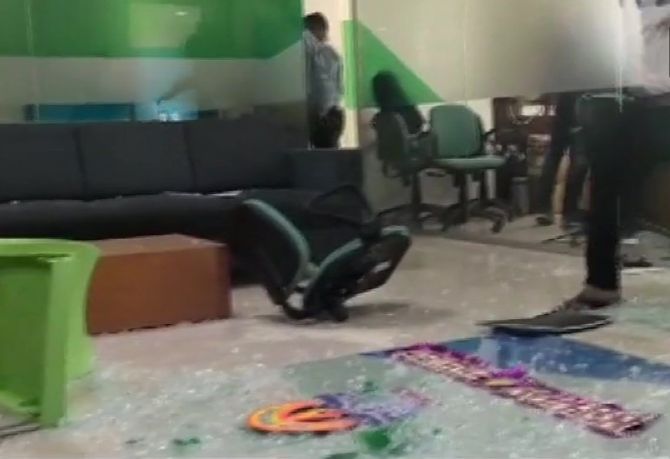 Members if the Shiv Sena ransacked the office of a private insurance company in Maharashtra's Pune city on Wednesday, while demanding that it clear the insurance
claims of farmers who suffered crop losses, police said.

Nearly 35 activists entered the Iffco Tokio General Insurance company's office, located in Koregaon Park area, at around 11 am and ransacked the premises before running away, Assistant Commissioner of Police Ravindra Rasal said.

Several computers, laptops, window glasses and furniture were damaged in the vandalism, an official at Koregaon police station said.

On getting information about the incident, the police rushed to the spot.

The attackers were demanding that farmers who suffered crop losses be given their insurance claims at the earliest, he said.

"They were raising slogans in support of the Shiv Sena. We are in the process of identifying the attackers," Rasal said.

The Shiv Sena recently said around 50 lakh farmers in the state have taken crop insurance, and asked the insurers to not create any hurdles in clearance of the claims.

As per an initial evaluation, crops like jowar, paddy, cotton, maize, tur and soyabean on 54.22 lakh hectares spread across 325 talukas in the state have been damaged.

During a Cabinet sub-committee meeting on Saturday, Chief Minister Devendra Fadnavis directed the officials concerned to review the ground situation in their respective areas and finalise details of the assistance to be provided.

The state witnessed unprecedented post monsoon showers this year, especially due to cyclones in the Arabian Sea.

Most of the crop damage due to untimely showers was caused in the second and third weeks of October.

He later said that Shah assured him to hold talks with insurance companies and help farmers who have incurred losses.