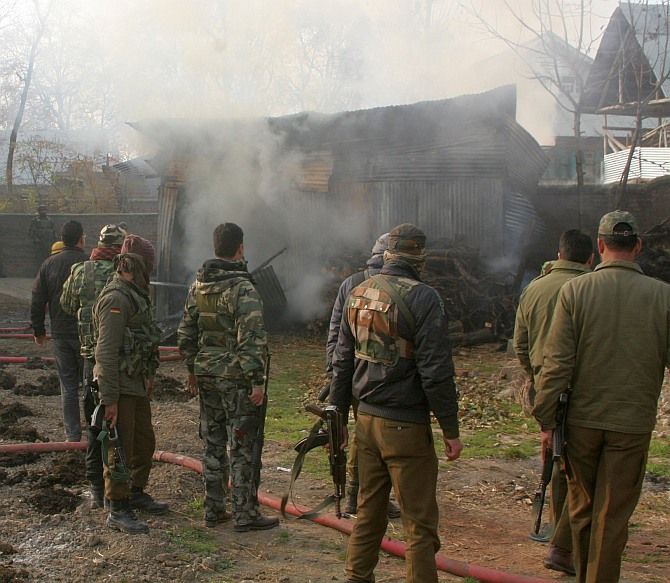 Soldiers of the Special Operation Group watch as smoke rises from the house where militants were hiding during an encounter in Srinagar. Photograph: Umar Ganie

Militants on Friday struck in a big way two days ahead of the Prime Minister's visit to Jammu and Kashmir, storming an Army camp in Uri in Baramulla district, killing 11 security personnel, including a Lieutenant colonel, and following it up with multiple attacks in Srinagar, Tral and Shopian.

A top LeT commander and seven militants were also killed in the incidents that left one civilian dead. 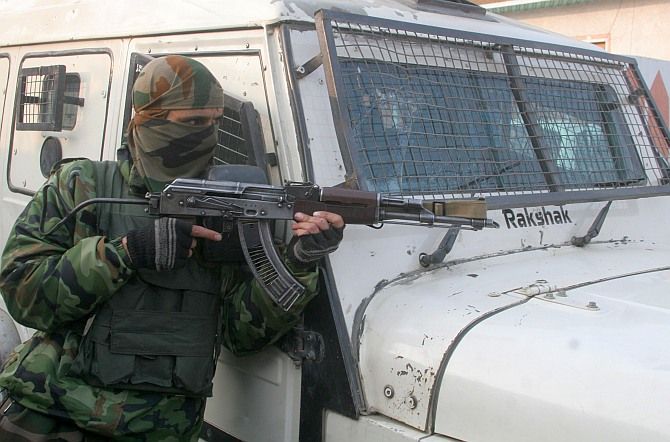 In a pre-dawn attack ahead of third phase of Jammu and Kashmir assembly elections on December 9, heavily armed militants killed 8 armymen and three policemen around 3.10 am at the army camp in Mohra in Uri tehsil of north Kashmir's Baramulla
district.

Six militants were also killed in the attack at the Army camp which is 20 km from the Line of Control (LoC), official sources said. 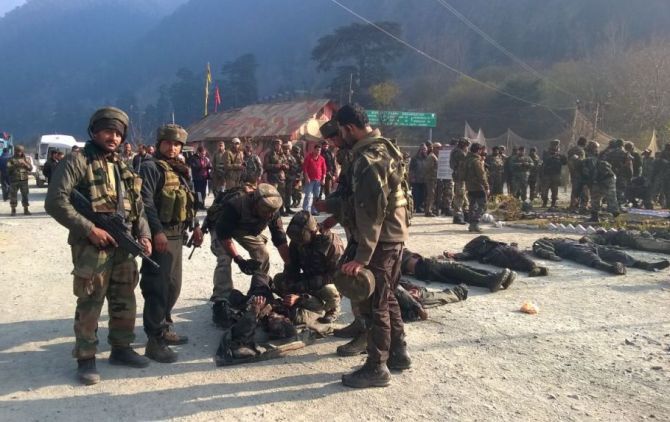 Army personnel with the six militants who were slain in the encounter in Uri. Photograph: ANI/Twitter

Lt Colonel Sankalp Kumar of Punjab Regiment and seven Army personnel were among the dead. While bodies of four army personnel were charred, one had burn injuries and the other three had bullet injuries, the sources said.

Uri is about 100 km northwest of Srinagar, where Prime Minister Narendra Modi is due to campaign on Monday.

A defence spokesman in a statement said, “A group of heavily armed and well equipped terrorists opened fire with automatic weapons at an army camp in Mohura around 3 am on Friday. Army troops from within the camp retaliated immediately and engaged the terrorists.”

“The troops from the neighbouring camps, who were already in a state of high alert, immediately mobilised their Quick Reaction Teams, rushing to the site and surrounding the area. In the ensuing fire fight, all six foreign terrorists were eliminated.

The official added that the encounter lasted just over six hours.  “During the operation, a barrack also caught fire, presumably because of a kerosene heater toppling, in which some soldiers got trapped. The operations continued relentlessly and by 9.30 am, the terrorists were eliminated. During the deliberate clearing up operations which commenced thereafter, the bodies of five more terrorists were recovered, bringing the total to six terrorists eliminated,” the spokesman said in a statement. 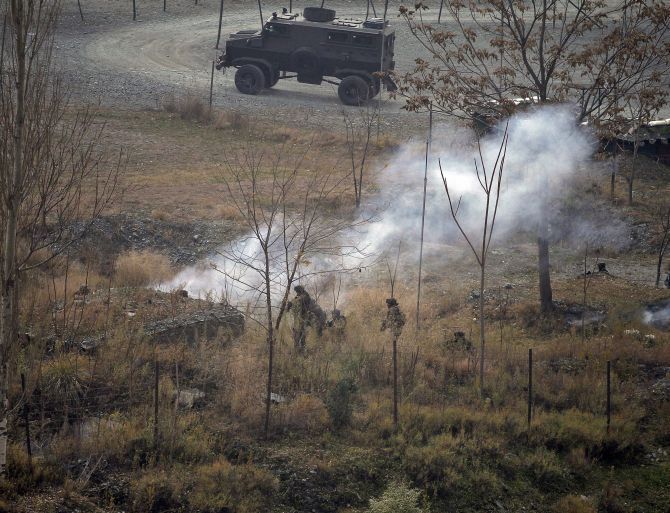 Soldiers search for suspected militants as smoke rises from a bunker after a gunbattle at Mohra, in Uri. Photograph: Danish Ismail/Reuters

In Rajouri of Jammu region, Union Home Minister Rajnath Singh said Pakistan should immediately take steps to stop this. "If Pakistan is facing problems in stopping this, then they should talk to India. We are willing to help them.

He said infiltration continues from across the border and the militants enter from Pakistan and create destruction here. "Is Pakistan not answerable to this?" he asked.

In Delhi, Defence Minister Manohar Parrikar said, “It is possible that this has happened because of elections... We will eliminate the remaining militants who are trapped.”

Jammu and Kashmir Chief Minister Omar Abdullah said the attack was a “desperate attempt” to disrupt peace and normalcy.

“Once again shows the desperate levels militants will go to disrupt peace and normalcy,” he tweeted.

Police said at least six terrorists had infiltrated into the Valley from Pakistan-occupied Kashmir recently. 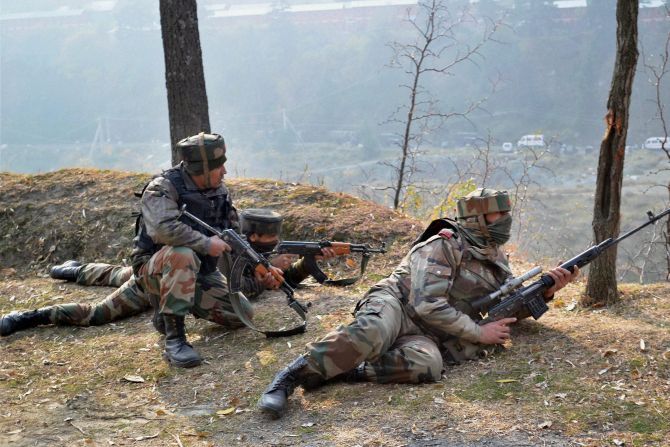 In Soura, security forces gunned down a top Lashkar-e-Tayiba 'commander' and his accomplice.

Police said the duo tried to flee when their car was stopped at a check-point at 90-feet road (Ahmadnagar) in Soura but were chased and in the ensuing gun battle, LeT 'commander' Qari Israr was gunned down. One AK-47 rifle was recovered from him.

The other militant, who took shelter in a cowshed of a nearby house, was also shot down after a brief exchange.

In the exchange of firing between the security forces and the holed-up militant, a grenade exploded inside the cowshed which caused fire, Inspector General of Police (Kashmir) Abdul Ghani Mir said, adding some weapons and explosives were recovered from the spot. 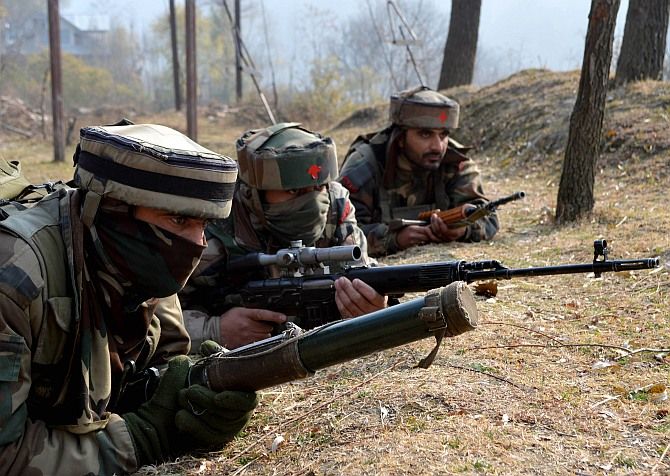 Mir said they had inputs about a militant module having entered Srinagar to carry out a major strike in the coming days.

"We developed the input and accordingly set up check-points," he said, adding the two slain militants were part of the module tasked with carrying out a big strike in coming days.

"We see it as a major success ahead of the Prime Minister's visit. The threat has been eliminated," he said.

Asked about the sudden spurt in militant attacks, Mir said the militancy in Kashmir has not ended. "There is still residual militancy in the Valley which we are dealing with."

The Prime Minister is scheduled to address an election rally at Sher-e-Kashmir Cricket Stadium here on December 8. The security across the city has already been beefed up with security forces carrying out random searches of vehicles entering the city. 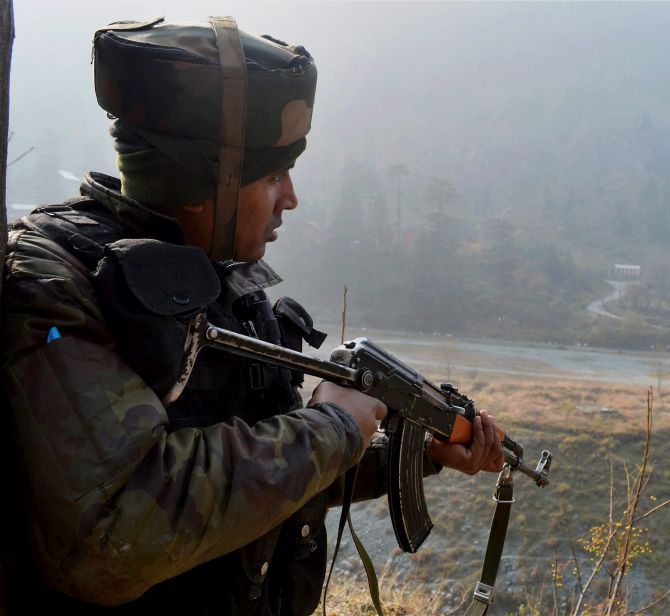 In Tral area of South Kashmir, one civilian was killed and six others injured when militants hurled a grenade at a crowded bus stand.

Police have intensified random search of vehicles following intelligence inputs that militants might carry out a suicide attack in the city ahead of the elections and the scheduled rally of the prime minister on Monday.

In the fourth terror attack, terrorists threw a hand grenade at a bus stand in Pulwama’s Tral area. One person was killed and six others were injured after terrorists lobbed a grenade on a security patrol at Tral bus stand. The whole area was cordoned off immediately after the blast and a hunt has been launched to nab the terrorists involved in the incident. No militant outfit has so far claimed responsibility for the attack.

Shopian area has been vulnerable as militants coming from Doda region through Peer Panjal Range have been using this area as a transit spot.

Condoling the death of security personnel and civilians in separate militant attacks in the Valley, Jammu and Kashmir Chief Minister Omar Abdullah expressed hope that the central government would plug the gaps in the counter-insurgency grid.

“It’s been a terrible day - four attacks and a number of deaths. Security forces and innocent civilians killed in the Valley,” Omar said.

“My heartfelt condolences to the families of those killed in the four attacks today. I hope @HMOIndia (home minister) takes steps to plug the gaps in counter-insurgency,” he wrote on Twitter.