Jammu and Kashmir Governor Satya Pal Malik on Monday night reviewed the security situation and emphasised the need for constant alertness and preparedness to deal with any eventuality, after the Centre scrapped Article 370 of the Constitution which accorded special status to the state. According to a Raj Bhawan spokesperson, the government held a meeting with top officials and reviewed the prevailing security and law and order scenario in the state.

Kumar, Skandan and Khan, who returned to Srinagar from Jammu after taking stock of essential services, briefed the governor about the adequacy of essential supplies and delivery of various public services to the people, including electricity, water supply and health care services.

The governor stressed the need for ensuring safety of general public and advised the administration to give due consideration to the genuine needs of people in the current scenario, the spokesman said.

Subrahmanyam informed the governor that there was no dearth of essential commodities in Kashmir Valley and that the stock would last for over three months. Reviewing the law and order situation and preparedness of the government machinery, Governor Malik emphasised the need for constant alertness, preparedness and synergy among various departments and agencies to enable dealing with emerging situation in a coordinated and effective manner.

The governor reiterated the need to constantly maintain a close watch on the ground situation and underlined the importance of sustained efforts to bring peace and harmony in the society for the overall benefit of people.

Governor Malik has appealed to the public and leaders of various social, religious and political organisations to cooperate with the government machinery in the maintenance of law and order in the state, the spokesperson said.

They said the Union home ministry has directed all Central Armed Police Forces and central security agencies to take "necessary precautions" and step up protection of their campuses and movements by issuing specific advisories.

"An advisory for remaining on a high alert mode has been issued to all the security forces across the country, especially for their units based in Jammu and Kashmir," a senior official said.

The ministry of home affairs alert is based on general inputs analysed after any important event.

The government has also told the state governments that "special care" should be taken of Jammu and Kashmir residents and students residing in their state. 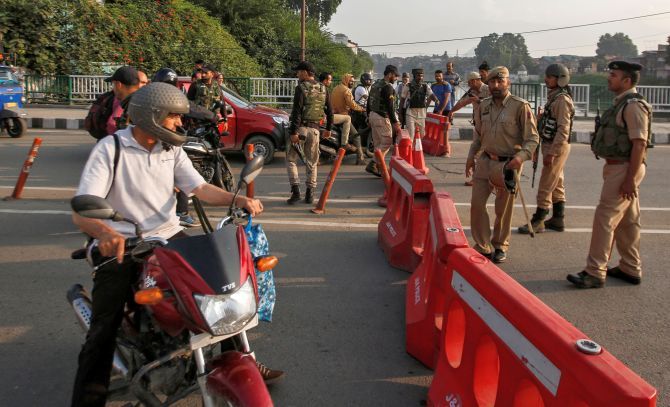 "Adequate publicity may be given to the measures taken by state governments and Union Territory administration to inspired confidence in the sections concerned and to sensitise the public against any mischief or breach of peace," it said.

Suitable instructions should be issued to law enforcement agencies to maintain vigil against circulation of false, unverified news, rumours, and unscrupulous messages on social media aimed at disturbing peace and public tranquility and inciting violence and communal discord, it said.

A 'high alert' has alos been sounded in the Delhi metro network.

A fresh advisory has been issued, over an existing one, to ensure that no untoward incident takes place in the mass-rapid rail network that runs across the National Capital Region, the security officials said.

Commuters will have to go through additional checks by the CISF personnel at many stations, the officials said.

The 'high alert' is based on non-specific inputs and it has been issued keeping in mind the latest developments in the Parliament on Jammu and Kashmir and the Independence Day celebrations slated for August 15, according to officials.

Additional Central Industrial Security Force troops, counter-terror reaction teams and security gadgets have been inducted to ensure that passengers face the least hassles while getting frisked and that any emergency situation is responded too quickly, the officials said. 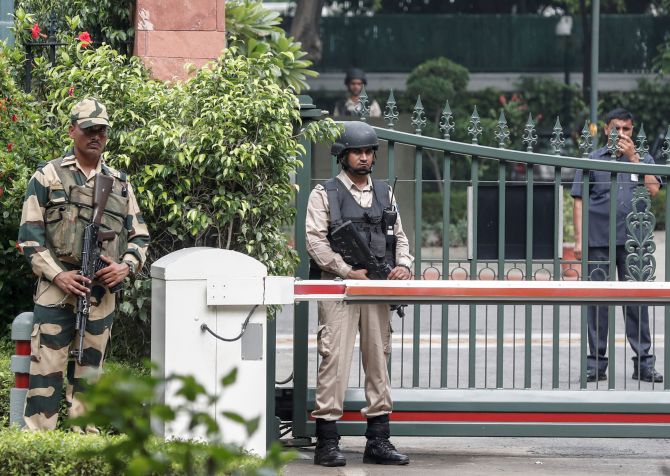 About 28 lakh commuters use over 220 stations of the Delhi Metro Rail Network daily to reach destinations in Delhi, Noida, Ghaziabad, Faridabad and Gurgaon.

The latest directive came after the government abolished Article 370 that gives special status on Jammu and Kashmir and also in view of the upcoming Independence Day celebrations.

On Monday, Union home minister Amit Shah moved a resolution in the Rajya Sabha stating that Article 370, which allowed Jammu and Kashmir to have its own Constitution, will no longer be applicable.