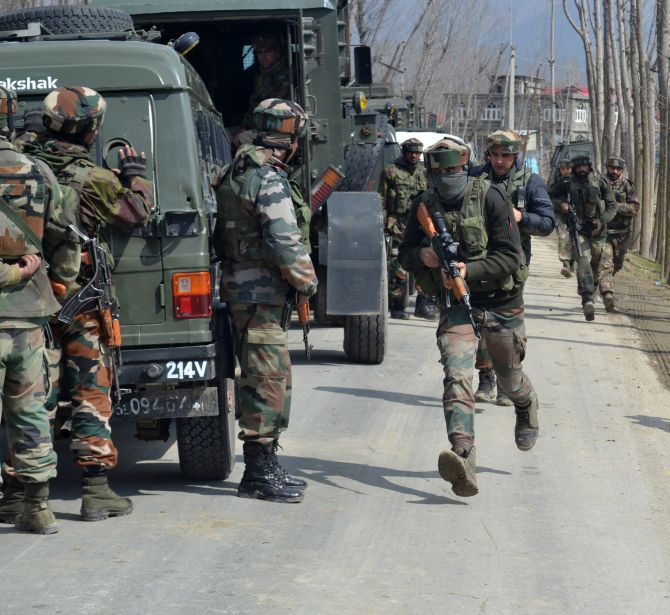 Six top terrorist commanders, including Lashkar-e-Tayiba's Abu Dujana, and Burhan Wani's successor Sabzar Ahmad Bhat of Hizbul Mujahideen, were among 132 terrorists killed in encounters with security forces in Jammu and Kashmir, so far this year, according to official figures.

Security forces and police are going after the terrorists, as they have fiercely intensified operations to hunt them down by acting on the hit-list of top terrorist leaders in Kashmir.

"As many as 132 terrorists have been killed in encounters with police and security forces in Kashmir Valley in over seven months this year," a senior security official said.

"The relentless operations by the security forces have defeated the desperate attempts by Pakistan and its agents to spread terror in Jammu and Kashmir. Operations will be continued," a senior Army officer said.

The slain terrorists included six top commanders of LeT and Hizbul Mujahideen who were killed in fierce encounters in Kashmir during the period.

Top LeT commander Abu Dujana, a Pakistani national wanted in connection with several terror attacks, and his aide, were gunned down on August 1 by security forces in Hakripora area of Pulwama district.

Dujana was wanted for many attacks on security forces and political workers in south Kashmir.

He was variously described as a category 'A' or 'A++' terrorist by Army and police officials. He was carrying a reward of Rs 10 lakh on his head.

On July 1, another top LeT commander Bashir Lashkari and terrorist Azad Malik were killed in a firefight with security forces in Anantnag's Brenti village of Dialgam belt in south Kashmir.

Lashkari was involved in the killing of six policemen in the district's Acchabal area on June 16.

On May 28, top Hizb terrorist Sabzar Ahmad Bhat, 27, who was a close associate of slain Hizb commander Burhan Wani, was among two terrorists killed in an encounter in Tral, in south Kashmir.

Sabzar, who was seen as the successor of Wani, dropped out of school in his Rathsuna hamlet in Pulwama to join the Hizb in March this year. Wani was killed on July 8 last year.

On July 12, Sajad Gilkar was among three Hizb terrorist killed by security forces in Budgam district of central Kashmir.

Gilkar had played a key role in the lynching of Mohammad Ayub Pandith, a deputy superintendent of police, near Jamia Masjid in Nowhatta area of capital Srinagar on June 22.

Besides them, top LeT commander Abu Haris was killed in Bandipora in north Kashmir on February 14, followed by killing of Abul Ali in Budgam on April 22, while Abul Mala, Anis Bhai and Abu Mansoor of LeT were killed in Kupwara on March 15, Abu Umar of LeT was killed in Sopore on January 3, Abu Maviya was shot dead in Bandipora on January 10 and Sher Gujri was slain in Pulwama on March 9.

Most of the encounters took place in south Kashmir's Pulwama, Shopian and Anantnag, apart from Bandipora and Kupwara in north Kashmir and Budgam in central Kashmir, sources said.

The hunt for commanders and terrorists of various outfits has been intensified under operational strategy, security officials said.

The counter-terrorist grid continued to maintain dominance and deny any space to the terrorists.

Synergised hard-intelligence-based joint ops with the J&K Police and Central Armed Police Forces have been the hallmark of these operations, they said.

Police and security forces pinned down and killed those involved involved in the killing of seven policemen and lynching of Pandith immediately, officials said, adding, that a massive hunt has been launched to track down LeT commander Abu Ismail who has emerged as the mastermind of the deadly attack on Amarnath pilgrims on July 10.

In June, the Army released a 'hit-list' of 12 top militants who it aims to 'go after'.

The hit-list carried the names and pictures of the terrorists along with the areas they are active in and the strikes carried out by them.

Some on the list, including Dujana, have been eliminated over the past one month or so.